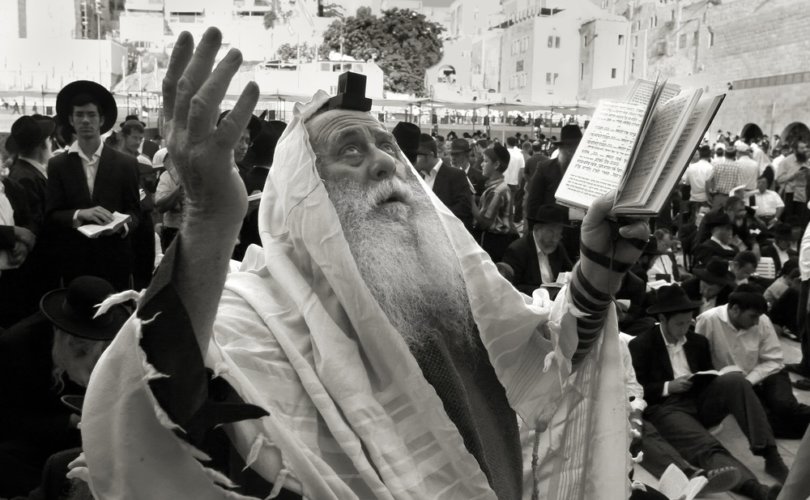 Rabbi prays at the Western Wall in Jerusalem on the day of 9 avva.Shutterstock.com

The group of more than 200 rabbis wrote the letter in support of Jerusalem Chief Rabbi Aryeh Stern whose comments against LGBT adoption have created a stir.

In the wake of Israel passing a law to prevent gay couples from obtaining children through surrogates, massive protests erupted in Jerusalem Sunday, drawing upwards of 100,000 people.

LGBT activists were decrying the Israeli government’s claim that it would be an “additional burden” on the child to be adopted by a same-sex couple.

Then, Rabbi Stern whipped LGBT groups into frenzy by reportedly stating it is a “fact that kids are entering very strange and unnatural lives of living without a mother and a father”. He also reportedly called acting out as an LGBT person “forbidden”.

In a letter, more than 200 orthodox rabbis backed him up.

“[He] simply voiced the eternal truth of our holy Torah and human normality, which the healthy majority in Israel identifies with,” the rabbis wrote in that letter.

They accused LGBT groups of using “aggressive terror accompanied by non-stop media brainwashing,” in attempts to turn “perverts into heroes.”

That LGBT agenda will not succeed nor will attempts to shut rabbis and sane people up and try to turn them into delusional extremists, the rabbis reportedly wrote.

“Rabbi Stern was protecting the children of Israel, who will be miserable if they aren’t adopted by normal families,” the rabbis claimed.

In some LGBT media, the idea children raised by gay couples would fare any worse was summarily dismissed.

There are studies that show either no differences between children raised in same-sex households and those in traditional families with a married mom and dad. Many of those studies have been criticized for methodological sloppiness.

And there’s a lot of evidence in other studies that show a family with a married mother and father remains the best way to raise a child.

In his study, Growing up with gay parents: What is the big deal?, Dr. Richard P. Fitzgibbons surveyed those studies.

Among his findings, Fitzgibbons noted when gay couples bring a child into the world with the help of a surrogate, that boy or girl is more likely to have trouble adjusting by the age of seven than other children.

Another difference the physician highlighted was revealed in a 2013 Canadian study which showed children of gay and lesbian couples are only about 65 per cent as likely to graduate from high school as children of married, traditional couples.

In addition, a 2009 study of women raised by gay or bisexual fathers showed they were less comfortable with closeness and intimacy, less able to trust and depend on others, and experienced more anxiety in relationships compared to women raised by heterosexual parents.

Other studies report rates of attention-deficit hyperactivity disorder and emotional problems being twice as high among children raised by same-sex parents as among the general population.

“An objective examination of social science research into how families function reveals clearly that children do best when raised by both a mother and a father,” concluded Fitzgibbons.

Prior to becoming Pope Benedict  XVI, Cardinal Joseph Ratzinger summarized what several scientific studies of same-sex couples have since indicated.

“The absence of complementarity in these unions (same sex) creates obstacles in the normal development of children who would be placed in the care of such persons,” wrote Ratzinger, then head of the Congregation for the Doctrine of the Faith. “They would be deprived of the experience of either fatherhood or motherhood.

“Allowing children to be adopted by persons living in such unions would actually mean doing violence to these children, in the sense that the condition of dependency would be used to place them in an environment that is not conducive to their full human development,” he said.