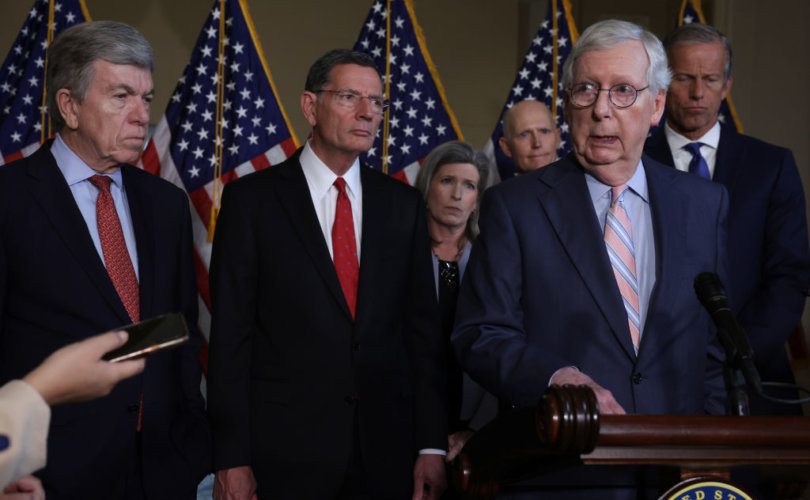 WASHINGTON, D.C. (LifeSiteNews) — Two-thousand religious leaders have signed a letter to the members of the U.S. Senate calling on them to reject a Democrat bill to codify forced recognition of same-sex “marriage” and open the door to federal recognition of polygamy, arguing that the view of marriage as a monogamous, procreative, man-woman union “should not be erased from or punished under our laws.”

HR 8404, the so-called “Respect for Marriage Act” (RMA) would repeal the longstanding (but unenforced) Defense of Marriage Act (which recognized marriage as a man-woman union in federal law and protected states’ rights to do the same), federally recognize any “marriage” lawfully performed by any state, and force every state to recognize any “marriage” of any other state “between 2 individuals,” without regard for “the sex, race, ethnicity, or national origin of those individuals.” States would only have to recognize one another’s same-sex “marriages,” but the federal government would have to recognize any new union a state comes up with, such as a marriage of more than two people.

In July, 47 House Republicans joined every House Democrat in voting to pass it, with the blessing of House Republican leaders Kevin McCarthy and Steve Scalise, and Senate Republican leader Mitch McConnell declined to stake out a public position on the legislation until Senate Majority Leader Chuck Schumer announced a decision on bringing it to the floor of the evenly-divided Senate.

“Simply put, H.R. 8404 would inflict an injustice on us, the members of our congregations and organizations, and the countless Americans we regularly serve who hold to the eternal truth that marriage is between one man and one woman,” reads the letter, which is being circulated by Alliance Defending Freedom and signed by an array of evangelical and other Christian pastors, ministers, and leaders of religious nonprofits.

They argue that the RMA “effectively deputizes interest groups to sue religious individuals, organizations, and businesses that operate according to” the natural view of marriage, endangering entities like “faith-based foster care providers and religious social service organizations that participate in a joint activity with the state or whose operations are entwined with government policies.”

“Should a state adopt polygamous or open marriages, marriages involving a minor or close relative, or time-bound marriages, the federal government would be bound by it,” the letter continues. “This would impact countless federal laws on marriage benefits, as well as the rights of parents and children.”

“The Internal Revenue Service (IRS) could move to strip our 501(c)(3) organizations of tax-exempt status should we hold fast to our belief that marriage is only between one man and one woman,” the signatories further warn. “Then-U.S. Solicitor General Donald Verrilli acknowledged this possibility during the Supreme Court’s Obergefell oral arguments, and the Respect for Marriage Act provides congressional support for the IRS to pursue the punishment of religious nonprofits.”

The letter serves as a counterweight to pressure currently being exerted on moderate Republicans by LGBT activists and their establishment allies to join Democrats in voting to pass the bill. Recently, more than 400 GOP insiders signed a letter urging support for the RMA.

Sen. Tammy Baldwin (D-WI), who has been heading Democrat outreach to Republican senators on the bill, claimed in late July to have secured enough additional GOP votes to pass it, though its prospects have since begun to appear less certain, due to concerns among moderate Republicans of the bill’s implications for religious liberty.

Amendments are reportedly in the works, ostensibly to clarify that the RMA would not affect religious liberty or conscience rights and that it would not permit polygamy. But whether such language would suffice against the preferences of activist judges is questionable, and it would not change the more fundamental issue of the bill effectively giving formal endorsement to Obergefell v. Hodges, the 2015 Supreme Court ruling that forced all fifty states to recognize same-sex “marriages.”

Politico adds that “[r]ight now no one knows ‘the exact answer’ to whether the same-sex marriage measure can overcome a filibuster, Minority Whip John Thune (R-SD) said Thursday, adding that GOP leadership has yet to formally count the votes. He signaled where he’s leaning: ‘If it’s what I think it’s going to be, I’m probably a no.’”

Democrat leader Schumer previously announced that the vote was planned for the end of September, but supporters now say a vote won’t be held until after the November midterm elections, which exempts senators up for reelection from having to face immediate consequences for an unpopular decision.

In any event, while Senate GOP leaders are neglecting to mobilize opposition to HR 8404, conservative groups such as ADF, Family Research Council, American Family Association, Concerned Women for America, and LifeSiteNews are picking up the slack. LifeSite is currently running a VoterVoice campaign to make Republican senators aware of grassroots opposition to HR 8404, and urging them to vote against it accordingly.