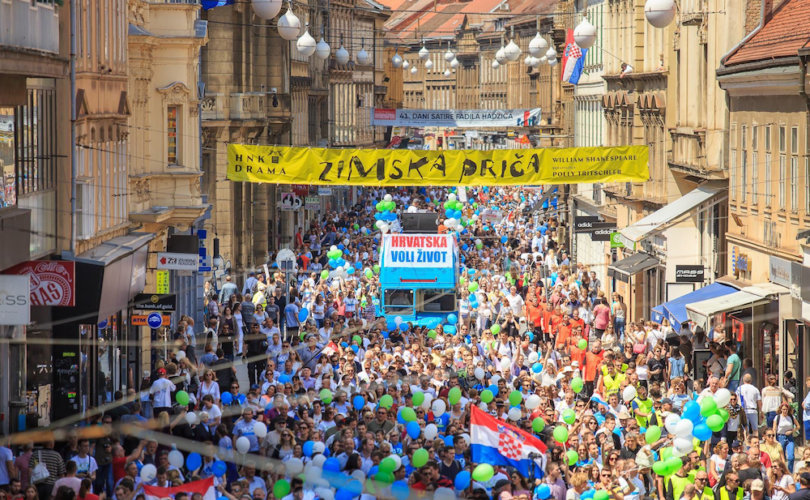 2017 March for Life in Zagreb, Croatia

ZAGREB, Croatia, March 23, 2017 (LifeSiteNews) — Thousands of Croatians, including the country’s deputy prime minister, turned out for the second annual March for Life on Saturday in the capital city of Zagreb and in Split on the southern coast.

An estimated 20,000 pro-lifers walked through the center of Zagreb and more than 5,000 through the center of Split. The march in each location attracted media attention at a time when the Constitutional Court of Croatia earlier this year handed down a decision that demands parliament to change the abortion law within the next two years.

Specifically, the Constitutional Court after 26 years of delay finally decided on the “constitutionality” of the abortion law that dates to 1978 during communist rule. The Court in essence declared the law to be unconstitutional and demanded a change in the law. For now, the existing law that allows abortion on demand until 10 weeks of pregnancy remains in place.

In another major pro-life action in the lead-up to the March, a nationwide petition to protect unborn children and help pregnant mothers was initiated by the prolife.hr platform. Tens of thousands of petitions were signed throughout the country and are currently being tallied. They will be presented to the government as a sign of support for the protection of unborn Croatians.

Although Croatia has a nominally conservative government for the most part, politicians and public personalities tend to respond to questions about abortion by saying they are personally against it but wouldn't change the law. The pro-life movement in Croatia is working to change attitudes from a culture of death to one that values life and protects the unborn.

In a sign of a changing tide, Davor Stier marched along with thousands of young people and young families in Zagreb. Stier is the country’s deputy prime minister and minister of foreign and European affairs. Earlier this year, Stier created an uproar  at an EU commission meeting by stating that Croatia officially does not consider abortion to be part of the agenda for “reproductive rights.”

Stier, who attended last year’s first March for Life as a European parliamentarian, came this year with his family and stated publicly that his political position has not caused him to change his values. He was joined in the crowd by Croatian European parliamentarian Marijana Petir and a candidate for the mayor of Zagreb, Bruna Esih.

Not even a smattering of militant feminist and secularist protesters could disrupt the festival atmosphere. The presence of thousands of young people virtually guarantees that Croatia has a vibrant and promising pro-life future apart from the anti-life mentality inherited from the communist period.