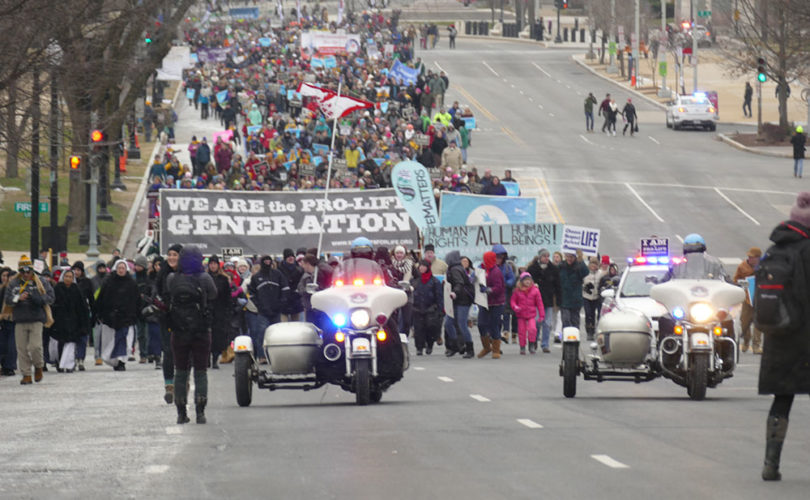 * CLICK ON BLUE ARROW ABOVE TO ADVANCE THROUGH ALL 59 PHOTOS *

WASHINGTON, D.C., January 22, 2016 (LifeSiteNews) – The blizzard snows are falling on the nation's capital, layering the city in a blanket of frost that could be two to three feet thick by tomorrow morning. But for awhile this afternoon, the 43rd annual March for Light brought an inner warmth to the city.

Numerous speakers made reference to the snow storm, which may dump up to two inches of snow an hour on Washington this evening.

“It's inspiring to see you all out here even with Snowmageddon barreling down on us,” said keynote speaker Carly Fiorina, the former Hewlett-Packard CEO and 2016 Republican presidential hopeful.

The weather references began with the first speaker, March for Life Chairman Patrick Kelly, who commended persevering pro-lifers determined to “make your voices heard when we have a major storm barreling down on Washington, D.C.”

Jeanne Mancini, president of the March for Life Education and Defense Fund, asked the chilly crowd, “Is anyone cold out there?” She was greeted by a unanimous chorus of marchers saying, “No!”

“A little snow couldn't keep you away, could it?” she continued to the half-frozen sea of resolute attendees.

Although D.C. police no longer record the size of crowds, several observers said about half as many people came to the 2016 March for Life as came to the predecessor, with weather playing a decisive role.

But those who came lit up the afternoon.

After introductory music and the pledge of allegiance, the march began with a prayer offered by Metropolitan Evangelos of the Greek Orthodox Church. He was joined by Ukrainian, Antiochian, and OCA Orthodox Christian bishops, as well as Roman Catholic bishops – and by the Little Sisters of the Poor, who are suing to prevent the Obama administration from forcing them to violate their conscience on the matter of contraception.

Later, Jim Daly of Focus on the Family thanked “the Catholic community” for “leading the way” in the fight for life – a fight he says evangelicals are joining wholeheartedly. “It has taken us awhile to get to the party, but we are with you,” he said.

This year's theme – “Pro-life and pro-woman go hand in hand” – was evident, as the speakers fought largely over reclaiming the mantle of mass protest movements of the past, from women's suffragettes to civil rights freedom riders.

Patrick Kelly, the chairman of the March for Life, called the march the “important human rights movement in the 21st century.”

Congressman Chris Smith, R-NJ, recounted pro-life legislative victories – some 282 laws protecting life and restricting abortion since 2010 – and said, “Someday soon, America will protect the weakest and most vulnerable. And into eternity, each and every one of you will have played a crucial part in that all-important human rights struggle.”

Numerous speakers tried to reclaim the title “feminist,” as well.

Marjorie Dannenfelser of the Susan B. Anthony List hailed women's suffrage leaders who decried abortion as barbaric and unthinkable.

Former Cosmopolitan magazine writer Sue Ellen Browder said she once “promoted abortion as the royal road to empowerment.” But now, she told attendees, she sees that “you – not Planned Parenthood, not NARAL Pro-Choice America, represent the authentic women's movement of the 21st century!”

“We are the new feminists of the 21st century,” she said. “We are not afraid, and we are not going away.”

And 2016 Republican presidential hopeful Carly Fiorina said secular progressive elites “have perverted feminism into a left-leaning political ideology, where women are pitted against men and used as a political weapon to win elections.”

Feminism does worse things than contribute to the politics of division and polarization. It hurts, and sometimes kills, women, March for Life President Jeanne Monahan-Mancini said.

“Abortion is not good for women, psychologically or physically,” Mancini said. Numerous studies show that post-abortive women may be at an elevated risk for a future premature birth, and a botched abortion may cause infertility.

And sometimes, it leaves liberated women dead on the table, like 18-year-old “Holly Patterson, who died of a 'safe, legal' abortion inside a Planned Parenthood.”

Or it may be the guilt of the abortion that leaves women dead or wounded. Jewels Green, a post-abortive woman who went on to work in the abortion industry in Pennsylvania, remembered how she attempted suicide just weeks after her abortion. “I spent a month in a psyhiatric unit to recover,” she said, flanked by members of the Silent No More Awareness Campaign.

“I don't want any woman to ever have to go through that,” Mancini said in her speech.”The fact is, pro-life is pro-woman, and that is why we march.”

Senator Joni Ernst, R-IA, said she would “reject” the notion that pro-life policies “constitute a war on women.”

“I will remind them that I am a woman, and I have been to war,” Ernst, a veteran, said, “and let me be clear, this is no war on women.”

This year, the march highlighted pro-life female legislators – like Ernst, Virginia Foxx, Vicky Hartzler, Marsha Blackburn, and many others – and they highlighted other march for life events in Canada, Ireland, Italy, Peru, and Mexico.

They hope this year's snow-drenched march will start a fire that spreads all over the world.

Abortionists think a baby ‘is only as good as the parts that can be sold from it’: Carly Fiorina to March for Life
Despite bitter cold, heavy snow fall, 2014 March for Life will go on: M4L President