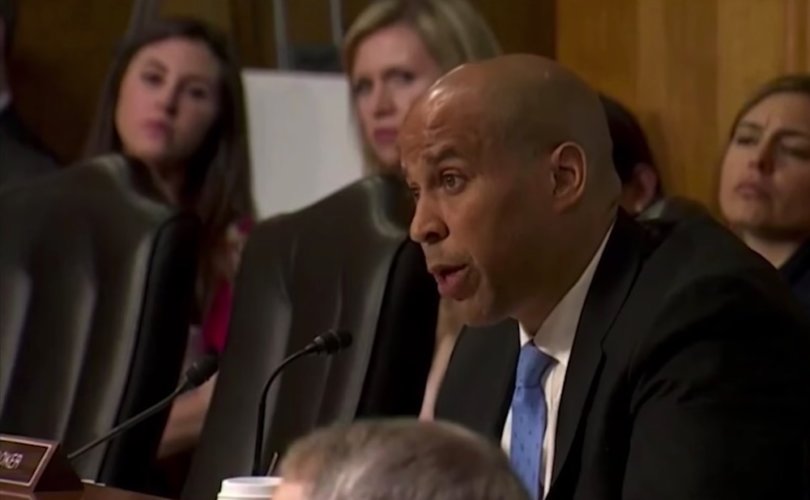 Rao, who has been nominated to replace now-Supreme Court Justice Brett Kavanaugh on the U.S. Court of Appeals for the D.C. Circuit, faced tough questioning from members of both parties on the Senate Judiciary Committee about her past writings on date rape and regulatory issues. However, Booker focused on Rao’s personal opinions on sexuality and same-sex “marriage.”

When Booker asked whether she had ever had an “LGBTQ law clerk,” Rao replied that she has never been a judge and is unaware of the sexual preferences of her employees.

Rao, 45, also told Booker that she would “faithfully follow precedent” and put “personal views” about homosexuality “to one side” if confirmed to the U.S. Court of Appeals for the D.C. Circuit.

Despite a Constitutional prohibition against subjecting office candidates to religious tests, Booker asked Rao, “Are gay relationships, in your opinion, immoral?”

“I'm not sure the relevance of that,” she answered.

Below is a partial transcript:

Booker: Do you believe they are a sin?

Rao: Senator, my personal views on any of these subjects are things I would put to one side, and I would faithfully follow precedent–

Booker: What, I didn't hear your response.

Ted Cruz: ‘I don’t believe this is a theological court of inquisition’

Senator Ted Cruz, R-TX, blasted Booker for his questions, saying that a confirmation hearing should not be “an avenue for persecution.” Troubled by Booker’s line of questioning, Cruz said, “We've seen a growing pattern among Senate Democrats of hostility to religious faith.”

Cruz reminded his fellow senators that the Constitution prohibits religious tests for public office and slammed Democrats for attacking “what they have characterized as ‘religious dogma,’” a reference to California Sen. Dianne Feinstein’s now-infamous 2017 jab at Amy Coney Barrett during her confirmation hearing.

“I don't believe this is a theological court of inquisition,” said Cruz. “I think the proper avenue of investigation is a nominee's record.”

Addressing Rao, Cruz said, “So let's look at your record, which is what this committee should be looking at, not our own personal religious views, or your religious views, whatever they may be.”

The third clause of Article VI of the U.S. Constitution states:

“The Senators and Representatives before mentioned, and the Members of the several State Legislatures, and all executive and judicial Officers, both of the United States and of the several States, shall be bound by Oath or Affirmation, to support this Constitution; but no religious Test shall ever be required as a Qualification to any Office or public Trust under the United States.”

Also this week, Archbishop Joseph E. Kurtz of Louisville, Kentucky sent a letter to Sen. Lindsey Graham, R-SC, chairman of the Senate Judiciary Committee, and Sen. Feinstein, ranking member, calling for an end to questioning judicial nominees about their religious faith. He said that such questioning “amounts to a religious test” for serving in office and is therefore unconstitutional.

“In recent months,” Archbishop Kurtz noted, “multiple nominees to the federal judiciary have been interrogated about their membership in the Knights of Columbus, with the implication that participation in the largest Catholic fraternal organization in the country – a respected organization that has accomplished so much good for over a century – could be disqualifying. To call out the Knights of Columbus for derision is simply appalling.”