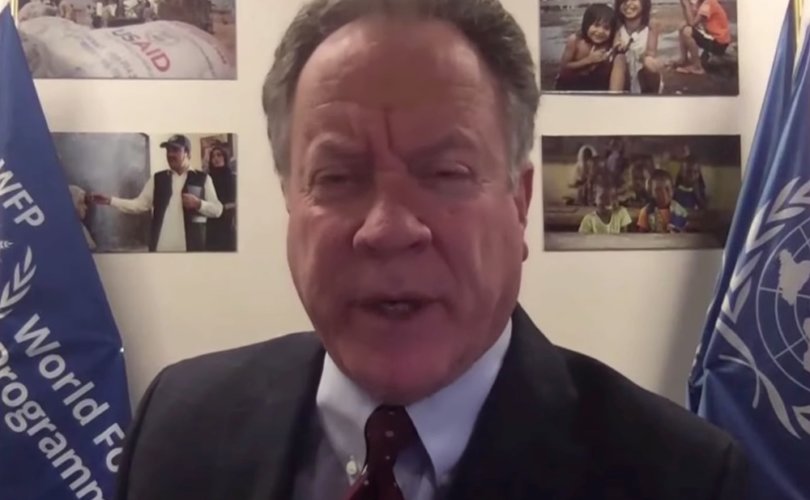 NEW YORK, N.Y. December 8, 2020 (LifeSiteNews) — The executive director of the United Nations World Food Program has warned that 270 million people are “marching to the brink of starvation.”

On Friday David Beasley, formerly a Republican governor of South Carolina, presented his findings to the U.N. General Assembly during a special session dedicated to the challenges presented by the COVID-19 coronavirus pandemic.

“2021 is literally going to be catastrophic based on what we’re seeing at this stage of the game,” Beasley said.

He reminded his hearers that he had warned the U.N. Security Council in April that that if the world was not careful the lockdown “cure” for COVID-19 “could be worse than the disease because of the economic ripple.”

“Back in April, the number of people marching to the brink of starvation had already risen from 80 million to 135 million in the last four years,” he said, indicating that this was primarily because of war and bad weather.

“But because of COVID, it’s now spiking from 135 million—not going to be bed hungry, now, literally marching towards starvation—to 270 million people.”

— Article continues below Petition —
PETITION: No to government and corporate penalties for refusing COVID-19 vaccine
Show Petition Text
102947 have signed the petition.
Let's get to 125000!
Thank you for signing this petition!
Add your signature:
Show Petition Text

In April, Beasley said he had said that if the world “acted strategically and effectively” it would be able to avert famine, destabilization, and migration. World leaders had responded with stimulus packages, he said, and had helped to “stabilize” the world for now. However, he believes that 2021 is “literally going to be catastrophic.”

“We spent 19 trillion dollars, [and] that money may not and will not most likely be available for 2021,” he said.

“Economic contraction is taking place, and the needs have doubled.”

However, if the World Food Program gets the funds it needs, Beasley promises that they will be about to avert famine, destabilization and migration.

“We got to be out there sooner than later,” he warned. “We already have famine knocking on the door of a dozen countries. We’re talking about in the next few months.”

He added that 2021 is going to be “the worst humanitarian crisis since the beginning of the United Nations.”

“We’re going to have to step up,” Beasley said.

“We’re not going to be able to fund everything, so we have to prioritize, as I say, the icebergs in front of the Titanic.”

These icebergs are famine, destabilization and mass migration. In an interview at the end of November, the World Food Program (WFP) chief indicated that it is cheaper to support a person in their own impoverished or war-torn country than as a refugee in Europe.

“You know, when you go back to the Syrian war, the European leaders did not step in at the right time, at the right place, and they paid a severe price,” Beasley told CBS’s Margaret Brennan.

“Syria was a nation of about 20 million people. The cost of supporting the Syrian in Syria is about 50 cents per day. That same Syrian ends up in Berlin or Brussels or London, it is 50 to 100 euros per day,” he continued.

“And we know that people don't want to leave home. But if they don't have food and they don't have some degree of peace and stability, they will do what any of us would do for our children. So it's a lot cheaper to come in and prevent the destabilization than it is to have war and conflict afterwards.”

“It is cheaper to go in and feed people where they are.”

Beasley said that 30 million people currently depend “100%” on the WFP, and added that the program assists 100 million people on any given day. The WFP supports people in three dozen countries. Meanwhile, U.S. tax payers are its biggest donors.

“[…] The United States has always been the most generous nation on Earth,” Beasley said.

“And I don't expect the United States to back down now, because it's going to be a lot cheaper to come in and do it right and prevent a lot of migration and a lot of destabilization and, in fact, a lot of deaths from hunger.”

“People are dying now. About every five seconds a child dies from hunger.”

However, Beasley is not relying solely on the average American taxpayer.

“We’re going to have to ask the billionaires to step up in a way they’ve never done before,” he said.