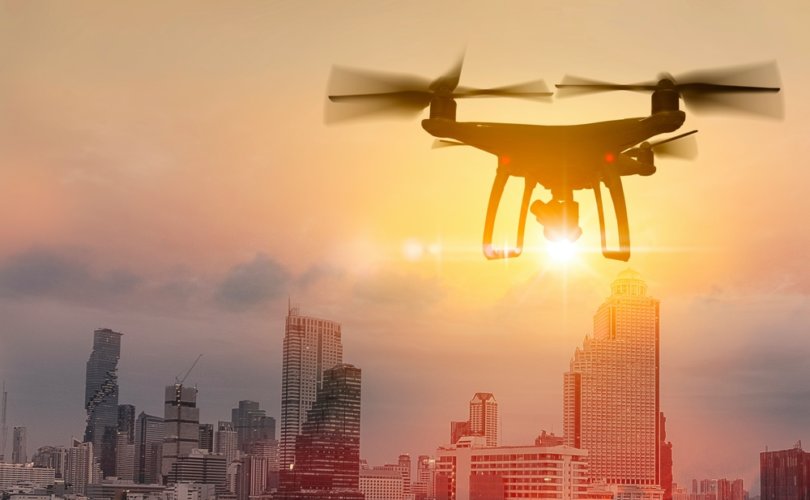 An MSNBC report features a New Jersey police department showing off the drones it uses to “enforce social distancing.” The report indicates the drones, which come from a Chinese company, have been widely disseminated across the U.S. to 43 agencies in 22 states.

Insane. Police are using drones to enforce social distancing by spying on Americans in their backyards. Police chief says invasion of privacy is worth it “if it saves one life.” At a certain point even the most obsequious bootlickers will have had enough

Austria's head Sebastian Kurz just announced that from May 15 on, public Masses will be allowed again! https://t.co/LhCYxgj5Mq

Franciscan University of Steubenville has announced it will cover the remainder of tuition costs, after scholarships and grants have been applied, for the fall 2020 semester for all incoming full-time undergraduate students enrolled in its on-campus programs.

President Father Dave Pivonka, TOR, said, “As a University, we feel called by God to ease the burden for students, so they can experience the irreplaceable value of a Franciscan University education. We’ve heard from many students whose concerns over the pandemic are making the decision to leave home for college more difficult. Also, many families and students have seen their ability to pay for college evaporate due to the economic impact of the coronavirus. We hope this unique response will help them to overcome these obstacles and uncertainties and step out in faith with us.”

Christendom College announced earlier this month it will refund $970,000 in room and board fees to students for the period that they have been away from campus due to the ongoing coronavirus pandemic. Dr. Matthew Tsakanikas, who heads Christendom’s theoloy department, is also making his New Evangelization & Catholic Apologetics course and select New Testament lectures available online for free, in order to help strengthen the faith of those confined to their homes.

April 21, 2020, 8:59 a.m. EST: Read about how Trump’s pandemic expert Dr. Anthony Fauci has called for the abolition of handshakes but not sex with strangers HERE.

“Tennessee Gov. Bill Lee (R) and Georgia Gov. Brian Kemp (R) announced Monday afternoon that they are taking the initial steps of allowing ‘non-essential’ businesses to reopen,” Reason reports. “The ‘vast majority’ of businesses in Tennessee will be permitted to restart their engines on May 1.”

April 20, 2020 (LifeSiteNews) – Americans continue to grow frustrated at attacks on their civil liberties. More and more have joined protests demanding their states reopen.

Facebook says it has removed the promotion of “anti-quarantine events” in California, New Jersey, and Nebraska after “consultation” with state governments.

We really want to set the precedent that tech platforms will remove protest events if government tells them to? No way that could go wrong https://t.co/21Zy1k5Iug

The Daily Wire has released a video montage of Americans being arrested or harassed by authorities for exercising basic constitutional rights or doing activities like surfing alone in the ocean during the pandemic.

At The Stream, Rachel Alexander has highlighted how researchers at the National Institutes of Health “claimed there weren’t enough resources to plan for both a flu pandemic and a coronavirus pandemic. So they skipped the clinical trials on treatments for the coronavirus. However, money abounded for all the frivolous studies NIH performed.”

Those taxpayer-funded studies included one on the effect of cocaine on honeybees (it makes them twice as likely to dance), giving sex steroids to male goldfish (they become “more social and swim closer to female goldfish”), and whether walking lengthens lifespan (it does).

The Society of St. Pius X (SSPX) was “fined £118 for holding an Easter Vigil Mass in its main Paris church during the Covid-19 lockdown,” The Tablet reports. They are contesting the fine.

The Family Research Council has published a new report on restrictions on freedom of religion during the coronavirus crisis.

Texas is slowly beginning to re-open this week.

CNA reports, “After receiving more than 300 letters during the coronavirus pandemic, the Italian bishops will entrust the nation to Mary’s protection on Friday, May 1, at a shrine in northern Italy.”

In the Toronto Sun, Brian Lilley blasted Health Canada’s recent decision “not to approve a cheap and rapid test for COVID-19, one made right here in Canada, because of what the WHO [World Health Organization] says.”

“Let me get this straight: We have a company that can provide accurate results using a blood test and we won’t use it because an international body in Geneva says no?” Lilley asked.

Stanford University has released a report on coronavirus antibody testing that apparently shows “the virus’s spread could be far wider than previously believed” – meaning its death rate is far lower than what has been reported and that many coronavirus-positive people have had mild or no symptoms.

Reason reported April 17 that a teenager who posted on Instagram about having the coronavirus was along with her family threatened with arrest. She and her family are now suing the local sheriff’s department.

“Patrol Sergeant Cameron Klump from Marquette County Sheriff's Department showed up on the family’s doorstep,” Reason explained. “He was there under orders from Sheriff Joseph Konrath to demand that Amyiah [the 16-year-old] and her father, Richard Cohoon, remove Amyiah’s Instagram posts. If they refused, Klump said the family faced charges for disorderly conduct and Klump told them he would ‘start taking people to jail,’ according to the suit.”

A Canadian 17-year-old was ticketed for shooting basketball hoops by himself last week.

“It is ‘unconscionable’ that Riker’s Island inmates who were released due to coronavirus concerns are committing new crimes, [New York] Mayor Bill de Blasio said Monday,” the New York Post reported. “De Blasio said the number of re-offenders remains relatively small and said the city was ‘buckling down’ on monitoring and supervising released prisoners.”

In Florida, a man is accused of committing murder the day after he was prematurely released from prison because of the coronavirus.

In New Jersey, the government has shut down a drive-through tulip farm. Its owners are still allowed to sell their tulips for “curbside pickup,” though.