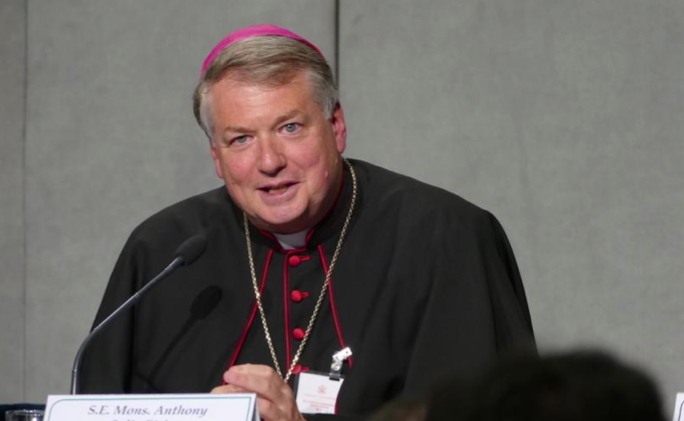 October 5, 2018 (LifeSiteNews) – Avera Maria Santo, a 22-year-old woman who experiences same-sex attractions, wrote a powerful open letter to the bishops of the Catholic Church about the topic of homosexuality, which is being discussed at the Youth Synod currently underway in Rome. LifeSiteNews has learned that the letter is circulating among the Synod Fathers.

“As someone who has not only grown up in the Church, but has also come to love her and her teachings for myself, I would hate to see her teachings altered in any way, especially in a way that could cause such a grave amount of damage,” she writes.

Santo, a member of the Catholic group Courage, says she was “devastated” when she learned of the agenda of some to try to change the Church’s teaching on the matter at the Synod. Pleading with the bishops, she writes, “keep the Church's teachings on homosexuality good, true, and beautiful.”

She admits that at first she didn’t like what she heard when she learned the Church’s teaching, but it was what she “needed to hear.” Being in a same sex relationship, she notes, “could ultimately block me from spending my eternity with my one true love, Jesus.”

Santo, who blogs at Inside my holy of holies, rebuked those who act as though chastity for homosexual persons is impossible. “Telling me that my cross of same-sex attraction is too heavy for me to love as Christ calls me to, is not just degrading, it is also a lie,” she said.

When I was made aware of the efforts being made by pro-LGBT groups trying to persuade Catholic Bishops to change Church teaching on homosexuality, specifically at this year's Youth Synod, it devastated me.

As someone who has not only grown up in the Church, but has also come to love her and her teachings for myself, I would hate to see her teachings altered in any way, especially in a way that could cause such a grave amount of damage.

I wish then to lay my heart bare, and to share some of my story and my convictions with you, dear Bishops of the Holy Catholic Church, and plead with you to keep the Church's teachings on homosexuality good, true, and beautiful.

I am a 22-year-old young Catholic woman that experiences same-sex attractions. While I was growing up, I heard very little, if anything at all, on homosexuality, even though I attended Catholic school from Pre-K – 12th grade.

When I finally came to terms with the fact that I was romantically interested in other women, it terrified me. I didn't know where turn, who to speak to, or if I could speak about it at all! The fear paralyzed me into silence for quite a while.

As time went on, I began to learn more and more about the teachings of the Catholic Church on homosexuality, and for some time, I didn't understand them. I wasn't sure what the words “objectively” and “intrinsically disordered” meant, and truth be told, I had the feeling that I didn't want to know. It wasn't until I was around the age of 20 that I finally began to understand.

I'll admit, I didn't like what I heard, but I knew it was what I needed to hear.

Recently, I came across a quote from Abbot Jean-Charles Nault, O.S.B. that spoke a great deal of truth to me. It read:

“For the philosophers of Antiquity, and for the whole Christian tradition, freedom is the ability that man has–an ability belonging jointly to his intellect and will–to perform virtuous actions, good actions, excellent actions, when he wants and as he wants. Man's freedom is therefore his capacity to accomplish good acts easily, joyously, and lastingly. This freedom is defined by the attraction of the good.”

Time and time again, we will hear phrases such as “I just want the freedom to love whomever I want,” from those within the LGBTQ community. This desire is an inherently good one, when it is rightly ordered.

Man is only truly free when he can choose to do as he ought, not simply as he wants, for the things that we may want aren't always good for us.

I [used] to want to be in a same-sex relationship. The desire was overwhelming at times, to the point where I could see no other way to get through the day. But I know now, from the good and gracious teachings of God through His Church, that such a relationship hinders not only my freedom to love authentically, but also my ability to achieve holiness.

Taking it a step further, being in such a relationship could ultimately block me from spending my eternity with my one true love, Jesus.

My dear Bishops, there is no one on this earth that isn't called to a life of chastity, that includes my brothers and sisters who experience same-sex attractions. This is not because the Church is oppressive and wants us to be miserable and passively submissive to her, but because each and every one of us is invited to enter into the Divine Life of our Creator, a life where no sin can remain.

The Catechism states in paragraph 2331 that “God is love and in himself he lives a mystery of personal loving communion. Creating the human race in his own image… God inscribed in the humanity of man and woman the vocation, and thus the capacity and responsibility, of love and communion.”

Not only should I be reminded that, as a Christian, I am called to love as Christ loved us, but I also have the capacity to do so. I am capable of authentic love!

Telling me that my cross of same-sex attraction is too heavy for me to love as Christ calls me to, is not just degrading, it is also a lie. God did not abandon me when man first sinned in the beginning, and He will not abandon me now.

He has called me, and each and every one of us to Himself, and I intend to return back to Him, no matter how burdensome my cross may be.

Like Christ remembered me from the cross, I pray that you would remember me, and my brothers and sisters like me, dear Bishops, as you pray about and discuss how to help young people in matters of faith and vocation, especially in regards to the topic of homosexuality.

Please remember that, as St. Therese the Little Flower, a dear patron of mine, so greatly put it, “My vocation is to love.”

‘LGBT’ should not be in Vatican documents: Archbishop Chaput tells Youth Synod

Over 100 youth to Synod-bound archbishop: We love Catholic doctrine