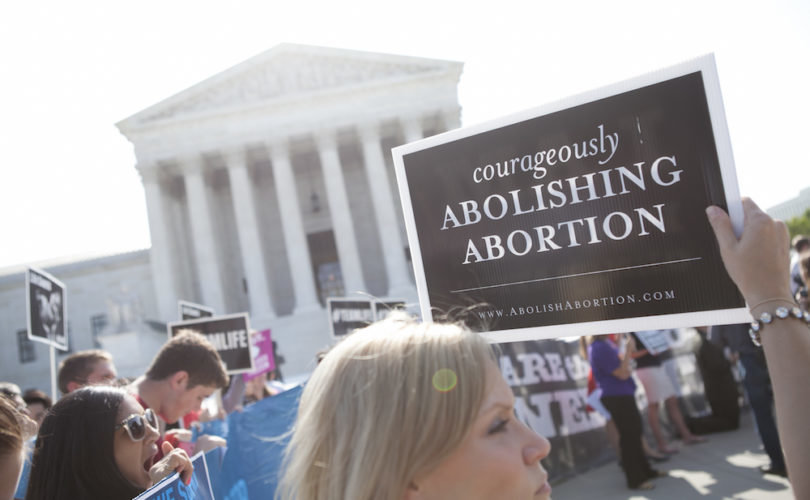 WASHINGTON, July 29, 2021 (LifeSiteNews) — More than 200 Republican members of Congress have signed yet another amicus brief calling on the U.S. Supreme Court to return greater discretion on abortion policy to the elected branches of government in its upcoming review of Mississippi’s fifteen-week abortion ban.

The attorneys general of Mississippi and Missouri have asked the Court to directly overturn Roe v. Wade and Planned Parenthood v. Casey, as have Sens. Ted Cruz, Josh Hawley, and Mike Lee in their own brief, as well as eleven Republican governors including Ron DeSantis of Florida.

The Hill reports that the latest brief, filed Thursday, is signed by 44 Republican senators and 184 House members, though it does not go as far as the aforementioned arguments.

“Mississippi’s case provides the Court a chance to release its vise grip on abortion politics, as Congress and the States have shown that they are ready and able to address the issue in ways that reflect Americans’ varying viewpoints and are grounded in the science of fetal development and maternal health,” the lawmakers argue.

“Courts and legal scholars have repeatedly described Casey’s viability line as “arbitrary” and ‘artificial,’” they continue. “Three decades after Casey, this Court has failed to disambiguate key terms employed in Roe such as ‘viability’ and ‘prohibition,’ and has failed to provide meaningful guidance on the impact of the viability line on lower courts’ consideration of recognized state interests.”

Notably, however, the brief expressly identifies as acceptable outcomes rulings that allow greater restrictions on pre-viability abortions but fall short of fully returning abortion to the democratic process.

“The Members of Congress urge the Court to … uphold Mississippi’s law, or return the case to the lower courts for consideration on a full evidentiary record of the crucial interests the State relied upon in determining to regulate the availability of late-term abortion,” the brief declares. It goes on to say that if the Court “construes Roe and Casey as prohibiting the assertion of vital state interests” such as banning late-term abortions, banning certain abortion techniques, or banning abortions motivated by fetal anomalies, then “these precedents should be reconsidered and, where necessary, wholly or partially overruled.”

The milder appeal may explain why Cruz, Hawley, and Lee, who did not sign this latest brief, chose to file their own instead.

Various other pro-life scholars and activists have filed amicus briefs making the case for fully overturning Roe and Casey, as well:

Another outstanding brief. From Mary Ann Glendon and Carter Snead. “This case offers the cleanest opportunity since Roe v. Wade was decided in 1973 for the Court to revisit its deeply flawed and harmful jurisprudence.”https://t.co/rQkkrt2uHA @cartersnead @NDLaw @ND_EthicsCenter pic.twitter.com/U8wXRnaAXy

��Just filed an amicus curiae brief with @CtrMedProgress today at SCOTUS in the Dobbs case.