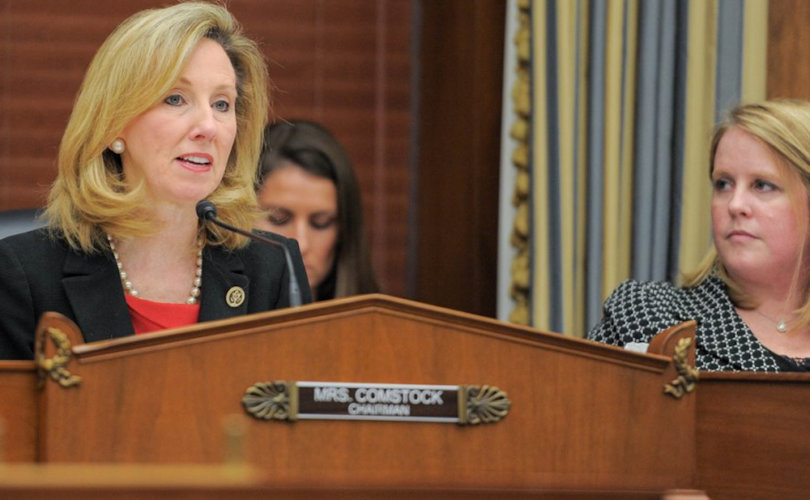 U.S. Rep. Barbara Comstock of Virginia was one of 24 House Republicans who voted against an amendment to stop funding for sex-reassignment surgeries in the military.Flickr

July 14, 2017 (LifeSiteNews) — Social conservatives woke up this morning to learn that a few Republicans Congressmen they have admired for years joined with Democrats yesterday to ensure that American taxpayers will continue to foot the bill for transsexual “sex reassignment surgeries” in the military.

An amendment to the 2018 defense spending bill sponsored by Rep. Vicky Hartzler, R-Missouri, would have stopped DoD funding of the “sex change” operations for the severely gender-confused as the Pentagon considers whether to continue Obama’s policy allowing “transgender” military service. It went down to narrow defeat, 214-209, as 24 Republicans (listed below) joined 190 Democrats in rejecting it.

If just three Republicans had joined the overwhelming majority (209 members) of their Party — and honored the GOP’s pro-family platform, which opposes politically correct sex-and-gender experimentation in the military — the vote would have gone the other way.

Defense Secretary James Mattis has delayed implementation of the DoD “transgender” policy for six months pending a review. The policy, which was imposed by Obama Defense Secretary Ash Carter in 2O16 without congressional action, was slated to take full effect July 1. Mattis reportedly rejected a request by the Army and Navy (which oversees the Marines) to delay the policy for two years, to the dismay of social conservatives.

Ten House members abstained from the Hartzler amendment vote, including Louisiana Republican Steve Scalise, who is in the hospital after being shot June 14 while practicing for a congressional softball game in an attempted assassination of Republicans by a Democratic Bernie Sanders supporter.

The following 23 GOP Congressmen voted with the LGBT Lobby against the Harztler amendment to the 2018 NDAA (National Defense Authorization Act):

Some of the names on the list are surprising to seasoned Republicans. Rep. Comstock was once the darling of social conservatives, but her northern Virginia district is trending liberal, pulling her to the Left. Darrel Issa is a nationally respected, pro-life conservative with a lifetime American Conservative Union (ACU) congressional scorecard rating of 87.49 percent.

What exactly are we taxpayers paying for?

Also among the 24 pro-tax-funded-transsexual-surgery voting Republicans is Rep. Amash, a respected libertarian-minded legislator with a large national following. Few would have expected that Amash would countenance spending taxpayer dollars on elective “gender reassignment surgeries” that are so extreme that they draw shudders when described to laymen.

The website of the Philadelphia Center for Transgender Surgery, gives, for those who can stomach reading it, a detailed description of how surgeons perform “male-to-female” “vaginoplasty” surgery on men who want to live as “women.” Essentially, the goal is to convert a penis into a makeshift “vagina.”

In a statement issued before the vote on her NDAA amendment yesterday, Rep. Hartzler said the legislation “simply makes sure our defense resources are allocated in a way that is smart and good for our national defense. This current policy of providing and paying for transgender surgeries hurts readiness and is projected to cost over a billion dollars over the next 10 years.”

“The job of Congress is to ensure that our military is the most effective, efficient and well-funded fighting force in the world. With the challenges we are facing across the globe, we are asking the American people to invest their hard-earned money in national defense. Each dollar needs to be spent to address threats facing us,” she said. “My amendment ends the 2016 Obama administration practice of the military paying for very expensive gender change surgeries that even most private insurance plans don’t cover. This amendment does not prevent anyone from joining the military or receiving standard medical care.”

Conservatives denounced the rejection of Hartzler’s amendment. California Rep. Duncan Hunter said opposition to the measure was “silly” because people should “figure out if you’re a man or a woman before you join up” for the military, BizPac Review reported.

Liberals and Democrats, on the other hand, assailed the amendment in the strongest of terms. In a statement, House Minority Leader Nancy Pelosi, representing San Francisco, called the Hartzler amendment “disgusting” and “appalling”—ironically, the same adjectives many people apply to describe such transsexual operations as the penis-mutilating “vaginoplasty” (above), or the “female-to-male” operation in which a woman has her healthy breasts surgically removed to have a flat chest like a man.

“Republicans should be ashamed: instead of protecting the men and women who risk their lives to defend our freedoms, they are fighting to rip away the healthcare of thousands of brave service members,” Pelosi said. “This cowardly Republican amendment targeting transgender men and women in uniform effectively bans these patriotic Americans from serving their country. This disgusting amendment is unprecedented, unacceptable and undermines our national security.”

Sarah McBride, spokesperson for the LGBT lobby group Human Rights Campaign, celebrated the “transgender” activist victory, saying, “If only three Members of Congress had voted yes instead [i.e., FOR the measure denying taxpayer funding to the Pentagon for transsexual “sex reassignment surgeries”], this dangerous and discriminatory anti-transgender amendment would have passed.”

But Walt Heyer, a former transsexual who actually went through the body-disfiguring “male-to-female” surgery to remove his penis — but now strongly pleads with gender-confused men not to do the same — said the whole idea of recruiting “transgenders” into the Armed Forces is “total nonsense.”

“They’re unfit for military service,” said Heyer, who once suffered with the delusion of having an alternate female persona in his head named “Laura.” Regarding transsexuals and people who want to “change sexes” (which he stresses is impossible), he said, “They’re neither psychologically fit nor emotionally sound enough to be a part of the most battle-ready military in the world.”

Heyer, founder of SexChangeRegret.com, told LifeSiteNews that even after going through transsexual “sex reassignment” surgeries and hormonal treatments in a futile quest to become the opposite sex, many men and women “still find themselves depressed and suffering from great anxiety, to the point of considering suicide.”

“In no way should they be part of the military — period. I don’t care what anyone says,” said Heyer, who has written several books and more than 30 articles about the many problems and pathologies associated with “transgender” individuals.

“Why subject the military to this group of people, which will do nothing but sap the morale of our fighting men and women?” he said.

Laurie Higgins, who writes frequently for the Illinois Family Institute about gender-confusion issues, told LifeSiteNews, “This vote exposes the indefensible lack of moral reasoning and political courage that pollutes the Republican Party. Humans have an objective sex that is both immutable and profoundly meaningful.”

Higgins said one's objective sex — as opposed to subjective “gender” — is the source of feelings of modesty and what motivates the “desire for and right to physical privacy.”

“The fact that we have any lawmakers who support the use of taxpayer funds to pay for snake-oil treatments in the service of delusional beliefs should be troubling,” Higgins said. “The fact that we have 24 Republicans who, in effect, voted for the use of scarce public resources from financially struggling Americans to fund destructive “treatments” that enable men and women to impersonate the opposite sex and invade the privacy of opposite sex persons should be shocking.”

She said, “These Republicans either support in principle the use of funds for such nonsense or they're too spineless to take a public stand for reality, truth, fiscal responsibility, and military readiness. Either way, they should be given the heave-ho.”

Update: We have removed Rep. Brian Mast from the list after learning that he originally miscast his vote.