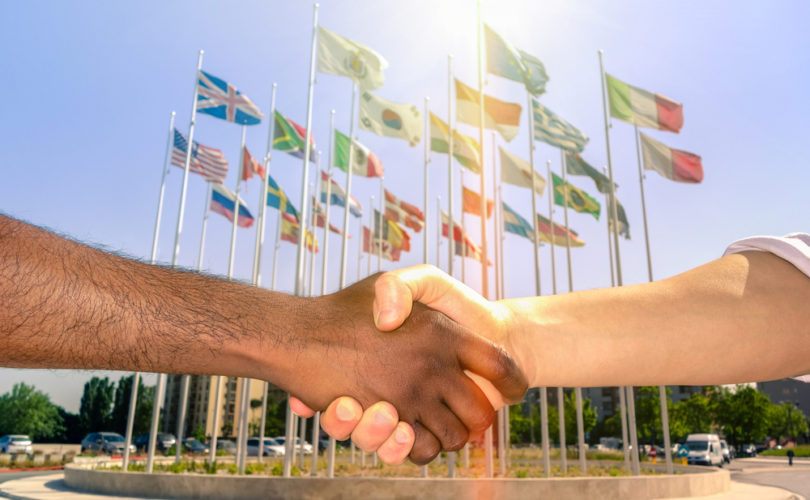 March 31, 2021 (LifeSiteNews) –– A host of global leaders issued a call for a global pandemic treaty, purportedly in order to prevent future pandemics, distribute vaccinations, and implement a unilateral approach to global governance.

U.K. Prime Minister Boris Johnson, French President Emmanuel Macron, German Chancellor Angela Merkel, the head of the World Health Organisation (WHO), as well as 20 other world leaders, joined forces in penning a joint letter with the apparent intent of winning popular support for the globalist plan.

Writing in U.K. paper The Telegraph, as well as other publications such as Le Monde in France, the leaders declared their intent to “build a more robust international health architecture that will protect future generations.”

Calling COVID-19 the “biggest challenge to the global community since the 1940s,” the 24 leaders predicted that there “will be other pandemics and other major health emergencies.”

“No single government or multilateral agency can address this threat alone,” they declared. “The question is not if, but when. Together, we must be better prepared to predict, prevent, detect, assess and effectively respond to pandemics in a highly co-ordinated fashion. The Covid-19 pandemic has been a stark and painful reminder that nobody is safe until everyone is safe.”

This final phrase could indicate the influence which World Economic Forum (WEF) founder and committed globalist Klaus Schwab enjoys over the 24 leaders. Just weeks ago, Schwab declared, “As long as not everybody is vaccinated, nobody will be safe,” a statement which in itself poses an interesting question about the trust which such leaders are placing in their much praised, but dangerous, experimental injections.

The leaders re-affirmed their joint aim of global vaccination, describing it as “global public good.”

In order to achieve that “public good,” and to ensure swift roll-out of vaccines across the globe, the 24 globalists initiated their new international treaty: “[W]e believe that nations should work together towards a new international treaty for pandemic preparedness and response. Such a renewed collective commitment would be a milestone in stepping up pandemic preparedness at the highest political level.”

This treaty would be based on the principles of the WHO, drawing from the WHO’s constitution, as well as calling on “other relevant organisations key to this endeavour.” The WHO’s director-general, Dr. Tedros Adhanom Ghebreyesus, was one of the signatories of the statement.

“The main goal of this treaty would be to foster an all of government and all of society approach, strengthening national, regional and global capacities and resilience to future pandemics,” the leaders declared.

Nor would it be centered purely on globalist vaccination agendas. Due to the leaders’ “One Health” approach, it would build on the principle of a connection between “the health of humans, animals and our planet.”

In language reminiscent of the Great Reset agenda, promoted by the WEF and Klaus Schwab, the leaders mentioned that the new treaty would lead to a lack of national interests, and increased international concerns: “[S]uch a treaty should lead to more mutual accountability and shared responsibility, transparency and co-operation within the international system and with its rules and norms.”

No section of society would be exempt from becoming involved in the new treaty, whatever it may turn out to look like, with the world leaders pointing out that “we will work with heads of state and governments globally, and all stakeholders including civil society and the private sector.”

Declaring that the coronavirus, which originated in Wuhan, China, had “exploited our weaknesses and divisions,” the leaders pronounced it to be their “responsibility” to “ensure that the world learns the lessons of the Covid-19 pandemic,” and to “seize this opportunity and come together as a global community for peaceful co-operation that extends beyond this crisis.”

The proposal is due to be further discussed among national leaders at the June G7 summit in Cornwall in the U.K., where Boris Johnson will join his counterparts from Canada, France, Germany, Italy, Japan, the U.S., and the E.U. Meanwhile, the 24 signatories warned that their new plan “will take time and require a sustained political, financial and societal commitment over many years.”

Speaking to BBC Radio, the WHO’s special COVID envoy Dr. David Nabarro, echoed the language employed by the 24 leaders, noting that it would be 2022 before the globalist agenda of world vaccination was complete, and thus hinted at “all sorts of problems with variants,” before that goal was complete.

“All that leaders are saying is ‘this problem is so huge we’ve got to work together to deal with it’,” Nabarro added.

The planned treaty appears to align very closely with the Great Reset goals of Klaus Schwab. The World Economic Forum’s promotion of the Reset even employs matching terminology, describing “leaders” who “find themselves at a historic crossroads.”

The societal disruption caused by the Wuhan virus presents “a unique window of opportunity to shape the recovery” for Schwab, who added that “this initiative will offer insights to help inform all those determining the future state of global relations, the direction of national economies, the priorities of societies, the nature of business models and the management of a global commons.”

Indeed, the link between the new international treaty and the Great Reset caused veteran presenter Richie Allen to write, “This is terrifying. For many years, I have been featuring writers, researchers and academics who warned us that this would happen. This is the end game.”

Such a treaty was simply about “concentrating power in the hands of a tiny elite,” explained Allen. “It’s what globalists have been working towards for decades.”

Climate change is the perfect tool to justify complete control