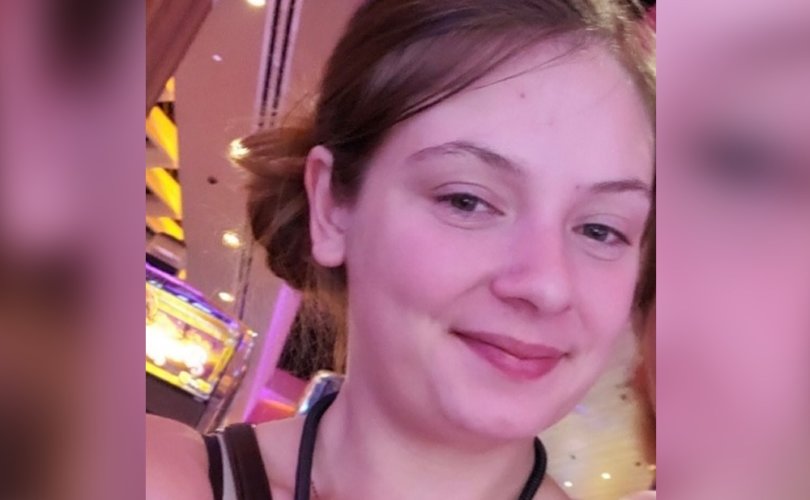 INDIANAPOLIS, Indiana, July 16, 2020 (LifeSiteNews) ― A young mother was shot from behind after saying “all lives matter,” according to her family and fiancé.

Jessica Doty-Whitaker, 24, died in an Indiana hospital earlier this month after being shot by an unseen assailant.

Doty-Whitaker, the mother of a three-year-old boy, was walking along the Indianapolis Canal Walk with her fiancé José Ramirez and another couple around 3:00 a.m. on July 5 after celebrating the Fourth of July.

According to Ramirez, they encountered a group of four men and one woman and got into a heated argument about language and the Black Lives Matter movement. It apparently began when a member of Ramirez’s group allegedly used the slang word “n***” in a non-disparaging way in conversation and the strangers, overhearing, took offense.

One of the strangers said “black lives matter,” and Doty-Whitaker, who was the only white member of her party, replied, “All lives matter.”

During the argument, at least one of the strangers took out a gun, and Ramirez displayed his own firearm. However, he told Fox 59, the groups talked through the issues and parted peacefully.

“It was squashed and they went up the hill and left, we thought, but they were sitting on [West] St. Clair [Street] waiting for us to come under the bridge and that's when she got shot,” Ramirez said.

Yesterday Indianapolis Police published CCTV images of people they believe may have been involved or witnesses to the shooting.

Ramirez reported that he returned fire but that he didn’t see anyone or know if he hit anyone. Doty-Whitaker died shortly afterward in hospital. Her funeral was held on July 10.

Her sister Jennifer told Fairbanks that Doty-Whitaker was a home healthcare nurse who planned to return to school to become a registered nurse. Jennifer also said that the hardest part of her sister’s death was her son Greyson’s reaction.

“It’s heart wrenching to watch my mother explain to my three-year-old nephew that mommy is an angel in heaven and him ask when we can go get her and bring her back,” she said.

The bereaved sister declared that Jessica was “not racist in any way.”

“People are going to say what they want to justify this [killing], but it’s not justified,” she said.

“She was not racist in any way. That is not how we were raised.”

“My sister Jessica Lynn Doty Whitaker was murdered at the canal on July 5 2020 for saying All Lives Matter. Indianapolis City council is voting to have BLM painted on our streets yet her killer still remains at large. This is [outrageous] to us,” she wrote.

A GoFundMe account has been opened to raise money to pay for Doty-Whitaker’s funeral and for the financial support of her son. At this time of writing, it has raised $80,871. Ramirez thanked donors on Monday and said that reporting the slain mother’s death was “not politics.”

“Although there has been much disinformation spread online, one thing remains of central importance: Violence was used against a peaceful woman who was unarmed and shot in the back by cowards who chose to undermine whatever pretext they claimed in the act,” he wrote.

“This is not politics; it is a matter of life and death. No money can heal the wounds of this senseless act, but from this [GoFundMe account], we aim to show her son that love and kindness are not forgotten notions.”

Black Lives Matter is a Marxist organization that has encouraged widespread civil disturbance across the United States since the death of Minneapolis bouncer George Floyd in police custody. It has also inspired protests in Canada, Britain, and Western Europe.

LifeSiteNews has reached out to Jennifer Whitaker but has not yet received a response.