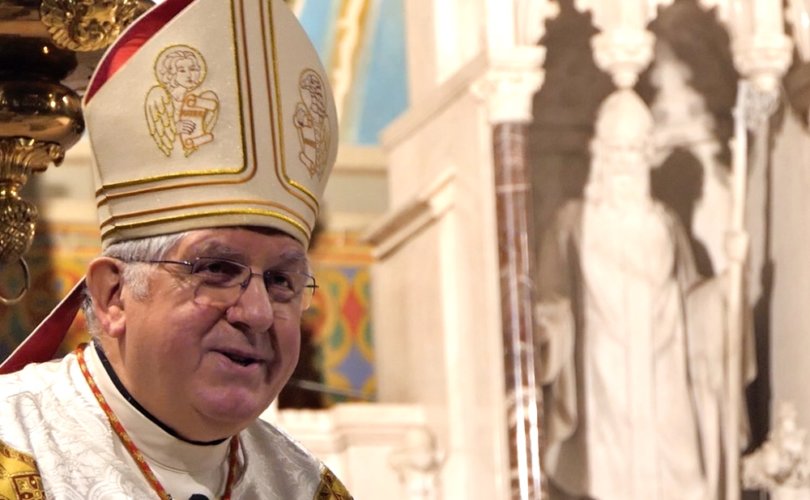 Thomas Cardinal Collins gives a homily at St. Patrick's Basilica in Ottawa prior to the National March for Life, May 9, 2019.Pete Baklinski / LifeSiteNews

CLC’s petition was signed by 1,915 and delivered to the diocesan office in Toronto by CLC Campaign Manager David Cooke and CLC Youth Coordinator Josie Luetke.

The petition has since reached 2,415 signatures as of this writing and remains open for signing.

Last week, at the Toronto Catholic District School Board – one of the largest boards in Canada with over 90,000 students – a motion was brought forward to add the terms “gender identity” and “gender expression” to the official Code of Conduct.

This motion, if adopted, will have the effect of entrenching gender ideology and transgenderism in every single Catholic elementary and secondary school across Toronto.

It would permit and promote:

CLC also expects this decision to produce a ripple effect across the country in other Catholic school boards. Moreover, it would be yet another blow to the broader Christian community.

This poses a serious threat to Catholic values and beliefs and is a grave danger to children.

The LGBT lobby, together with their mainstream media and leftist political allies, are pushing hard and fast to secure the dominance of Gender Theory in every area of society. They understand better than most that this one ideology has enormous power to displace traditional values and uproot the Christian foundations of Western civilization.

Instead of recognizing that man and woman are created in God’s image (and thus accountable to Him), Gender Ideology asserts that man can create himself in his own image. It's left to individuals to choose their own “gender identity” and “gender expression”, and tell the Creator to simply shove off.

Thankfully, in an initial vote on October 30th, four out of five Catholic trustees chose to reject the motion. Only one person, pro-LGBT trustee Maria Rizzo, voted to oppose traditional Catholic teaching in favour of transgenderism for kids.

There will be at least one more vote on the gender ideology motion. When that happens, the entire board of trustees will vote, and a final decision could be made.

Unfortunately, there is enormous pressure being placed on trustees by the pro-LGBT lobby, the media, and the political Left. The Toronto Star and CBC are already on the attack. Trustees must be encouraged to do the right thing and stand up to this secular and “demonic” pressure.

Cardinal Collins has the authority and power to direct trustees to vote according to orthodox Catholic teaching.

He also has the moral and spiritual influence to guide the terms of discussion and impact the thinking of the entire Catholic community.

A word from him could make all the difference.