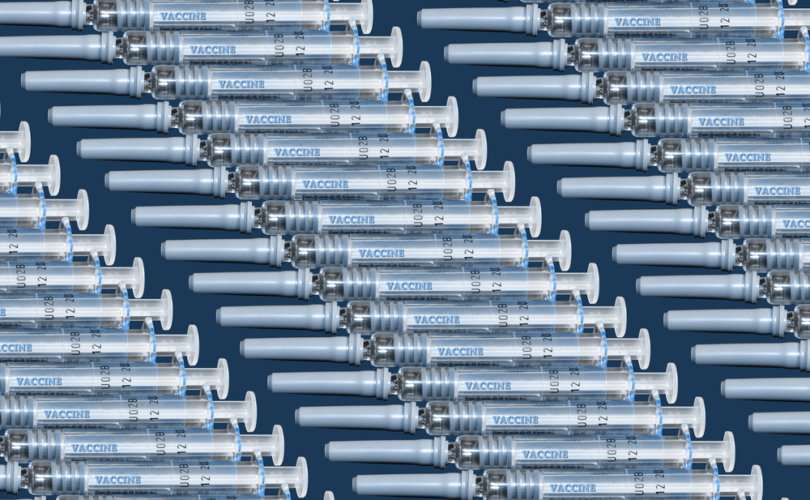 SYDNEY, Australia (LifeSiteNews) — A plan to jab 24,000 Australian teenagers at a mass vaccination site raised eyebrows after New South Wales Health Minister Brad Hazzard advised parents to “stay outside the arena” while their children were “ushered” inside by police officers and nurses.

In a video that was clipped and posted to social media, Hazzard told parents of teens invited to get their first jab at Qudos Bank Arena to stay outside while their children were given the experimental shot, which has been linked to serious possible side effects for young people, including myocarditis.

AUSTRALIA- 24,000 children will be vaccinated in a stadium next week. No parents will be allowed access.

In an August 6 public announcement of the plan, Hazzard likened the opportunity to get the jab at the Super Dome in the NSW capital city to Olympic athletes “going for gold.”

The health minister said the young people must enter the stadium alone, ostensibly to avoid crowding.

“If mum, or dad, or one of your family drop you, make sure they stay outside the arena,” Hazzard said, “because we don’t want too many people, obviously, milling around inside the arena.”

After directing the minors to enter the stadium without parental accompaniment, Hazzard assured parents that the teens would be “literally ushered” into the stadium by nurses and law enforcement officers, including police officers affiliated with the “Youth Command,” a service composed of 120 law enforcement officers dedicated to the “reduction and prevention of youth crime and anti-social behaviour.”

Once “ushered” in by police and nurses, the teenagers would be “looked after every moment,” Hazzard said.

According to the Guardian, Qudos Bank Arena, formerly known as the Sydney Super Dome and utilized for the 2000 Summer Olympics, had been transformed into a mass vaccination site earlier this month, with plans to offer the Pfizer jab to 24,000 young people living in eight “local government areas of concern” considered to be COVID-19 hotspots.

The young people targeted in the scheme were “year-12” students (the equivalent of high school seniors in the United States) who were prioritized for getting their first shot in order to attend school and take their HSC (Higher School Certificate) exams this fall.

The New South Wales Health Department opened the stadium to broader demographics after the youth vaccination effort was completed.

Despite Hazzard’s apparent concerns about overcrowding by family members during the vaccination effort for the teens, the site hosted “plenty of staff including police and security,” one parent told the Guardian.

During the announcement of the scheme, the health minister failed to talk about the potential side effects of the vaccine for young people, who are at statistically low risk of serious complication or death from COVID-19.

In June, Pfizer added a warning of myocarditis and pericarditis to the fact sheet for its COVID-19 shot.

The U.S. Centers for Disease Control and Prevention is currently investigating the case of a 13-year-old Michigan boy with no known pre-existing health conditions who died in his sleep after getting his second Pfizer jab.

In May, 18 Connecticut teens were reported to have developed heart inflammation after getting the jab, resulting in their hospitalization.

Data released August 6 by the Vaccine Adverse Event Reporting System (VAERS), which is the U.S. government’s primary government-funded system for reporting adverse vaccine reactions, indicates that between Dec. 14, 2020 and August 6, 2021, a total of 571,831 total adverse events were reported to VAERS, including 12,871 deaths and 51,807 hospitalizations.

Just last week, the NSW Health Department issued warnings and isolation advice to Australians who got their COVID-19 shot at the site, after a single person who visited the center tested positive for the virus.

“A person who attended Qudos Bank Arena Vaccination Hub in Homebush on 10 Aug 2021 between 2.40pm and 4.20pm has tested positive for COVID-19,” a text message sent out by the health department read.

Those who got their shots at the stadium were offered a COVID-19 PCR screening test after they got the shot, according to a message written by Graeme Loy, chief executive of Western Sydney’s local health district, to parents of teens who got the jab.

“Students will not have to self-isolate after having this test,” Loy wrote at the time. “In the event the student does not wish to have a COVID test, the student will need to inform a NSW Health Pathology staff member.”

Nonetheless, the NSW Health Department advised Australians in its text message on August 10 that “[a]ll people there at the same time are advised to get tested for COVID-19 as soon as possible and self-isolate until you receive a negative result. You must get another COVID-19 test on 15 August 2021. Wear a mask around others and limit your movements until you get your second negative result. Monitor for COVID-19 symptoms and get tested again at any time if you develop any symptoms.”

Australia has made headlines for its uniquely strict COVID-19 protocols since last year, with harsh curfews, bans on travel except for “essential” shopping, and severe treatment of anti-lockdown protesters by Australian law enforcement.

Last month, NSW’s chief health officer told Australians that to prevent the spread of COVID-19 they should avoid talking to their neighbor even in passing.

More than 500 Australian military personnel have been sent out domestically to ensure compliance with the dictates of Australian health department officials.

Media outlets reported last week that an additional 200 unarmed soldiers would be sent out to patrol Sydney’s streets to make sure Australians are abiding by the harsh lockdowns once more imposed upon residents of New South Wales’ capital city.

Sydney has been under lockdown for roughly two months to date, with the duration of the lockdowns recently extended through September.

New South Wales state premier Gladys Berejiklian expressed frustration that Australians weren’t more compliant with the lockdown orders, telling reporters she was “a bit tired of hearing people say they don’t know what they are supposed to do.”

As reported by CNN, Berejiklian said the effort to contain the spread of the virus “is literally a war” and her state was “throwing everything at it” as she announced a snap seven-day lockdown across the entire state of New South Wales beginning August 14.

According to CNN, “Stay-at-home orders will be applied across the country’s most populous state, with people only permitted to leave home to shop for essentials, receive medical care, outdoor exercise with one other person, and work if residents cannot work from home. Schooling will also be moved back online.”