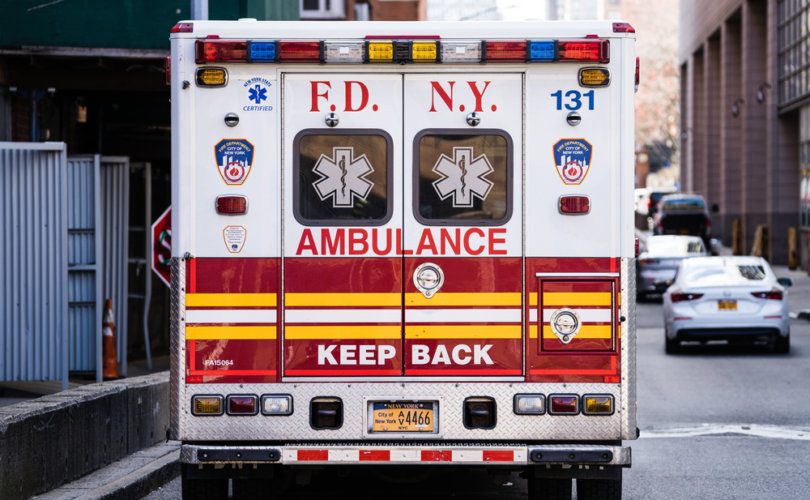 NEW YORK (LifeSiteNews) — The Fire Department of the City of New York (FDNY) was forced to “temporarily” close 26 fire stations Saturday after the city’s vaccine mandate caused a massive staffing shortage in the department.

As Democrat Mayor Bill de Blasio had required all New York City workers to provide proof that they received at least one dose of the experimental COVID-19 injections by Friday, the FDNY anticipated that 28 percent of firefighters would be suspended without pay by Monday.

According to the New York Post, all five boroughs in America’s most populous city (Manhattan, Brooklyn, the Bronx, Queens, and Staten Island) are currently impacted by the closures.

Local politicians and residents alike fielded their concern over the news that the mandate has led to such a massive crisis for the important emergency service.

“If someone dies due to a slower emergency response, it’s on [Mayor] Bill de Blasio and his overreaching mandates. I hope this fool fixes it ASAP!” tweeted Staten Island Republican Rep. Nicole Malliotakis, who had five stations closed in her district alone.

“Most of the houses here are semi-attached frame houses. You throw a match on it, and it goes up real quick,” a man who neighbors the now “out of service” Engine Co. 284 in Brooklyn told the Post. “You need a quick response … it’s scary.”

Despite the pleas for aid, FDNY spokesman Jim Long said the closures are not permanent, and the fire companies are merely “temporarily out of service.”

“The situation remains fluid,” said Long. “We hire manpower to get the company back in service or relocate other units to the area for coverage.”

Instead of blaming the mandate, which forces firefighters and other emergency responders such as police officers and paramedics to receive the experimental jab or be suspended without pay, Fire Commissioner Daniel A. Nigro slammed the firefighters for refusing to comply with the mandate, and for calling in sick as a way to protest the mandate and extend their time with pay.

“Irresponsible bogus sick leave by some of our members is creating a danger for New Yorkers and their fellow Firefighters,” Nigro said. “They need to return to work or risk the consequences of their actions.”

Last week fire officials warned that as many as 20 percent of the FDNY companies could be closed once the mandate took effect. As of right now, 26 closures represent a closure rate of just under 8 percent, leaving the possibility open that the situation could devolve further.

Councilman Joe Borelli, a Staten Island Republican who chairs the council’s committee on fire and emergency management, warned that even with just a 7.6 percent closure rate, the situation is “unconscionable.”

“The firefighters who are unable to work have all been tested within the week and are not COVID positive,” Borelli informed the public. “And I doubt New Yorkers care about the vaccine status of the person applying defibrillators to their chest.”

According to City Hall, 26,600 workers in the city still remain unvaccinated. About 4,000 of those employees are with the FDNY.

Despite the large number of unjabbed city workers, including 16 percent of those employed by the New York Police Department (NYPD), 23 percent of all FDNY employees, and 28 percent of FDNY firefighters, de Blasio doubled down on his mandate last Thursday, saying he would not extend the deadline.

“No, there’s no discussion of changing the deadline,” de Blasio said. “The bottom line is, can we do the things we need to do first of all to keep this city safe for the long run? Well, that means get people vaccinated. Yes, we can do that, yes, we have a plan to do that.”

The COVID-19 vaccines, which are experimental and do not complete clinical trials until 2023, are potentially linked to 17,619 deaths, according to the Vaccine Adverse Event Reporting System (VAERS) database, and millions of injuries worldwide.

“When they say they’re safe, you must know they don’t know that. They’ve not been around long enough for them to possibly evaluate,” said Yeadon at a LifeSiteNews conference in August. “Worse, these [vaccine side effects] are deliberate acts which I believe whoever is doing it is lying about it to hide it and they’re smearing people who are trying to warn you. Who do you trust?”