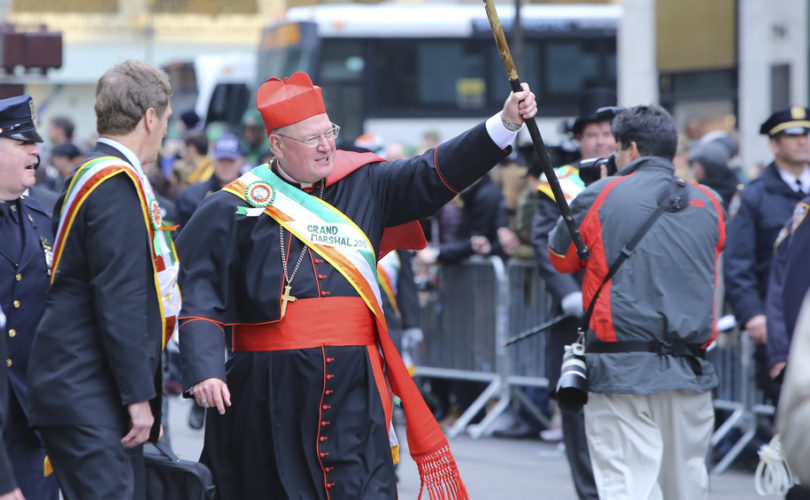 October 9, 2015 (LifeSiteNews) – The New York City Saint Patrick’s Day Parade has announced that it is allowing a second pro-homosexual group to participate in the event. Meanwhile, a commitment from parade organizers to allow a pro-life group in the parade remains unfulfilled.

LGBT group Lavender and Green Alliance will march in the 2016 St. Patrick’s Parade, joining [email protected], the result of a September 28 vote by the parade board of directors, according to the Wall Street Journal.

Lavender and Green Alliance’s tag line states that it has been, “celebrating Irish Lesbian, Gay, bisexual and Transgender culture and identity since 1994.”

Homosexual groups lauded the parade’s decision as a triumph.

“We Won!” declared the headline of a press release from Irish Queers the day after the second group was approved. A spokesperson for the group called the decision “a total victory.”

The president of the pro-life group whose parade application has been rejected had a different reaction.

“It is now a gay parade and no longer a Catholic parade,” said Elizabeth Rex, of Children First Foundation (CFF).

The NBC group made headlines this past March as the first-ever homosexual group to march with an identifying banner in the event’s 250-plus-year history. Parade organizers had announced their decision to let the group march in September of last year.

Permitting [email protected] to march with its homosexual banner, was a “gesture of goodwill” toward the LGBT community, parade organizers said. But they said the policy change would also ensure the inclusion of a pro-life group.

There were reports that pressure to allow NBC’s homosexual activist group to march came in the midst of the impending expiration of the Parade’s contract with NBC to broadcast the parade.

The pro-life CFF had applied to march just after the policy change was announced last year. CFF repeatedly attempted to communicate with parade organizers, and it was only after the group sent legal notice that it received an official denial from the parade.

Rex told LifeSiteNews that so far no pro-life group she knows of has applied or been selected to march in 2016.

“It's time to choose: God or mammon?” Rex told LifeSiteNews. “The parade is now a joke.”

Adding to dispute over the parade this year was New York Cardinal Timothy Dolan’s involvement.

The archbishop of New York generally celebrates Mass at St. Patrick’s Cathedral just before the parade’s kickoff, and then views the parade from the cathedral steps.

This year Cardinal Dolan served as grand marshal as well, and defended the parade committee’s decision to allow the homosexual group to march.

Catholics were upset by the cardinal’s stance, arguing it would be used by the media to portray the Catholic Church as accepting of the homosexual lifestyle.

An overwhelming majority of the parade’s 18-member board supported Lavender and Green Alliance’s application to participate, according to Chairman John Lahey.

“We’re hopeful those who thought we didn’t go far enough in 2015 will feel more satisfied,” Lahey said. “We don’t want the false impression that we discriminate.”

Lavender and Green Alliance chairman and co-founder Brendan Fay said he was happy after he got the call from Lahey the night of the vote.

“This is a breakthrough. It’s a marvelous moment,” Fay said. “My thoughts went back over 25 years and I thought of many people who had fought, protested, stood up for this very moment.”

Former State Senator Tom Duane, who has been arrested several times protesting the parade’s prior ban on allowing homosexual groups, said the vote approving Lavender and Green Alliance is “a good sign of even more good things to come.”

Various pro-homosexual activists and politicians weren’t satisfied with just one homosexual group marching this year, with Mayor Bill de Blasio boycotting for this reason. It’s not known if the mayor will participate in 2016.

Some activists still want more than two groups in the parade, but will take the victory for now.

“Is everything absolutely perfect? It never is,” said longtime gay activist Allen Roskoff. “But this is major. A lot of us put a lot of blood, sweat and tears into this and it just goes to show that times are changing. We’re very happy.”

“It’s contemptible. It’s become a circus. I will never march with them again,” Donohue said. “They should no longer be able to call it the St. Patrick’s Day Parade.”

Rex told LifeSiteNews she believed that if the parade committee were to let her pro-life group march, it would likely result in pro-abortion protests and another public relations disaster for the parade, or CFF would be allowed in only to justify permitting abortion groups to march. Either way, the parade committee has failed to keep politics out of the parade.