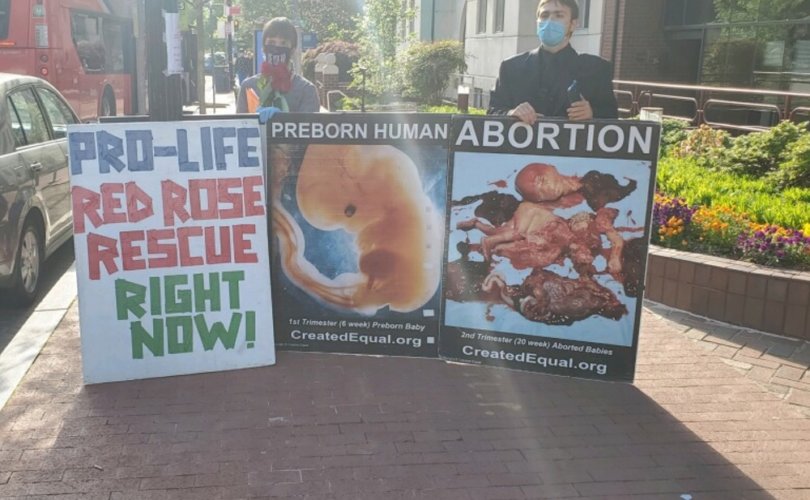 Pro-lifers outside Capital Women's Services on May 14, 2020

Update on May 14, 2020 at 7:41 p.m.: Father Fidelis Moscinski and Will Goodman were arrested at Capital Women’s Services, bringing the total number of rescuers arrested today to four. Imbarrato said all four of them were released around 2:00 p.m. EST.

WASHINGTON, D.C., May 14, 2020 (LifeSiteNews) – A Catholic priest and pro-life activist were just arrested for refusing to leave an abortion center in the nation’s capital, and three more – one of whom is also a priest – are risking arrest inside another abortion facility.

Father Stephen Imbarrato and Linda Mueller were arrested this morning inside SurgiClinic, a late-term abortion center in D.C.’s upscale Foggy Botton neighborhood, near George Washington University. Today is the 15th anniversary of Imbarrato’s ordination to the Catholic priesthood.

Father Fidelis Moscinski, CFR, Will Goodman, and Joan McKee are inside Capital Women’s Services, a late-term abortion facility that advertises abortions up to 36 weeks into pregnancy. The facility, whose online reviews are replete with criticisms of it as “terrifying,” “dirty,” “filthy,” and “unprofessional,” shares a building with a D.C. Department of Health office.

The activists are conducting a Red Rose Rescue during which they offer moms roses and beg them to not to go through with scheduled abortions. The Red Rose Rescue movement is inspired by Canadian pro-life activist Mary Wagner. It is something of a revival of the rescue movement of the early days of the pro-life movement, before the Federal Access to Clinic Entrances Act (FACE) imposed harsh penalties on pro-lifers who save babies by physically blocking “access” to abortion facilities.

“Steven Brigham, who allegedly owns Capital Women's Center, and Cesare Santangelo, who owns and operates SurgiClinic, both have notorious and well-publicized pasts as abortionists,” Imbarrato told LifeSiteNews. “In spite of their dark histories, because they operate in Washington, D.C. – which offers no abortion restrictions or any oversight of abortion facilities – these two men go unnoticed because they operate in multi-unit buildings.”

Imbarrato, who spent seven days in a Washington, D.C. jail for his participation in a 2017 rescue, told LifeSiteNews the layouts of SurgiClinic and Capital Women’s Services pose unique challenges to pro-life activists.

“Rarely if ever do pro-lifers pray or counsel in front of these facilities because, the offices being hidden in multi-unit buildings, pro-lifers cannot normally access or identify the women entering the building as pregnant moms in crisis,” the priest explained. “Thus we enter the buildings and counsel the women in the waiting rooms or in the halls outside the waiting rooms of these abortionists. Many babies have been saved in past Red Rose Rescues in these facilities – babies that otherwise would have died.”

The rescuers are reportedly wearing masks and not standing close to others in accordance with the current recommended coronavirus guidelines. Washington, D.C. Mayor Muriel Bowser just extended the city’s strict lockdown until June 8, under which abortion is apparently considered essential.

“Our primary concern is lovingly interacting with the moms in the hope of saving their babies,” said Imbarrato. “All the rescuers risking arrest trying to save these babies are serious Catholics and thus are additionally motivated by the fact that these governments which sanction, protect, and fund the murder of babies have, in this COVID-19 crisis, deemed these murders as ‘essential’ while proclaiming the Catholic Church ‘non-essential.’ As a Catholic priest, and I am sure my Catholic colleagues would agree, trying to save babies from the intrinsic evil of abortion is essential and necessary.”

“Red Rose Rescues are about directly intervening to save unborn babies from being murdered,” Imbarrato said. “I use the term ‘murder’ because in this, the 25th anniversary of the promulgation of Evangelium Vitae, I am constantly reminded that Saint John Paul II told the world that we need ‘to look the truth in the eye and call things by their proper name without compromise.’ Then he referenced abortion as ‘murder’ (EV article 58).”

He said the rescuers today chose the nation’s capital because it “is the center of our government which has sanctioned, protected, and funded the daily mass murder of preborn children for over 47 years.”

In the 25 years since the publication of Pope John Paul II’s pro-life encyclical Evangelium Vitae, “a strong case can be made that the Church has not proportionately responded in word and deed to this worldwide holocaust,” said Imbarrato. “Some Catholics have said that this reality alone is a sign that the Church has rendered itself ‘non-essential’ and in that time frame has allowed worldwide abortion to become ‘essential.’”

There have now been close to 20 Red Rose Rescues in the U.S. since 2017.  Legally, they have resulted in charges being dropped a number of times, notably in federal court; others have ended in trespassing convictions. The state of Michigan has treated rescuers the most harshly, jailing pro-lifers and even charging four with a felony for obstruction of officers. Michigan’s attorney general is a lesbian in a same-sex “marriage.”

The first Red Rose Rescue conference is scheduled to take place the first weekend of November, right after the 2020 presidential election (it had been scheduled for April, but organizers were forced to postpone it because of the coronavirus).

“We are hoping to encourage many to join our prayerful and peaceful activism ministry designed to save babies [who] otherwise would die from abortion,” said Imbarrato. “Red Rose Rescues are not just about risking arrest to save babies, but about prayerful witness: to moms to save their babies, to the workers to leave the industry of death, to law enforcement and courts which protect the killing, and to the many people we encounter on the sidewalks where we rescue and who hear or read about our ministry of saving babies.”

“The overwhelming majority of people involved in the Red Rose Rescue movement do not risk arrest, but are equally needed and important in this effort to save the unborn and bring abortion to a decisive end in our country.”