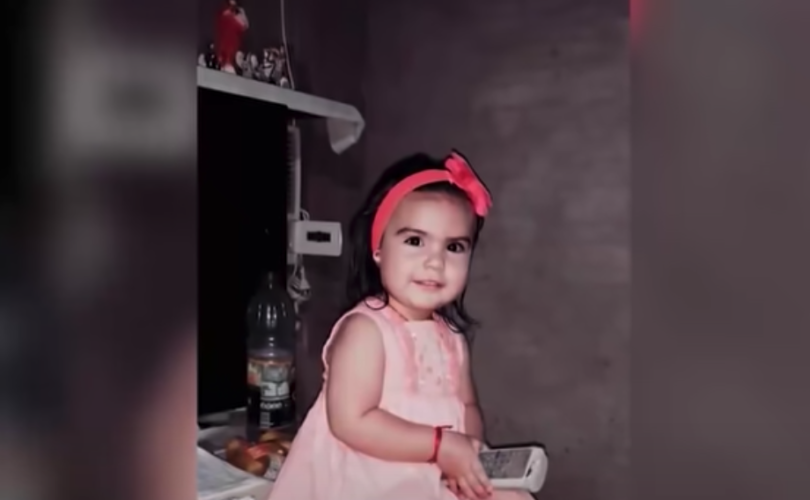 TUCUMÁN, Argentina (LifeSiteNews) – A three-year-old girl in Argentina died of a heart attack the day after receiving a COVID vaccine required for her to enter kindergarten, her mother said.

Speaking with Telefe Tucumán, Miryam Suárez said the vaccine and government mandate killed her daughter, Ámbar, who had been healthy and “full of life.”

“I pre-enrolled her in school so that next year she would enter kindergarten, because now they force you when it comes to the vaccine,” Suárez said. “She was healthy. She was fine. She was not ill and didn’t have COVID.”

Suárez took her daughter to get vaccinated on December 16. Ámbar passed away the next day after collapsing while playing with her friends. “She just collapsed and fell. I cannot believe it,” Suárez said.

The government “demands so much that they get the vaccine, and I know that the vaccine killed my three-year-old daughter,” the devastated mother continued. “She was fine. She did not have any health issues, nor was she a sick child. She was healthy, full of life.”

“This government that forces you [to get the vaccine] killed my three-year-old baby.”

Ámbar received the Chinese Sinopharm vaccine, which Argentina approved for children between the ages of three and 11 in October.

The Ministry of Public Health of Tucumán issued a statement on December 17 regarding Ámbar’s death, noting that police have launched an investigation into the incident:

On Thursday, December 16th 2021, at 12:00 pm, a three-year-old patient in cardiorespiratory arrest entered the Emergency Room of Hospital del Niño Jesús. Advanced resuscitation was performed and, when there was no response, [Ámbar Suárez’] death was declared. She has a history of taking the first dose of the Sinopharm vaccine the day before. Following protocol, police and judicial personnel have intervened and have ordered her autopsy. Considering the history of COVID vaccination, contact with family members has been initiated to gather pertinent information, evaluate other background information, and initiate an investigation of this unfortunate episode.

Argentina moved aggressively last year to vaccinate every child over the age of three by the end of 2021. “Argentina will finish 2021 with the full coverage and protection of people aged over 3 years,” health minister Carla Vizzotti vowed in October.

Children and teenagers face virtually no risk of death or serious illness from COVID-19. Between 0-0.03 percent of COVID cases in the United States under age 18 have resulted in death, according to the American Pediatric Association. The survival rate for coronavirus has been estimated at no lower than 99.7 percent for all age groups under 60 years old.

Numerous deaths and serious injuries, including heart inflammation and other cardiac issues, have been reported in children soon after a COVID jab. VAERS, the vaccine injury tracking system of the U.S. government, has reported dozens of cases of children dying within days of vaccination.

A 15-year-old boy in California with no underlying health conditions died of stress cardiomyopathy last year, two days after his second Pfizer injection, mirroring a similar incident in Michigan. In Texas, a 16-year-old died five days after his first dose of the Pfizer shot in April, suffering from an enlarged heart double its normal size, his father said.

Vaccines & Children: What are the risks?