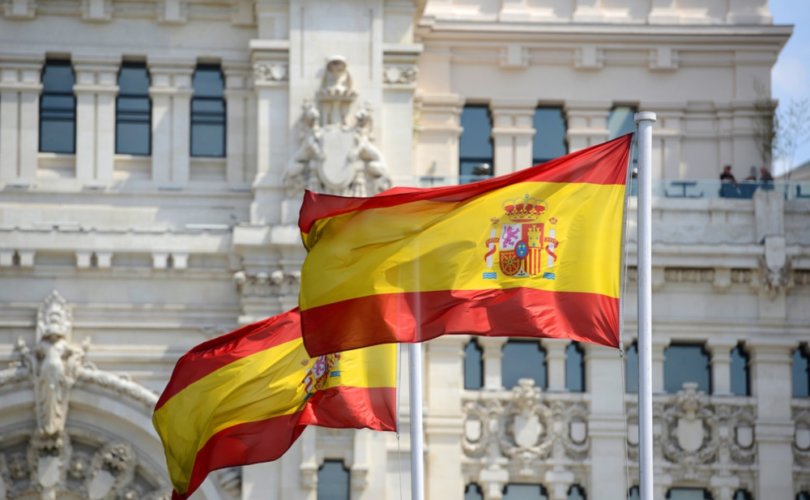 June 15, 2020 (LifeSiteNews) — Spain has lost nearly 2.4 million babies to abortion in 33 years, since the killing of the unborn became legal there in 1985 — the equivalent of the population of twelve rural provinces in a country with fewer than 48 million inhabitants. More than one third of these abortions took place over the years from 2011 until 2018, as abortion rates kept rising, reaching over 100,000 every year.

The Spanish statistics on abortion, as released this Monday by the “Instituto de Politica Familiar” — the IPF, a pro-family movement that has special consulting status at the United Nations Economic and Social Council — show the sheer size of the tragedy faced by Spain, where the birthrate has plummeted to 1.26 children per woman of childbearing age.

That is way below the minimum rate for replacement of generations in developed countries: 2.1 children per woman of childbearing age. Had the 2.4 million pregnancies that were cut short by abortion been allowed to reach their term, the Spanish birthrate would be 1.6 child per woman today — not enough, but at least the population pyramid would no longer be top-heavy, with more elderly people than children and young people. Today, Spain has reached a stage where the population is in “negative growth” since 2015, with a balance of -54,944 in 2018.

At that point, the curve descended to about 95,000 abortions a year, but 2010 is the year when chemical abortion was made legal. The medical follow-up and registration of chemical abortions is not compulsory in a number of autonomous regions in Spain, explains the IPF’s study; by extrapolation, and given that about a quarter of all abortions in Spain are now chemical instead of surgical, an estimated 7,000 undeclared abortions, at least, take place each year in the country. All the same, the general “official” curve has been slowly rising again since 2015.

The abortion industry, which operates mostly in private facilities, generates some 60 million euros’ worth of income each year. The number of abortion centers itself has gone up and up, from 146 centers in 2010 — a pivotal year for abortion — to 211 in 2018.

Successive governments, be they Christian-Democrat or Socialist, have never actually restricted access to abortion. In one of the most revealing chapters of the study, the IPF highlights how left-wing governments have facilitated access to abortion while their “conservative” successors have done nothing to reverse the trend; they have “consolidated” the progressive laws, according to the IPF.

Under the right-wing government of José Maria Aznar (PP), from 1996 to 2003, the Spanish abortion laws were not touched or modified in any way, and yearly abortion statistics kept rising. This was despite the legalization of the morning-after pill, which has potential abortive effects. According to a study by Alicia Fernandez and Andrea Gimenez of the University Hospital of Puerto Real, Cádiz in 2012 quoted by IPF, 1 to 10 percent of women who use the so-called “emergency contraception” pill abort a conceived child because the pill creates a hostile environment preventing implantation of the embryo in the womb.

The IPF gives an estimate of at least 7,000 such unnoticed abortions each year, given that about 700,000 morning-after pills are sold annually in Spain, no prescription being necessary for the high-hormone drugs. Underage girls can obtain them without parental consent from age 16.

Free access to the morning-after pill was introduced by José-Luis Zapatero’s socialist government (2004–2012) in 2010. The same Organic Law no longer decriminalized abortion, but rather proclaimed abortion was a “woman’s right.” Abortion has been since then fully legal up to 14 weeks’ gestation. Up to 22 weeks, risks to the life or health of the mother justify late abortion, as well as “serious anomalies” in the child. Abortion is possible up to term if the condition of the unborn child is deemed “incompatible with life.”

The 2010 law also allowed chemical abortions that are much easier to obtain and implement.

Under Mariano Rajoy (Partido Popular, center-right, from 2012 to 2018), all these liberal dispositions remained intact except for the 2010 measure that allowed girls to abort without parental consent from age 16. Before that, Rajoy and his team pulled back a restrictive draft law by justice minister Gallardon, who lost his post over the affair.

The IPF’s presentation of its study offers many graphs, visual representations of its wide-ranging statistics and striking examples and comparisons. One of its main findings is that increasing numbers of young women and girls have recourse to abortion which is, the IPF claims, more and more used as a “contraceptive” method.

Only France (with over 200,000 each year) and Germany (over 100,000) have more yearly abortions than Spain in the European Union; it should be noted, as a complement to the IPF study, that contraceptive prevalence is high in these countries. In France, in 2013, it reached 97 percent of the 70 percent of sexually active women who wanted to avoid pregnancy.

While the IPF repeatedly calls the situation “dramatic” because of the nature of abortion, it also underscores that the lack of young people is already weighing heavily on the social security system. As the population grows older, with increasing pension and health costs, income is also on a downhill slope as the active population shrinks, with less income tax and social contributions to provide for the needs of the elderly.

“The probable result will be the reduction or elimination of social benefits because of lack of revenues, especially regarding pensions,” the IPF report concludes.

At the end of its report, the Instituto de Politica Familiar makes a series of proposals to reverse the trend, suggesting that the abortion law be repealed, in particular those dispositions that speak of the “psychological risk” of pregnancy “for the mother.”

It calls for studies to be made of the causes and consequences of abortion in Spain, together with a study of the morning-after pill and restrictions on its sale.

The IPF wants a national plan to boost the birthrate and campaigns to teach about the realities of the birthrate, pregnancy, and maternity. Abortion should be included as a case of “violence against woman and child in the prenatal period,” it says.

The IPF also wants laws to protect motherhood and promote demography in a cross-party agreement, a general prohibition of surrogacy, and government measures to reduce the numbers of abortions.

Among these measures, the IPF would like specific help to be given to teenage girls and immigrants, together with the creation of pregnancy centers available to all women who need help to take their pregnancy to term and the promotion of adoption as an alternative to abortion.

A special state budget line should be opened to fund NGOs helping pregnant women, adds IPF, as well as material and economical support for women, including those who want to stay at home to look after their kids during the first year of life.