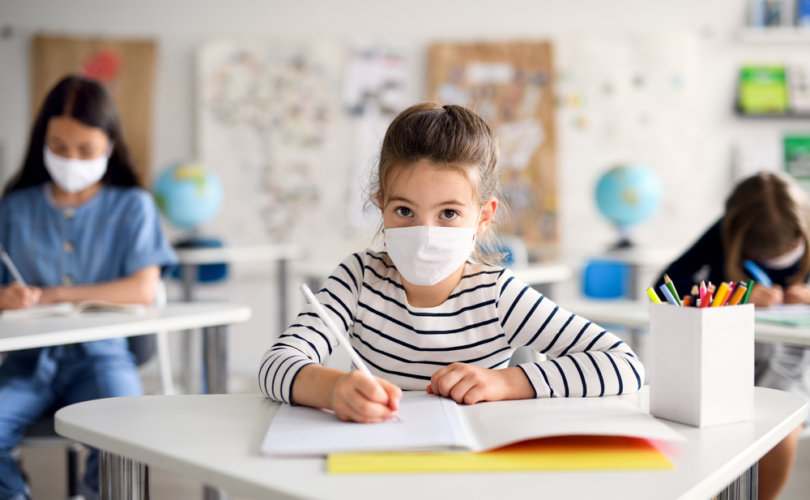 LOS ANGELES COUNTY, California (LifeSiteNews) — Tens of thousands of schoolchildren in California’s Los Angeles Unified School District are set to be refused access to in-person learning in the coming semester because they are not “fully vaccinated” against COVID-19.

The Los Angeles Times reported that roughly 34,000 students who haven’t gotten their full regimen of COVID-19 injections no longer have time to do so ahead of the January 10 start of the second semester, adding that “no leniency or extended deadlines” are currently “under public discussion.”

About 34,000 L.A. Unified School District students have not yet complied with the vaccine mandate.

And there’s now no longer enough time for those who haven’t gotten their first jab to be fully vaccinated by the start of the second semester https://t.co/QFZX6TQolL

The second-largest school district in the nation, the Los Angeles Unified School District (LAUSD), has enacted one of the most severe COVID-19 jab mandates in the U.S., requiring all students 12 years old and older to get the experimental COVID-19 shots regardless of the fact that children face extremely low risk from the coronavirus. The district offers the jabs to students between the ages of five and 11 but does not at this time require them.

Under the mandate, schoolchildren aged 12 and up who do not take the abortion-tainted jabs will either be sidelined into the district’s independent study program or forced to attend a public school outside of Los Angeles, which may prove to be a serious hardship, particularly for children from low-income families.

Moving 34,000 children to independent study, however, may also not be feasible.

According to the L.A. Times, the district might not have sufficient resources to accommodate the unvaccinated schoolchildren, as its independent study program has reportedly been “beset by staffing shortages and confusion after it was inundated at the start of the school year with about 10,000 students, a number that grew to 16,000.”

Sharon McKeeman, founder of Let Them Choose, a San Diego County-based group that is leading legal challenges against COVID jab mandates for schoolchildren, told the newspaper that forcing children into distance learning “would be a significant equity issue,” particularly since remote education “as already been proved to be a failure.”

Vinay Prasad MD MP, a hematologist-oncologist and Associate Professor in the Department of Epidemiology and Biostatistics at the University of California, appeared to agree, arguing in a December 8 tweet that “[t]hrowing out 34,000 kids when they need school the most is bad policy and runs counter to progressive values”

Throwing out 34,000 kids when they need school the most is bad policy and runs counter to progressive values 👇👇👇https://t.co/TWR0pAm1Rs https://t.co/jGC3h6xkY6 pic.twitter.com/p2lHGbTlu3

News of the 34,000 students being pushed out of in-person learning for failing to meet the district’s strict COVID requirements comes after almost 500 LAUSD employees were fired this week for defying a COVID jab mandate, with the school board voting 7-0 on Tuesday to fire the noncompliant employees.

An ABC affiliate reported that “[m]ost of those fired had likely been on leave since mid-October when LAUSD staffers were to have received at least their first vaccine dose,” since “[e]mployees were required to receive their second dose by Nov. 15.”

The majority of employees have complied with the district’s employee jab mandate, either getting the shots or successfully requesting an exemption due to personal beliefs.

According to the L.A. Times, while employees have been permitted to request exemptions based on personal beliefs, students are not given the same option.

It’s unclear why children, who may share the religious views of their parents and have a sincere religious or conscientious objection to the shots, have been denied the option of requesting an exemption to the mandate based upon personal beliefs.

Many Americans harbor ethical reservations about the use of cell lines derived from aborted babies in the development of the shots.

It’s also unclear why children, who are at extremely low risk from COVID-19 itself, are forced to receive an experimental injection with no known long-term effects.

Low risk from COVID-19 to children combined with the thousands of reports of serious adverse events and deaths following the jabs has led numerous experts to criticize the push to inject children with the experimental shots.

In an October article for the Brownstone Institute Dr. Paul Elias Alexander, who served in the Department of Health and Human Services (HHS) during the COVID-19 pandemic under the Trump administration, called the push to vaccinate young children “dangerous” and “absolutely reckless.”

“The risk-benefit discussion for children with these Covid-19 injections is a very different one than that for adults,” Dr. Alexander said. “The fact is that this is a completely novel and experimental injection therapy with no medium or long-term safety data (or even definitive effectiveness data). If we move forward with the vaccination of our children without the proper safety testing, then we will present them with potentially catastrophic risk, including deaths in some.”

Late last month, Yale epidemiologist Dr. Harvey Risch recommended that parents pull their children out of school rather than give them the jab.

“Honestly, I would organize with other parents to take them out of the school and create homeschooling environments,” Risch said. “There’s no choice. Your child’s life is on the line.”

While stating that COVID-19 vaccination “is not a high risk that’s going to kill every child,” Risch said the danger posed by the shots is “enough of a risk, that on the average the benefit is higher for homeschooling than it is for vaccination and being in school.”