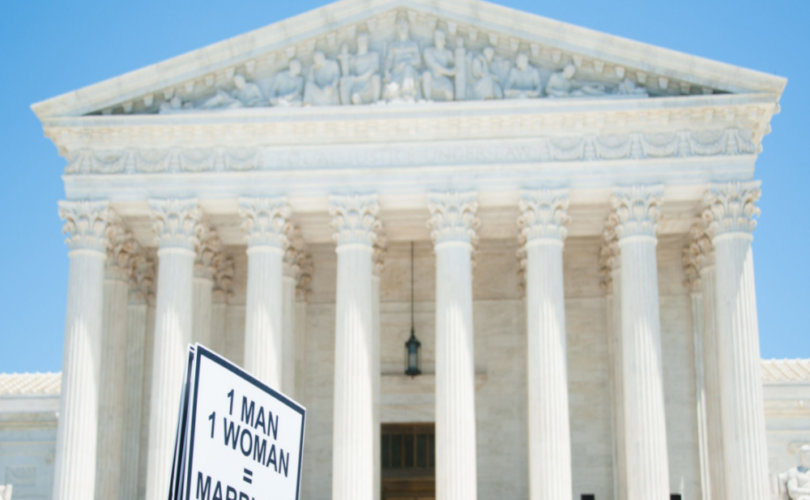 WASHINGTON, D.C. (LifeSiteNews) — It took 49 years to overturn Roe v. Wade, but with principles laid out in the recent Dobbs v. Jackson decision, the legal landscape is now being paved for the rolling back of other U.S. Supreme Court decisions that many have dubbed leftist “judicial activism.” Were the Obergefell v. Hodges decision to be overturned, same-sex “marriage” would be illegal in most states after a short-lived tenure of only a few years.

According to the National Conference of State Legislatures and Stateline research, 35 states currently have laws on the books against same-sex “marriage,” either in their constitutions, state legislation, or both. On the other hand, several states had legalized same-sex “marriage” even before 2015, including Massachusetts (which was the first to do so in 2003), Connecticut, Hawaii, Maine, New Hampshire, New York, Vermont, and Washington.

With the different political composition of the nation’s high court today in comparison to 2015, when Obergefell unilaterally swept aside state laws on the issue, increased attention is being afforded the very real possibility of the Supreme Court revisiting the case. Should Obergefell be overturned, the legislation and constitutional prohibitions of 35 states would become enforceable law, and the path would be open for other states to follow suite.

Jason Pierceson, a political science professor at the University of Illinois-Springfield and author of “Same-Sex Marriage in the United States: The Road to the Supreme Court and Beyond,” commented on the issue: “These constitutional amendments are still on the books and would likely be put in place. Most of them would arguably be in effect if the court overturns Obergefell.”

In his concurring opinion on the Dobbs case, Justice Clarence Thomas urged the court to revisit Obergefell based on the principles by which they had decided Dobbs. He indicated that just as abortion, being neither expressly mentioned in the Constitution nor hidden in its due process clause, was a matter falling properly within the jurisdiction of the states, so the other so called “rights” the court has fabricated from the due process clause should be returned to the states, such as same-sex “marriage.”

“The notion,” Thomas wrote, “that a constitutional provision that guarantees only ‘process’ before a person is deprived of life, liberty, or property could define the substance of those rights strains credulity for even the most casual user of words … The resolution of this case is thus straightforward. Because the Due Process Clause does not secure any substantive rights, it does not secure a right to abortion.”