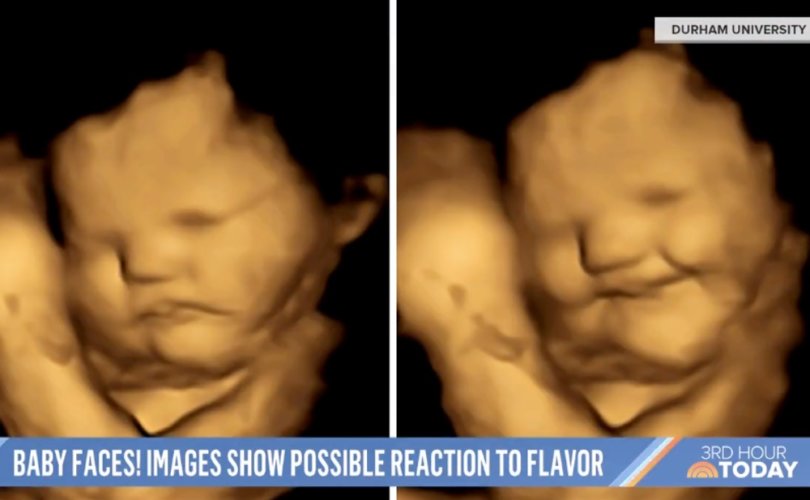 (LifeSiteNews) – New research shows that babies in the womb react to the flavors of the foods their mothers eat.

A study done at the University of Durham in Britain found that unborn babies are able to detect flavors through aromas that are present in amniotic fluid beginning around 14 weeks gestation. The study also showed that the unborn child begins to smell around 24 weeks gestation.

Durham University used 3D imagery in its study, with ultrasound images clearly showing the babies smiling in reaction to the flavor of carrots, and grimacing when their mothers ate kale.

The hosts of the left-wing Today Show inadvertently acknowledged the humanity of babies in the womb as they discussed the study.

While this newfound study is a tribute to the complexity of life before birth and attests to the fact that the unborn are aware and do in fact react to stimuli, many responded to the Today Show on Twitter by noting the inconsistency of the pro-abortion viewpoint with the study’s findings.

“Better delete this, Today Show,” tweeted one woman. “People might think that a fetus is a human being.”

Better delete this, Today Show. People might think that a fetus is a human being.

“Hey, has anyone captured their facial expression just before an abortionist crushes their skull?” another user tweeted.

Hey, has anyone captured their facial expression just before an abortionist crushes their skull?

“They also react to torture,” said another.

They also react to torture