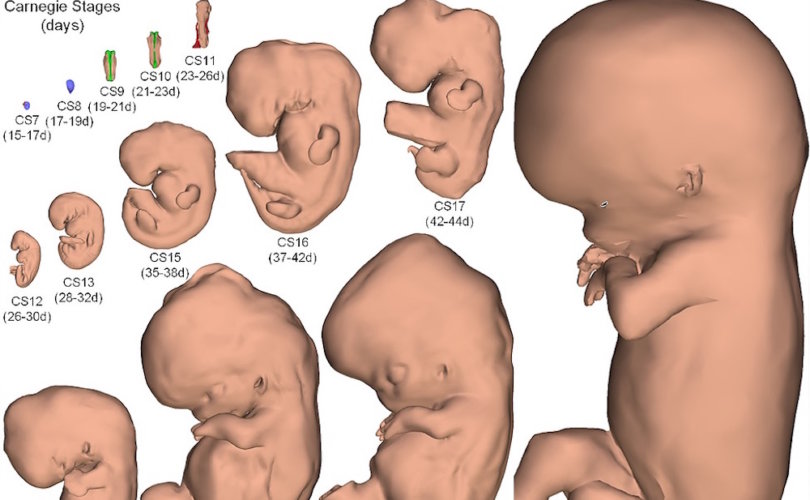 November 25, 2016 (LifeSiteNews) — A team of Dutch embryologists has produced an unprecedented three-dimensional atlas demonstrating how the unborn child develops in the first eight weeks of life.

“Everyone thinks we already know this, but I believe we know more about the moon than about our own development,” Bernadette de Bakker, of the University of Amsterdam, who co-led the project with Professor Antoon Moorman told the Guardian.

It took the University of Amsterdam team over 45,000 hours to meticulously map the development of the unborn child, during which time embryologists supervised more than 75 students who analyzed over 15,000 tissue screens from the US-based Carnegie Collection of Embryos.

That collection, begun in 1913,  has a number of human embryos dating from some 60 to 100 years ago, which were collected during procedures such as hysterectomies, reported the Guardian.

The results of the project are “14 interactive three-dimensional models of human embryology and a database encompassing 34 embryos spanning the first 2 months of human development,” according to a synopsis in Science Magazine.

The embryo atlas will allow scientists to research, among other things, the development of congenital “malformations…which have an incidence of 3% in the human population and cause up to one-quarter of all neonatal deaths,” it noted.

The 3D Atlas of Human Embryology can be viewed here.

The research on the atlas has already revealed “that some organs in humans develop [far] earlier than they first arrive in chick or mouse embryos and some [develop far] later,” de Bakker told the Guardian.

This has implications for developmental toxicology, which currently uses mouse or chick embryos as model organisms to research the effect of certain drugs or other chemicals, she said.

The creation of the Dutch atlas underscores how little is still known about the growth of the human person immediately after conception, but, unlike when the Carnegie Collection of Embryos began, the current field of embryonic research is fraught with moral peril.

In May 2016, a UK and US team announced it had managed to keep lab-created human embryos alive up to 14 days — the point at which these tiny human beings would naturally implant in the womb, and past the point where one may have split to become two, or, in exceedingly rare cases, three.

For this reason, 14 days is the legal limit in many countries on keeping lab-created human embryos alive, according to the Guardian, and up to the May s0-called “breakthrough,” it was a limit also imposed by technology.

Magdalena Zernicka-Goetz, the Cambridge University professor who lead the UK research team, praised the Dutch 3D production as “a beautifully careful assessment of development through analysis of material with limited availability,” noting that “it will provide an invaluable atlas to guide future study.”

But she used the knowledge gap on embryology to push for expanding the 14-day limit on keeping lab-created human embryos alive for experimentation, now that it is technologically feasible, telling the Guardian that “there is a strong scientific argument for more discussion about the possibility of extending this limit.”

That is true especially “given our great ignorance of the mechanisms of human development through these stages and the great value to be gained for the understanding and treatment of developmental diseases and for stem cell biology.”

Matt Wojciechowski of the Canadian pro-life organization Campaign Life Coalition told LifeSiteNews the 3D embryo atlas would be an “invaluable resource” for demonstrating the sanctity of life in the womb.

“Who can possibly doubt, when looking at these 3D images, that the preborn child is a separate being from his mother from the moment of conception, and should be protected?”

Yet he also raised concern about the dangerous moral direction of the embryology field. “It’s really unfortunate that people will use any reason to justify morally impermissible practices, such as creating embryos in a lab, and to push for even greater abuses against human life, whatever stage it’s at, in the name of scientific research,” he said.