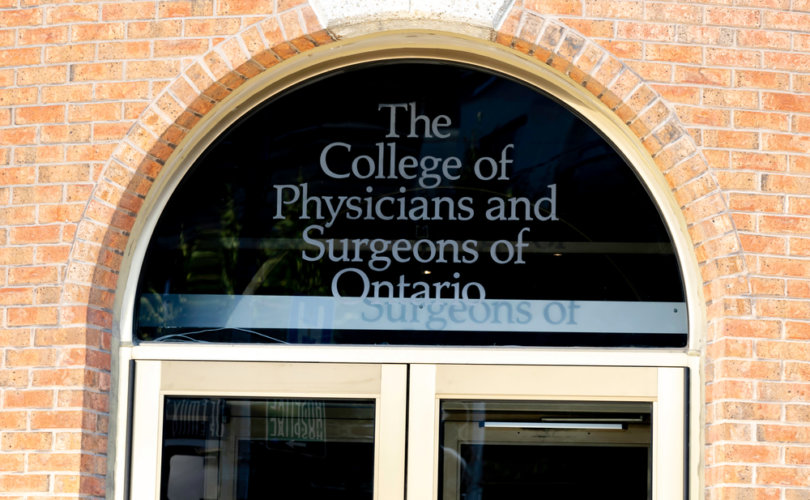 OTTAWA (LifeSiteNews) — Four Ontario doctors have become the target of legal action by the College of Physicians and Surgeons of Ontario (CPSO) after refusing to cooperate with an investigation into why they are giving “inappropriate” medical exemptions for the experimental COVID shots.

Dr. Mary O’Connor, along with Dr. Mark Trozzi, Dr. Rochangé Kilian, and Dr. Celeste Jean Thirlwell, became the subjects of a legal filing by the College of Physicians and Surgeons of Ontario last week after they refused to hand over confidential patient information pursuant to an “investigation” by the college into why they granted medical exemptions to patients for the experimental COVID-19 vaccines. The college is asking the Ontario Superior Court to mandate their compliance.

According to the college’s filing against O’Connor, the investigation concerns “her conduct in relation to the COVID-19 pandemic and her completion of medical exemptions for COVID-19 vaccinations and diagnostic testing.”

Instead of releasing the records, the college contends that O’Connor insisted they must first “define COVID-19″ and that she “will not be able to move forward without the College’s precise definition of COVID-19.”

The college also says that O’Connor requested them to “advise if [the college] knows the ingredients of the gene therapy experiments, the so-called vaccinations, being administered to humanity without informed consent.”

The filing in Superior Court, which seeks to mandate that the doctors provide medical charts, patient information, and even allow investigators entry into their offices to copy or remove “necessary documents,” is set to be heard in January.

O’Connor’s lawyer, Michael Swinwood, said she will fight the case in court. “I don’t see the need for an investigation,” the attorney said. “There is no malpractice or incompetence involved.”

Trozzi echoed a similar statement as Swinwood, stating that “an Ontario doctor is free to provide medical exemptions relating to COVID-19 vaccinations as he or she sees fit.”

Going a step further than Swinwood, Canadian constitutional rights lawyer Rocco Galati previously stated in August that doctors and public servants who have mandated or promoted the shots without making a “full, true and plain disclosure of the known risks” have transgressed Canadian laws related to “criminal negligence” and “crimes against humanity.”

According to the Ottawa Citizen, the college has taken issue not only with the writing of medical exemptions but the general conduct of the doctors, specifically mentioning O’Connor’s use of the term “gene-therapy experiments” as opposed to calling the injections “vaccinations.”

Pro-experimental injection advocates in medicine, academia, media, and the government have  notably opposed calling the jabs “experimental” or using the term “gene therapy,” despite the vaccines still being in clinical trial phase until 2023, and the inventor of mRNA vaccine technology, Dr. Robert Malone, stating in an interview that the term “gene therapy” is accurate.

“It is gene therapy applied to vaccines,” confirmed Malone, while adding that he understood many people’s reluctance to take the experimental mRNA jabs.

“I respect their point of view,” the doctor stated. “They have a right to be wary about a new technology that’s not well understood.”

According to data from the World Health Organization, the European Union, and the Vaccine Adverse Event Reporting System, the COVID-19 so-called vaccines have been linked to more injuries and deaths than all other vaccines since 1990 combined, with injury figures in the millionsand deaths in the tens of thousands.

In fact, Health Canada lists various potentially serious adverse reactions to the jab, including heart inflammation conditions such as myocarditis and pericarditis, blood clots, capillary leak syndrome, and Guillain-Barré Syndrome, among others.

The shots, which are set to be administered to children as young as five in Ontario once “approved” by Health Canada, have been known to be especially injurious to young people and children.

In a report released by Public Health Ontario, more than 100 young people age 12 to 24 were diagnosed with myocarditis, the potentially fatal heart inflammation condition, after the jab.

Those are only the reported cases. The real total of such injuries from Covid injections is considered  to likely be much higher due to various factors. One is the reluctance of health care providers to fill out time-consuming vaccine injury reports. There have also been numerous reports of heavy pressure from hospital administrators to not report injuries or deaths as being caused by the Covid injections.

A series of “sudden” and “unexplained” deaths in young people in Ontario after the jab has been noticed by doctors and politicians, leading an Ontario Member of Provincial Parliament to urge the provincial police to investigate immediately.

In spite of the numerous reports of death and injury, as well as consistent pleas from members of the medical community and the public, the CPSO insists that medical exemptions are only to be given in cases in which the first dose of the vaccine led to an injury. Meaning that regardless of a person’s medical history, unless they had a serious reaction to the first COVID-19 shot, they will not be exempt from the second.

In response to the actions of the CPSO and other regulatory bodies in Canada, Trozzi wrote, “[Medical bodies in Canada are] persecuting ethical and well-studied doctors who prescribe or even say good things about ivermectin. Meanwhile, they are muzzling any doctors who dare mention anything negative about the deadly COVID injections. The new ‘crime’ for doctors is ‘causing vaccine hesitancy.’ What a sick joke!”

“They are still doing this; and forcing people into dystopic and evil injections, that kills far more people than they will ever help.”