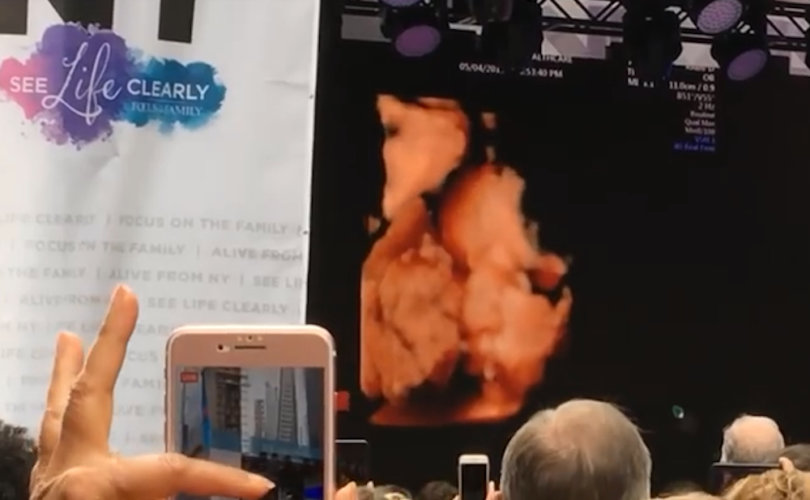 NEW YORK, May 6, 2019 (LifeSiteNews) ― The youngest child of pro-life author Abby Johnson made his on-screen debut in New York last week through a 4-D ultrasound.

Johnson and her unborn child appeared at Focus on the Family’s “Alive from New York” pro-life rally in Times Square on Saturday afternoon. The event was planned as an affirmation of the dignity of unborn human life in the face of New York state’s new pro-abortion legislation. During the rally, Johnson went into a mobile medical unit behind a stage where a technician transmitted a 4-D ultrasound of her child on giant screens in the square.

“For the first time in all my years of Times Square, I will never forget that moment,” he wrote for the Town Hall news website.

“In the middle of literally the world’s busiest intersection, a quiet fell across multiple blocks that was so deafening you could literally have heard a pin drop,” he continued.

“No angry chants in protests. No applause of agreement. Just a sleepy little baby’s face, in beautiful 4D, staring out across New York City’s busiest neighbourhoods.”

Between 10,000 and 20,000 people, including a number of abortion advocates holding a counter-demonstration, gathered in Times Square for the rally. When the sound of Johnson’s baby’s heartbeat was amplified, the crowd cheered.

Afterward, Johnson appeared on stage and announced that “life is winning.”

“We will see a day when abortion in this country is unthinkable,” she predicted.

Johnson, the board chair of the pro-life “Guiding Star Project” and subject of the recently released film Unplanned, is a former Planned Parenthood clinic director who had a change of heart in 2009 when she witnessed an abortion over an ultrasound machine.

Johnson is married and has seven children.

The rally featured musical performances and speeches by such pro-life luminaries as Jeanne Mancini of the National March For Life and Dr. Alveda King, the niece of the Rev. Martin Luther King Jr.

Vice President Mike Pence drew attention to the rally’s main event  on Saturday when he tweeted: “As Democrat Governors in NY & VA advocate for late term abortion & even infanticide – & Democrats in Congress refuse to allow a vote on the Born-Alive bill – TODAY in Times Square an ultrasound will be shown for all to see, demonstrating the miracle of life.”

Originally, Focus on the Family hoped to broadcast the ultrasound on Times Square’s famous billboards, but president Jim Daly revealed that the owners of the Jumbotrons, initially willing to rent them to the group, later voiced discomfort with what they were planning to do with them.