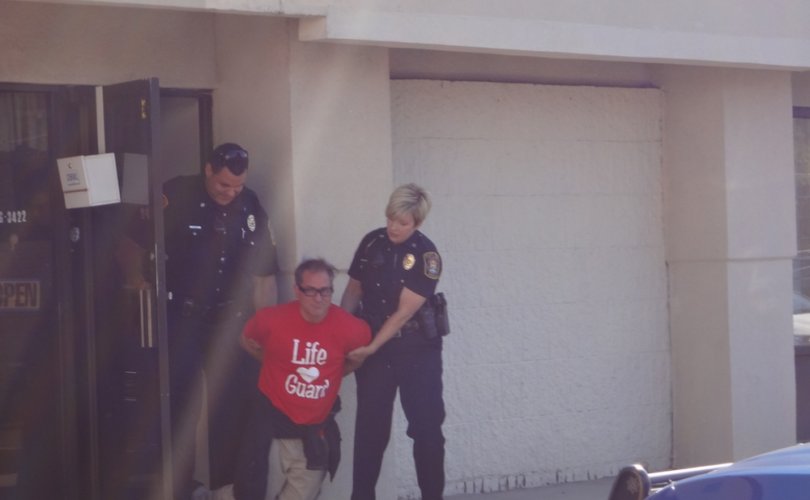 Update June 10, 2019, 2:19 p.m. EST: The rescuers are being charged with disturbing the peace, trespass, and resisting arrest. Resisting arrest is likely due to the rescuers' practice of passive resistance.

FLINT, Michigan, June 10, 2019 (LifeSiteNews) – Four peaceful pro-life activists were jailed Friday and charged after their arrest inside an abortion facility in Michigan, facing a heavy police presence while they sought to counsel women against abortion and offer them red roses and practical help.

They are being charged with, in addition to trespassing and disturbing the peace, a count of resisting arrest.

This was the latest Red Rose Rescue, a Mary Wagner-inspired revival of the “rescue” tactic that was successful during the early days of the pro-life movement. Before former President Bill Clinton signed the Freedom of Access to Clinic Entrances Act (FACE), pro-life activists would refuse to leave abortion facilities, sometimes even chaining themselves to abortion equipment. The FACE Act increased legal penalties for people who block abortion facility entrances, among other things.

At the Women’s Health Center of Flint, four rescuers – Will Goodman, Patrice Woodworth, Lauren Handy, and Matthew Connolly – entered the building at approximately 8:30 a.m. on Friday, bringing informative materials to share with the mothers inside. According to a woman (who did not wish to be identified) who had an appointment at the facility, there were approximately six mothers in the waiting room. She told LifeSiteNews that when the rescuers made themselves known, the abortion staffers whisked the mothers further inside and barred anyone from entering.

The unidentified woman said that a female staff member, who was wearing black scrubs, cursed and shouted at the rescuers in the waiting room. The staffer also touched and shoved the rescuers, according to the witness.

Inside the entrance of Women’s Health Center, LifeSiteNews spoke to Goodman. Wearing a red t-shirt bearing the title “Lifeguard,” Goodman said that he was willing to be arrested while providing information and prayerful witness. A veteran of pro-life action, Goodman said that he was inspired by Canadian pro-life advocate Mary Wagner, who has spent various stints in prison for interrupting the practice of killing unborn babies.

As a woman arrived at the office, Goodman told her, “Love is the solution. God is love. You don’t have to kill your baby. We can help.” Goodman said that, in his experience, giving information to expectant mothers as they come to abortion centers has deterred some of them from going through with the procedure. He offered a rose to one of the staff members, who rejected it.

Woodworth told LifeSiteNews that she wants to rescue women and babies from abortion, having experienced an abortion when she was 14 years old. She said that she felt abandoned at the time by family members, but now wants to offer help and her presence to women who feel lost.

“Some of them don’t know what to do,” said Woodworth, referring to women seeking abortion. Sharing information about the risks of abortion, and providing alternatives, is what her group wants to do, said Woodworth. “But I’d like to talk about Mother Theresa, who went anywhere to show love to the unwanted before they died. We are doing something similar.”

“We are here to show love for the babies before they die. We are here for them, and to recognize their humanity.”

Through the glass of the locked door of the abortion center, three rescuers could be seen praying and singing hymns. There were two women in the waiting room who had appointments; they subsequently left.

Woodworth was kneeling in prayer when a state police trooper arrived.

“I understand what you’re trying to do here,” the trooper said. “But you’re trespassing and you need to go off private property to protest.” Within 15 minutes, other law enforcement units arrived. Officers from the Michigan state police, Genesee County Sheriff’s office, and Flint Township police arrived. There were approximately 12 officers on the scene. Officer J. Stokes of Flint Township told this LifeSiteNews correspondent to leave the property, ostensibly for his own “protection.” The correspondent left under protest.

Within minutes, officers entered the abortion facility and began lifting the four rescuers out of the office to the waiting vehicles. The first was Goodman, followed by Woodworth and Handy. Handy was carried out by several officers and placed on the hot asphalt pavement while officers prepared to put her in a waiting vehicle. She audibly prayed throughout the ordeal.

In an interview with Monica Miller, also of the Red Rose Rescues, Handy complained that officers grabbed the scarf she was wearing in order to lift her. As for Goodman, he told Miller that officers used an unnecessary hold during the arrest, wrenching and injuring one of his hands. The four rescuers were taken to the city jail in Flint. They are prepared to refuse bail when they face arraignment in court.

Miller told LifeSiteNews that the four rescuers were taken to the Genesee County jail and were arraigned Sunday before Magistrate Rhonda Carey on trespass charges. On Monday, Miller told LifeSiteNews that Woodworth was bonded out over the weekend. She said that Handy, for reasons she does not yet know, was divested of her clothing and given a blanket to cover herself in a solitary cell. Handy may be bonded out of jail on Monday. The two men, Goodman and Connolly, remain in jail for the time being. The four rescuers will face a pre-trial hearing in the 67th District Court of Genesee County.

Miller explained that in addition to taking action at abortion facilities, her group has offered assistance to mothers that has included adoption referral, diapers, food, and housing subsidies. A former professor of theology at Madonna University in Livonia, Michigan, she has long been involved in the pro-life movement. She told LifeSiteNews that she spoke with at least two women outside of the abortion center, giving them her contact information while counseling them on alternatives to ending the lives of their unborn children. Unfortunately, on Monday, Miller encountered one of the two women who had decided after all to abort her baby.