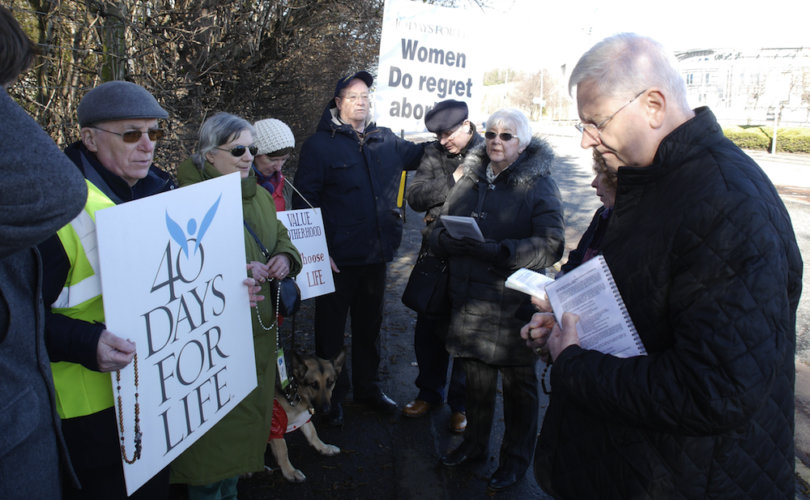 Archbishop Leo Cushley prays with participants at a 40 Days for Life vigil in Scotland.

March 31, 2017 (LifeSiteNews) — This year marks the 50th anniversary of legalized abortion in the United Kingdom, but in 2016 Rose Docherty said enough is enough and took on the challenge of starting 40 Days for Life in Scotland.

Since then, many others have joined the cause and now there is a strong, united pro-life group bringing encouragement to many women and men and to those suffering from post-abortive trauma. The Glasgow-based Sisters of Life area also involved in the efforts with an outreach program.

Docherty, who is the director of 40 Days for Life in Glasgow, is happy to report that the initiative has grown and expanded to Edinburgh, Dundee and Aberdeen. This year's prayer vigils started on Ash Wednesday and continue through Palm Sunday.

“The first casualty of abortion is as we know 'the truth,' so by standing publicly in solidarity with the women, men and children whose lives are cruelly damaged by abortion we seek to set the truth free,” Docherty said. “As St. Augustine said, “The truth is like a lion, you don’t have to defend it: let it loose, it will defend itself.”

Most abortions are done in Scotland through the National Health Service Hospitals in the same maternity units where mothers go to give birth.

Since the decriminalization law was passed in 1967, there have been more than eight million abortions in the UK. In Scotland, there were 12,082 abortions in 2015, which is approximately 30 babies a day in a country with just five million people.

“We have no way of knowing if or how many babies have been spared from abortion due to our efforts,” Docherty said, “but, please God, our prayers are making a difference. We do know that hospital staff appreciate our efforts.”

Clare Bremner, who works at Abortion Recovery and Care Helpline (ARCH), spoke at the 40 Days for Life opening rally in Glasgow’s George Square and faced down a vocal pro-abortion group.

“The two things that shocked me most when I started working at ARCH were how often women told me (abortion) wasn’t their choice and that no one had told them they would feel the way they do (after the abortion),” Bremner said. “It seems that women are being systematically mis-sold abortion and that the ‘consent procedures’ are pitifully inadequate, both in terms of being informed, (and) consent is pressurised or coerced.”

“The heartbreak that women suffer and the mental health problems that can follow are beyond cruel to women and surely this should be a matter of deep concern for everyone who cares about women and girls,” she continued. ”We do what we can, but there is a lack of post-abortive understanding and help for women – it’s as if no one wants to hear the truth or confront the reality. The private abortion providers and NHS advertise post-abortion counseling, and some women don't want their doctors to know they had an abortion, so there can be long waiting lists for NHS help.”

ARCH and other charities provide free help, Bremner said, but finding face-to-face counseling in other parts of the country is difficult.

Patricia MacLennan said she did not hesitate to step forward to lead the 40 Days for Life campaign in Edinburgh when she learned the facts about the number of abortion performed in Scotland.

“A staggering half a million babies have been aborted over a 50-year period (in Scotland alone), and it seems that this news is being censored by the media,” MacLennan explained. “Many folks who talk to us at the Vigil sites feel the same.’ They are incredulous at the figures as well as the fact that abortions are taking place in maternity units.”

Archbishop Leo Cushley of St. Andrews and Edinburgh is supportive. He joined a vigil to pray and encourage the participants to defend the sanctity of life.

“It gives us great spiritual encouragement to know that Archbishop Cushley is publicly backing our peaceful, prayerful efforts to end abortion, to help build a culture of life and to establish a civilization of love that supports both mothers and their unborn children,” MacLennan said.

Archbishop Cushley recounted his experience in a letter to the priests in his diocese, encouraging them to support the Lenten campaign with prayers and their presence.

“I had the chance yesterday to pray the rosary with those attending 40 Days for Life outside the new Royal Infirmary in Edinburgh. … These brave men and women — and children — find themselves praying for the unborn near a hospital where abortions take place and so they become the target of opprobrium, but also of support from the passersby,” he wrote. ”Keep them in your prayers and support them by drawing attention to the good, discreet and peaceful work that they are accomplishing patiently every day of Lent.”

Pro-lifer Paul Atkins of Edinburgh said the movement has brought together defenders of life with a wide range of backgrounds.

“We have over 100 people supporting the vigil here in Edinburgh, including some fantastic support from the Polish community in Scotland,” he said. “ It is a true international effort. We had participants from not only Scotland and England and Poland, but the USA, Italy, France, Hungary, Argentina, Nigeria, India and Sri Lanka.”

“In fact, over a two-week period, we’ve said the Rosary in English, Polish, Italian, Spanish, Tamil and Latin – often at the same time.” How about that for the international Catholic Church!”