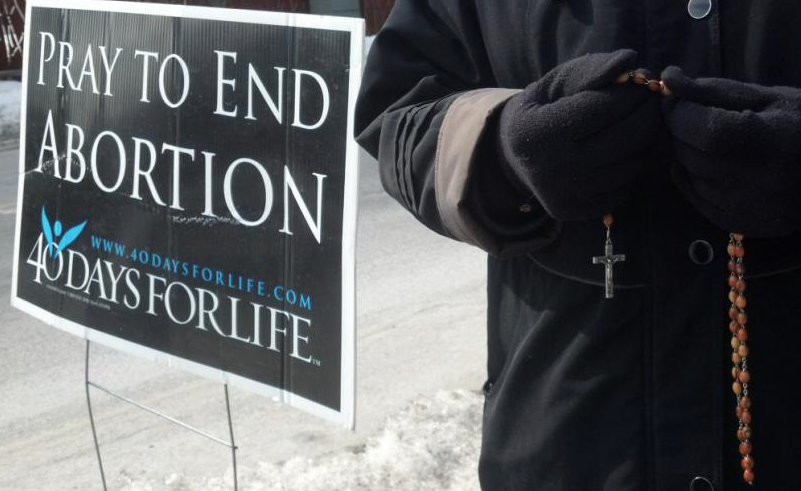 Robert Colquhoun, the London-based 40 Days for Life Director of International Campaigns, sees the next forty days as part of a wider spiritual battle against the evil of abortion. In the UK alone, he reckons 20-30 abortion-minded women choose life and reject abortion at the last moment on account of each campaign. He is adamant that all have a part to play in this ongoing battle: “No matter the number of abortions worldwide there is something that you can do personally and locally to change the culture where you live. … There are some lives that only you can save!”

Founded in 2004, today 40 Days for Life is an international pro-life advocacy group with approximately 750,000 volunteers.

Recently, Colquhoun spoke to LifeSite about the challenges now facing 40 Days for Life, especially in regard to the UK’s all-too-prevalent Culture of Death, and also about his personal motivation for continuing to campaign for the unborn.

LifeSite: Is the UK 40 Days for Life also taking part in the organization’s fall worldwide campaign? If so, what’s planned?

Colquhoun: This fall we have campaigns in 415 cities in 26 countries around the world, making it the biggest campaign we have ever conducted. We have never had so much interest internationally for the campaign. In the UK we have vigils in six cities and have just seen off a national buffer zone threat. Normally we see 20-30 abortion-minded women choose life and reject abortion at the last moment each campaign in the UK. The new book The Beginning of the End of Abortion: 40 Inspiring Stories of God Changing Hearts and Saving Lives has just been launched, and the movie, Unplanned will be released in the spring of 2019 during the spring 40 Days for Life campaign. There has never been a more exciting time.

When did 40 Days for Life come to the UK?

The first ever vigil was held in Belfast, Northern Ireland in 2009, and it first came to London in 2010, when we had 1,000 people participate in the first ever campaign in the capital, seeing reports of six babies saved from abortion, setting a new paradigm for grassroots pro-life activism. We were criticized, particularly for being “too American”, but truly it was a grassroots effort from the local volunteers.

What are the challenges you have found here as opposed to those in North America?

We have faced the hostility of a highly secularized culture along with apathy and indifference from churches. But we have overcome those challenges demonstrating the power of prayer in transforming lives on the local level and showing the efficacy of witness in the face of adversity. The decision to take a public stand really makes a difference.

What has been the reaction of other British pro-life groups to yet another one arriving here?

We have always focused on collaboration and co-operation with other groups, working closely with others who often are involved in more than one group. We have seen more unity in the pro-life movement in recent years despite the number of groups – trying to be a glue to bring people together. We have also seen new groups develop, such as the Alliance of Pro-Life Students and the March for Life. In the last 5 years, across all the pro-life organizations involved in prayer vigils on the local level, it has been estimated that 1,000 lives have been saved from abortion across the country. That is deeply encouraging.

What would you say has been 40 Days most effective impact to date in Britain?

The closure of BPAS Bedford Square abortuary after 3,000 hours of prayer outside was a landmark moment, particularly given the number of people who prayed outside fervently. The level of response that prayer vigils have generated has been truly extraordinary given their peaceful and prayerful nature. In the words of one BPAS employee [who worked at the Bedford Square facility], “Your prayers are obviously working because the girls are not keeping their appointments.”

Do you think 40 Days brings something unique to the global pro-life battle, and, in particular, to the fight here in the UK?

40 Days for Life brings the importance of prayer to the pro-life movement and an understanding that abortion can be fought also as a spiritual battle. It recognizes the power of the local community to bring change given that abortions happen on the local level. It is self evident that the response we have had in the UK means that peaceful, prayerful witness outside abortion centers is incredibly effective at saving lives and inspiring hearts and minds.

How did you come across 40 Days for Life? And what is your role in it?

I first came across 40 Days for Life in Canada praying for an hour outside the Morgentaler abortuary near the Canadian Parliament in Ottawa, during a year doing NET ministries youth missionary work. I was deeply struck by the countercultural witness and the importance of taking a public stance. When I came back to the UK I felt called to start a local campaign in central London to start a similar witness in the UK. Little did I know what I was in for!

What attracted you to 40 Days for Life?

I was drawn to the simplicity of the campaign, and also seeing the abortion debate as a spiritual battle. No matter the number of abortions worldwide there is something that you can do personally and locally to change the culture where you live. I think that local emphasis and the ability to change things where we live was deeply influential. There are some lives that only you can save!

In regard to life issues, how do you gauge the current state of affairs in the UK today?

In some ways things have never been worse. We are nearing 10 million abortions with no end in sight, combined with challenges of buffer zones and possible decriminalization. I have heard and seen the worst excesses of our abortion culture: women forced into abortions, abortion employees bullied and lied to, and aborted babies treated without dignity and respect. But in the midst of that darkness there is considerable hope: hearts and minds changing one person at a time, miracles on the local level, women praying for an angel to help at the last minute and their prayers being answered. Despite the despair, anger and hurt, there is still hope and help available in our culture. In that absence of hope, we go and place love.

The 40 Days strapline is “The Beginning of the End of Abortion.” Are you hopeful for the future?

I am in awe of what God can do in and through individuals faithful to His will. I’ve seen campaigns spread nationwide through faithful individuals: we now have 10 campaigns in Argentina. Latin America is booming for us. In the USA, there is hope for Supreme Court abortion laws being challenged, defunding of abortion providers while the Planned Parenthood brand is at an all time low, a new renaissance for the pro-life movement is possible. I’m full of hope. With God, all things are possible!