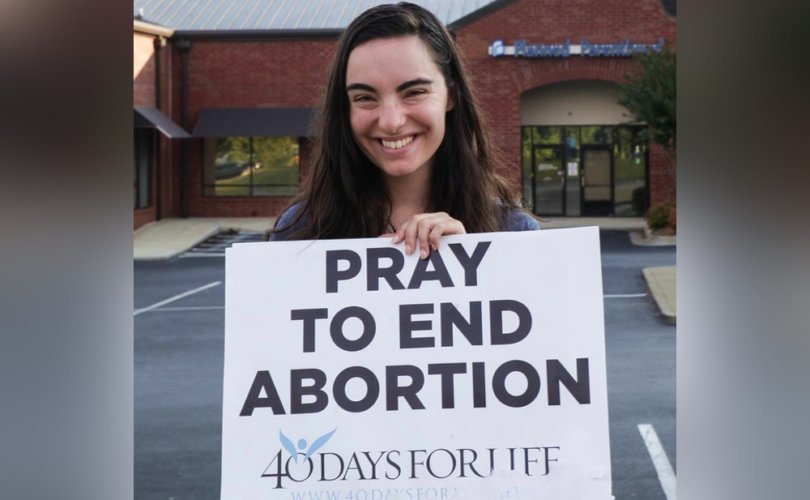 (LifeSiteNews) — Twice a year pro-life advocates organize outside of abortion facilities in more than 600 cities, across five continents, praying, fasting, and reaching out to promote life in their communities. Coined 40 Days for Life, the campaigns cover the fall and spring seasons, promoting life and yielding powerful results against the abortion industry.

Planned Parenthoods are closing and the grassroots movement is winning, said Shawn Carney, 40 Days for Life president, in the Decision Time video posted at the close of the fall campaign.

From lives saved to hearts converted, 40 Days is a stronghold in the grassroots movement. Since 2007, 20,368 lives have been saved, 114 abortion centers closed and 229 abortion workers have left their jobs in direct response to the campaigns. In addition, statistics show that as many as 75 percent of appointments are no-shows when advocates take to the sidewalks outside of Planned Parenthood. In the fall campaign alone, 850 lives were reported saved, 728 of those in the U.S. and Canada. Advocates also impact major business losses; up to 75 percent of women are deterred from Planned Parenthood appointments with the presence of pro-life participants in front of the building.

“The potential for a 75 percent no-show rate can really tip the scales, not just impact on the margins but they can put those abortion facilities under,” said Steve Karlen, North America campaigns director. “We have had [Planned Parenthood] staff members blame the campaign for closing us down and dropping their numbers.”

According to Karlen, participation is higher than ever.

“States becoming more pro-life in their policies and heartbeat bills … helps bring people in,” Karlen said. “We’ve seen more persecution, but that also brings a lot of people out to the sites. The Unplanned film brought out countless new volunteers that made us more diverse in faith traditions than before, increasing 40 Days to more than 1 million volunteers.”

The numbers are groundbreaking, but they don’t even begin to account for the many tertiary successes shared by those on the ground.

In Virginia, years of pro-abortion leadership have resulted in increased abortion accessibility in the state. Abortion is now legal until the third trimester of pregnancy, and as of October 1, can be accessed via telehealth through the remote prescribing of life-ending drugs. The parental consent law and partial-birth abortion ban are also at risk.

“Elections have consequences,” said Julie Klose, pro-life writer and activist. “When the Democrats took over the General Assembly in Virginia last year, they stripped away the mandatory ultrasound and 24-hour waiting period before a woman could have an abortion procedure. I can only speak for the (East End Richmond) pregnancy resource center I serve, but that 24-hour waiting period did more than save lives. It gave women and men a pause before they made a devastating choice that would affect the rest of their lives. Many of the women we serve do not want an abortion, but they think it is their only option. Just having 24 hours to counsel them, show them that ultrasound, and give them options to feel confident that they can parent their child is huge. One day can make a huge difference.”

Co-author of “She Found His Grace,” a post-abortion story, Klose has learned the power of shared stories and personal relationships in saving the unborn.

“Statistics and numbers are important, but relationships are the key to saving lives,” she said. “Sometimes abortion-minded women enter our doors and leave, deciding to choose life, but if we cannot connect with them again we have no way of knowing the final outcome. Then there are the mothers who call or visit the center, and we see that baby in their arms. Pregnancy resource centers do life-saving work, but the results are not necessarily on paper.”

Richmond advocates assisted a young woman sitting at a nearby bus stop, crying after leaving the Planned Parenthood facility. The young woman, a newly pregnant college student, accepted encouragement and prayers from the advocates.

Last year Constable engaged with a young woman who pulled up in front of the Richmond sidewalk advocates. She was able to direct her to a local Pregnancy Resource Center, sit with her and pray with her while she waited to be seen.

More than 80 people attended the final prayer vigil outside of Richmond’s North Hamilton Street Planned Parenthood the afternoon of Oct 31.

Constable is now working to make Richmond a 365 city.

“In 2020 we launched the 40 Days for Life 365 program in some of our biggest, most successful cities, to keep a year round presence, where an abortion [center] is never open without someone out there praying in front of it,” Karlen said. Sixty-four cities have been activated and Constable wants Richmond to be part of that number.

“After the Spring 2021 campaign I felt even more encouraged, and now had roughly 300 people that I was emailing regularly, so we started to promote 3 days a week of prayer,” Constable said. “We just kept praying and encouraging people to join us.”

Constable has also expanded church outreach, increasing interfaith support for the 40 Days mission in Richmond. More than 20 churches now sponsor full or partial days of prayer during the campaign.

“We would love for the Richmond Planned Parenthoods to go out of business, because no one goes there anymore,” Constable said. “But the churches are going to have to be ready to receive and welcome pregnant teenagers and single mothers into their hearts and congregations. Ultimately, our goal is not to make abortion illegal. Our goal is to make abortion unthinkable.”

In response to the high number of abortions, California is host to more campaigns than any other state. More than 50 campaigns were active this fall, centered around cities, but also present in outlying areas.

The Orange County Planned Parenthood in California is a high-traffic location, with advocates outside the facility three days a week for at least six hours year-round. Leaders witness the carnage of abortion on a regular basis; paramedics in ambulances enter the facility for emergency care for mothers and the disposal of the babies killed.

“Every Wednesday a rental truck comes to pick up the barrels of [remains],” said campaign leader Kristina Elliott.

When asked where the aborted are taken in California, the truck driver responded, “They are taken to a warehouse [and] then shipped off to another state where they are incinerated. Because they don’t allow ‘garbage’ to be incinerated in California.”

In spite of the many tragedies they witness, the advocates are encouraged by the number of women who return and share their decision to choose life, and the support of local church leaders.

Catholic clergy in Orange pray over the remains, and also over every worker as they enter the building, for a conversion of heart.

“The clergy are a huge blessing and make our campaigns stronger,” Elliott said. “When priests, deacons and pastors come out in their vestments, it speaks volumes. It’s a visible sign of love for the unborn and the need to protect all life.”

At the opening prayer vigil this fall, a mother came to share the life-saving impact of 40 Days for Life on her decision to not abort her baby, Elliott said. At the closing vigil, a similar story was shared.

“A mom stopped by and brought her newborn baby,” Elliott said. “She said that she told God it was the day she was going to thank the people she always saw outside of the clinic. Her father had recommended abortion, had told her to get rid of the baby, but she didn’t want to do that. Every time that she went to her monthly doctor appointment, when she was pregnant or alone, she would see those people praying.”

Local advocates are organizing a baby shower for another life saved, a baby born this past summer.

“Getting involved in my local 40 Days for Life campaign has changed my perspective on how to win the battle against abortion,” Klose said. “It starts in our hometowns. I appreciate national ministries and organizations whose mission is to change hearts and minds about abortion. We need people on all fronts, but the body of Christ can do so much locally. I might be idealistic in my prolife vision, but I see such impact at the local level.”

Gathering locally to support national change, advocates across the country are participating in vigils Nov. 30 and Dec. 1 in anticipation of the hearing of Dobbs v. Jackson Women’s Health Organization. Nearly 20 cities have officially registered to host, and can be located on the 40 Days website.