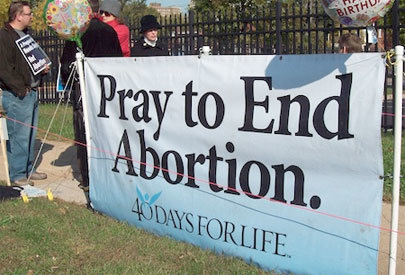 (LifeSiteNews) — The 40 Days for Life ministry launched its first post-Roe campaign today, continuing to fight for an end to abortion on the local level.

Nearly 20 years after the apostolate’s founding and following the historic Dobbs ruling that allows for laws on abortion to be decided at the state level, thousands of volunteers will participate in the international prayer, fasting and outreach effort to eliminate abortion one community at a time.

“We are excited that the first post-Roe 40 Days for Life campaign will be the largest ever in 622 cities,” president and CEO Shawn Carney told LifeSiteNews in a statement. “Despite losing some locations for the best reason, abortion facilities closing, we have added new cities and grown even more at the grassroots at a time when abortion is leaving Washington, D.C. and going to where the pro-life movement is the strongest, the local level.”

As the apostolate’s website states, “40 Days for Life is an internationally coordinated 40-day campaign that aims to end abortion locally through prayer and fasting, community outreach, and a peaceful all-day vigil in front of abortion businesses.”

The campaign consists of “individuals, churches, families, and groups” who “join together in prayer for a specific request so the entire Body of Christ can unite around a common focus.”

Participants “are also invited to fast” during the initiative as an act of repentance and in faith that God will provide healing in “our lives, our churches, our communities, our nation, and our world.”

40 Days for Life is characterized by its “non-stop, round-the-clock prayer vigil” for 40 consecutive days. Volunteers stand outside a local Planned Parenthood or abortion clinic, publicly praying that those considering abortion will choose life for their children.

“It is a peaceful and educational presence,” the website explains. “Those who are called to stand witness during this 24-hour-a-day presence send a powerful message to the community about the tragic reality of abortion. It also serves as a call to repentance for those who work at the abortion center and those who patronize the facility.”

The organization also encourages those who wish to volunteer but do not have an abortion clinic nearby to find “a different location which has some strategic significance,” such as a courthouse, city hall, or “highly visible intersection.”

Another aspect of the campaign is community outreach. This includes writing news stories and editorials, meeting with local church leaders and conducting a “door-to-door petition and education drive” in cities. The apostolate emphasizes the use of flyers, petition drives and table displays on college campuses. All this is done to ensure that “the message is taken proactively to every corner of your community.”

40 Days for Life began in 2004 when four young people in College Station, Texas were inspired by the idea of a 40-day prayer vigil to stop abortion procedures in local clinics. Three years later, the apostolate launched its first nationwide campaign. Today, it is an active movement across 64 countries.

Since 2007, 40 Days for Life reports that 22,031 babies have been saved from abortion through the presence of local volunteers across the world. Two hundred forty-two abortion workers have quit their jobs in the industry and 120 abortion clinics have closed.

More information and links to volunteer for local vigils can be found on the website.