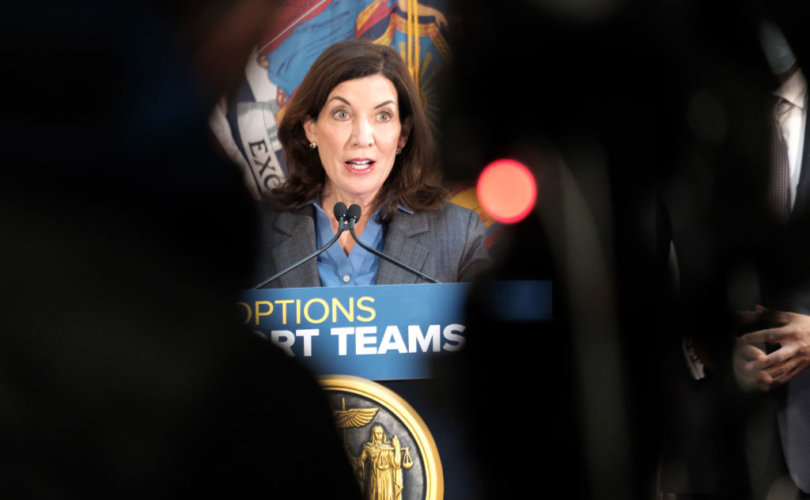 “We’re going to be asking all hospitals to break out for us how many people are being hospitalized because of COVID symptoms [and] how many people … happen to be testing positive, just while they’re in there for other treatments,” Hochul said on January 3.

“I have always wondered … is that person in the hospital because of COVID? Or did they show up there and are routinely tested and showing positive and they may have been asymptomatic or even just had the sniffles?” Hochul said.

The first round of data from hospitals showed that 42% of COVID hospitalizations are actually due to another reason. She shared the statistics at a press conference on January 7.

She also asked New Yorkers not to worry about the omicron variant unless they have severe conditions, noting that some were clogging up emergency rooms over minor symptoms.

“I know you’re anxious, I really understand this, but if you’re an adult with very minor symptoms you can handle the runny nose,” she said. “You can handle the throat being a little sore, a little bit of cough. Just treat it as you would a flu. Follow the protocols. Please don’t overburden our emergency rooms. They have so much work to do.”

Though omicron generally presents mild symptoms, as she noted, Hochul has continued to support jab requirements.

She expanded the state’s healthcare worker mandate, which prohibits religious exemptions, to include a booster shot requirement.

Hochul announced the ongoing mandate on the same day she told adults not to worry about the minor symptoms associated with omicron.

Her administration also required all college students to get a booster shot as a condition of staying enrolled.

“We are asking all schools to ensure students, before they return, are boosted. They are required to be vaccinated. Now we are putting on an additional requirement — in order to return to your college campus, you have to be boosted,” Hochul said on December 31.

The mandate is still in effect, despite the emerging information about the mild symptoms associated with the new COVID variant.

She has been a major supporter of the jabs, even claiming that “God wants” people to take the abortion-tainted shots.

“I need you to be my apostles,” Hochul, who is Catholic, told attendees at a September event at the Christian Cultural Center. “I need you to go out and talk about it and say, ‘We owe this to each other. We love each other.”

Hochul said people who have not taken the COVID shots “aren’t listening to God and what God wants.”

“I prayed a lot to God during this time,” she said.

A week prior she publicly invited Texas residents to come to New York to have abortions.