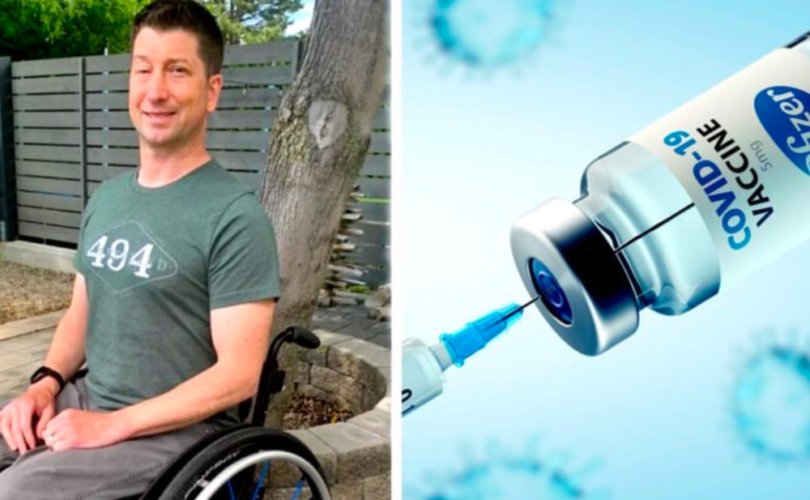 (Children’s Health Defense) – More than 11 months after becoming paralyzed from the waist down 12 days after getting his second dose of a Pfizer-BioNTech COVID-19 vaccine, Julian Scholefield is waiting for the Canadian government’s decision on his request for compensation.

“I’m paralyzed now, not because of a reckless accident, but because I followed the guidelines of our government, and so that validation and recognition is definitely something that would mean a lot to me,” Scholefield told CBC News.

Scholefield, a 45-year-old in British Columbia, was diagnosed with acute disseminated encephalomyelitis (ADEM), a rare neurological disorder that causes inflammation of the brain and spinal cord that damages myelin — the protective covering of nerve fibers.

“My life has become a daily struggle and my wife and children must provide care and assistance for me,” Scholefield said.

According to the Canadian government, there have been 46,149 reports of adverse reactions to COVID-19 vaccines. Only a handful of Canadians who reported being injured have received compensation.

‘Within a two-hour period, I ended up paralyzed’

Scholefield first noticed a tingling sensation in his leg on July 25, 2021, while he and his family were boating on Okanagan Lake.

“Rather than getting better, it actually progressed worse and went from being just in the left leg to the right leg as well,” Scholefield told CBC News on June 22.

“Within a two-hour period, I ended up paralyzed from really the mid-section down.”

A neurologist later diagnosed him with a myelitic form of ADEM, which can lead to paralysis, vision loss and difficulty coordinating voluntary muscle movements, according to the National Institutes of Health.

READ: Dr. Robert Malone: COVID measures have been ‘politicized and weaponized’ against US citizens

The condition is known to sometimes occur upon COVID-19 vaccination, according to this 2021 case report on an unidentified 56-year-old female patient who developed the condition two weeks after receiving the Pfizer vaccine.

Ignored and ‘swept under the rug’

Scholefield told CBC News that provincial and federal government officials have not responded to his emails and letters explaining his case.

“To be ignored and feel like you are swept under the rug is really hard, especially after going through something like this,” he said.

“That’s why I think it is [important] to get recognized by the Vaccine Injury Support Program [VISP] that this happened, and this happened to me because of the vaccine,” he said.

In October 2021, Scholefield submitted a claim to the VISP, the Canadian government’s vaccine injury compensation program.

— Article continues below Petition —
PETITION: Trudeau must apologize for "mass grave" smear that led to church-burnings
Show Petition Text
4354 have signed the petition.
Let's get to 5000!
Thank you for signing this petition!
Add your signature:
Show Petition Text

He said he is on medical leave from work to concentrate on his recovery, which currently involves chemotherapy treatments aimed at resetting his immune system, and acupuncture and treatments from a naturopath and osteopath.

He said his family has incurred significant expenses since the injury, including the cost of his wheelchair and the installation of an elevator in his home so he can get from his ground floor entrance to his living space and bedroom.

Scholefield is one of 774 people who have filed a claim to the VISP.

So far, the VISP medical review board has approved eight claims as having a probable link between a serious and permanent injury and a vaccine, including the case of a 40-year-old man diagnosed with Guillain-Barré Syndrome who was awarded financial compensation last month for suffering and loss of employment income.

The Public Health Agency of Canada established VISP in July 2021 to provide financial support to people found to have experienced a serious and permanent injury as a result of receiving a Health Canada-authorized vaccine.

Prior to July 2021, the Canadian government was the only G7 country that did not have a vaccine injury compensation program.

More than 11.9 million doses of the COVID-19 vaccines have been administered in British Columbia as of June 21, according to the Canadian government’s COVID-19 Tracker.

Neurological side effects of COVID vaccinations a ‘safety concern’

From the initial search results of the period December 2020–September 2021, the author collected 28 “original articles which convincingly reported a neurological adverse reaction.”

Included in the 28 studies was a September 2021 study documenting a patient who developed ADEM two weeks after receiving the first dose of the Pfizer-BioNTech (Comirnaty) COVID-19 vaccine, and another study, published July 2021, that reported three patients were diagnosed with encephalitis after receiving AstraZeneca vaccine.

“Healthcare professionals, particularly neurologists involved in the management of patients having undergone SARS-CoV-2 vaccinations, should be aware of these side effects and should stay vigilant to recognize them early and treat them adequately,” Finsterer wrote.

They are not at all specific to the COVID vaccine. This is something that we’ve identified as a serious but very rare complication of pretty well all vaccines.

According to the BC Centre for Disease Control (BCCDC), the onset of ADEM can occur up to six weeks following COVID-19 vaccination.

CBC News reached out to BCCDC for data on how many people have been diagnosed with ADEM following a COVID-19 vaccine, but the agency did not respond, CBC News said on Wednesday.

According to the U.S. government-run Vaccine Adverse Event Reporting System, or VAERS, there have been 213 reports of ADEM following COVID-19 vaccines, with 155 of those reported after the Pfizer vaccine, 45 after Moderna’s vaccine and 12 after the Johnson & Johnson vaccine.

1
Canadian doctor sounds alarm over 13 ‘sudden’ deaths among physicians since COVID jab rollout
2
After raid heard ’round the world, the choice is between Constitutionalism and de facto Communism
3
Cdl. Burke warns of ‘advancing apostasy’ in the Church during Latin Mass homily
4
The jabbed aren’t just unprotected against COVID, they’re also suffering the most
5
Marjorie Taylor Greene warns ‘working families’ will be worst hit by massive Democrat tax hikes
Subscribe to Daily Headlines »