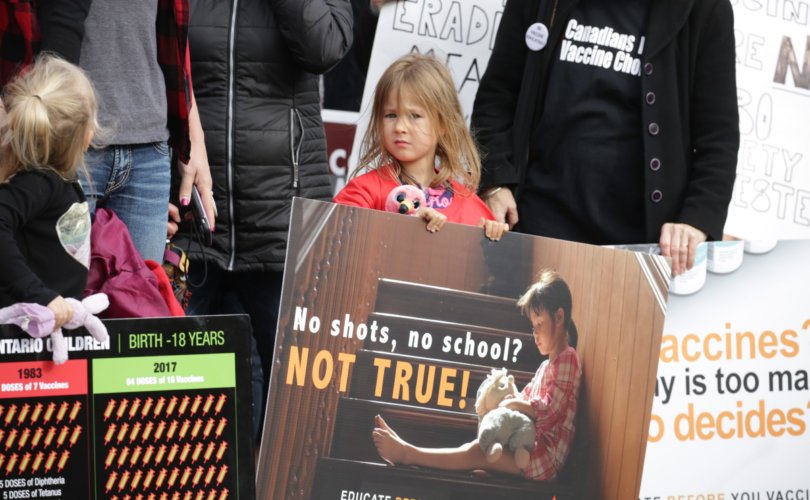 TORONTO, November 1, 2019 (LifeSiteNews) — Five mothers along with the non-profit group Vaccine Choice Canada are taking the government of Ontario to court over its mandatory law that requires children to be vaccinated in order to attend school.

The group claims the province’s Immunization of School Pupils Act violates several Charter rights, including freedom of conscience and religion, liberty and security of the person, and informed medical consent.

“This decision is not the state’s to make, on a blitz basis, but on a case-by-case basis with respect to the health, circumstances and propensities and predisposition of the child by the parent with medical consultation.”

The release blasted the Conservative government for being “a peddler for the corporate interests of the $60 billion vaccine industry, predicted to reach $100 billion by 2020, without regard to the particular health and needs of the individual child.”

Ontario’s law mandates that all school children be vaccinated against certain diseases, such as diphtheria, tetanus, polio, measles, mumps, rubella, etc. Parents or guardians must provide immunization records for children attending publicly funded schools. A student’s incomplete immunization records can result in suspension from school. Parents are permitted to get an exemption for medical reasons or because of their beliefs. In the latter case, parents must sign a “statement of conscience or religious belief” and attend an “education/information” session.

If parents do not comply, a medical officer of health can order their children suspended from school and/or barred from registering, enrolling or attending school, and the parents can be charged.

Only New Brunswick has similar legislation.

The statement of claim argues that the law violates the plaintiffs’ right to freedom of conscience, belief, religion and thought guaranteed under the Charter’s Section 2(a) and (b), and their rights to liberty and security of the person guaranteed under Section 7.

Moreover, the law exposes parents to potential criminal liability because the statement of conscience and belief they must sign includes an acknowledgement that “delaying vaccines” will put their child’s “health and even life at risk.”

Being forced under oath to sign this statement, which they disagree with and for which there is no conclusive proof, violates the plaintiffs’ right against compelled speech as guaranteed by Charter Section 2(b), the statement of claim asserts.

As well as challenging the law as unconstitutional, the plaintiffs want the court to declare the province’s “mature minor doctrine,” which allows children of no specific age who are deemed competent to make medical decisions without parents’ knowledge or consent, not apply to vaccinations.

The plaintiffs allege in the statement of claim that in their experience the compulsory “education information” sessions “are designed to browbeat” students and parents into accepting vaccination “under threat of expulsion” and “present a one-sided distorted view of vaccination” that omits information on the risks of vaccination.

They say “it is undisputed” that those risks, to a certain percentage of those vaccinated, include severe, permanent injuries such as physical, neurological, speech and other disabilities, and death — risks detailed in the warnings inserted by the vaccines’ manufacturers.

School and medical health officers “completely ignore” these dangers, do not discuss them with parents or students, or pre-screen students for “potential propensity to be injured by vaccines” before lining students up at school for vaccinations.

The statement of claim asserts that Canada is the only G-7 country with no national program to compensate those killed or injured by vaccines; that the United States has paid out more than $4.1 billion in compensation for vaccine injury since 1989; that the U.S. government “has acknowledged that vaccination can cause brain damage resulting in symptoms of autism in genetically susceptible children;” and that vaccines “include ingredients that are classified as poisons, carcinogens, toxins, neurotoxins, immune-and-nervous-system disruptors, allergens, fertility inhibitors, and sterilizing agents.”

The plaintiffs argue that “herd immunity” is a theory and not a fact, that there is “no conclusive proof that not vaccinating a child, per se, will bring harm to that child or other children or others around him/her,” and that Health Canada acknowledges the Charter prevents mandatory vaccination.

Moreover, they allege that the “mature minor doctrine” allows public health officials “prey on the vulnerability of children in order to impose their own preferences and agenda.” These officials have “free rein” to conduct in-school vaccination clinics “without oversight, frequently coercing and bullying underage children to submit to vaccinations.”

Children as young as age 11 have been “persuaded” to vaccinate without their parents consent “under duress of being suspended if they do not comply.”

They claim that there is “zero accountability for violation of rights by the medical officer of health” and as a result there are “many cases” of public health officials “unlawfully suspending young children for 60 to 90 school days” rather than the 20 days’ suspension set out in the law.