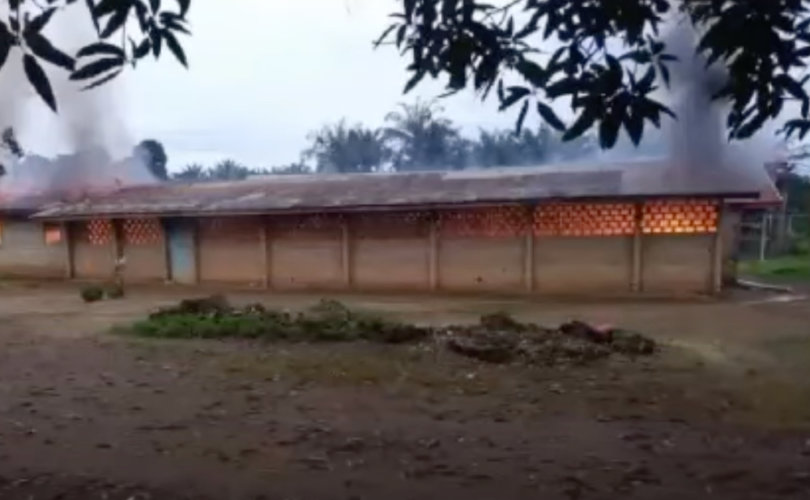 St. Mary’s church in the village of Nchang engulfed in flames.Screenshot/YouTube

NCHANG, Cameroon (LifeSiteNews) – Nine Catholics, including five priests and a nun, have been kidnapped after the burning of a church by dozens of gunmen in the south-west Cameroonian diocese of Mamfe.

Friday’s attack on St. Mary’s church in the village of Nchang is thought to have been carried out by anglophone separatists who unsuccessfully tried to secede from French-speaking Cameroon in 2017.

The nine kidnapping victims are likely being held for a ransom by their captors, while their location remains unknown.

A cook, a catechist and a teenager were kidnapped along with one nun and five priests during the attack on the Catholic church.

The Bishops of the Bamenda Provincial Episcopal Conference confirmed on Sunday that the church was “burned by unknown armed men” and that “no concrete reason” for the attack has been established.

“It was with great shock and utter horror that we, the Bishops (of the BAPEC) learnt of the burning down of the St Mary’s Catholic Church, Nchang… and the kidnapping of five priests, one religious sister and two (now reported to be three) lay faithful by unknown gunmen,” the bishops’ statement said.

“This act was completely unprecedented and, as of now, no concrete reason has been given for this heinous act against the house of God and the messengers of God.

The bishops, who claimed some of the perpetrators had previously benefitted from the church’s charity, insisted the gunmen had “crossed the red line” and should repent, as “no one ever fights against God and wins.”

They also vowed to pray “for the forgiveness of the guilty, as did Christ who prayed on the cross: Father, forgive them, for they know not what they are doing.”

Cameroon News Agency (CNA) reports that the church was attacked because the priests, two of whom are Nigerian, did not support the separatists and wanted to operate schools in the village.

Mamfe’s Bishop Aloysius Fondong Abangalo attended the scene quickly after the attack, taking away the Blessed Sacrament from the tabernacle, as much of the church smoldered in ashes.

CNA noted that the bishop was enraged by the attack and declared it an “abomination.”

“What has happened is an abomination. Put simply, God has been made to understand that we do not want him in our country…the Catholic Church will not come to Nchang again,” Bishop Abangalo reportedly said.

“You people (the local population) should pray for peace,” he added.

Fides News Agency reports that Bishop Abangalo also called the diocese of Mamfe to pray the Rosary of Reparation throughout October “for this act of abomination committed in our country.”

Over 6,000 Cameroonians have been killed and one million displaced in the ongoing violence between English-speaking rebels in the west and government forces representing the French-speaking majority.

The anglophone separatists tried to establish an independent state in 2017, known as the “Federal Republic of Ambazonia” but failed to take control of the western region.

#Cameroon – Call for prayers for members of the Catholic Church abducted Friday in the western part of the country, in Nchang, Bamenda province. The attackers also set fire to St. Mary’s Church in the same locality. This attack is believed to be linked to the Ambazonia boys. 🙏 pic.twitter.com/baXC5DNDIP