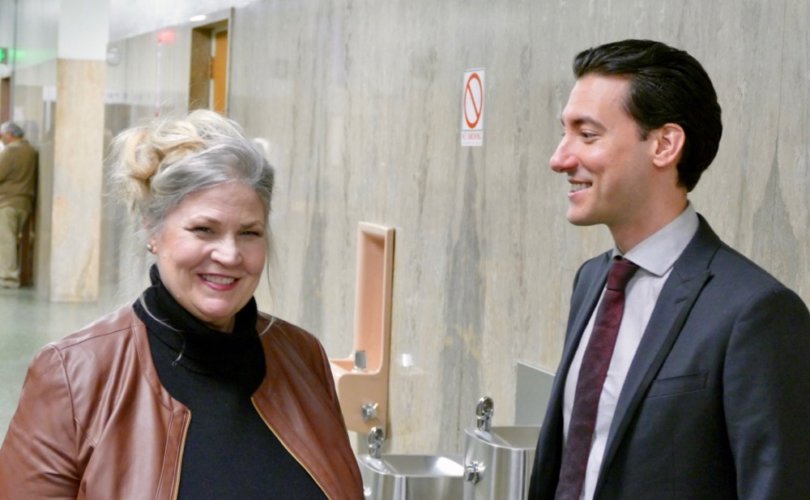 SAN FRANCISCO, California, October 10, 2019 (LifeSiteNews) — Almost four years in the making, the Planned Parenthood Federation of America vs. Center for Medical Progress lawsuit pits those who practice, advocate for, and profit from unthinkably cruel and barbaric acts on the tiniest of humans against a few individuals who had the tenacity, courage, resourcefulness, and faith to walk into the heart of darkness to expose trafficking in the brains, hearts, livers, lungs, and limbs of pre-born babies.

The significance of the case cannot be overestimated.

It’s a massive legal battle in which abortion giant Planned Parenthood claims those who say they were gathering evidence of violent crimes were actually engaged in a criminal conspiracy against it.

In preparation, at least 10 lawyers for the plaintiffs and 13 for the defense have spent hundreds of hours producing thousands of pages of documents, deposing witnesses, and racking up legal bills in the millions of dollars.

The final result now depends on 12 jurors in the U.S. district courthouse and what they will make of the evidence put before them during the trial, which began October 2 and will continue until at least November 8.

Here are five things to know about the biggest pro-life trial in decades as it gets underway:

1) What it’s really about: This lawsuit is Planned Parenthood’s desperate attempt to permanently discredit the undercover videos the Center for Medical Progress (CMP) released in 2015 that exposed its part in trafficking baby body parts. The casual brutality of abortionists discussing crushing unborn babies and haggling over the price of fetal organs shocked the world and Planned Parenthood wants to convey that those who exposed them – not their giant abortion corporation – are in the wrong.

It’s also a retaliatory action: Planned Parenthood wants to to crush the pro-life advocates who went undercover and exposed them. The plaintiffs allege CMP’s project lead David Daleiden, undercover journalists Sandra Merritt and Geraldo Adrian Lopez, and founding board members Troy Newman and Albin Rhomberg, committed 15 crimes while carrying out the undercover video project, ranging from breach of contract to racketeering. They claim CMP is liable for paying for everything Planned Parenthood’s personnel bought, such as security upgrades and staff counselling hotlines, after they realized they’d been recorded.

But one thing Planned Parenthood is not claiming is defamation, because that would require it produce all the evidence it has for that claim during the discovery phase of the case, prior to trial. Since, in fact, the CMP videos are not defamation, evidence of Planned Parenthood’s fetal tissue harvesting practices and pricing is not something it wants aired publicly.

2) Who the defendants are: Daleiden, 30, developed and ran the undercover sting operation and is the high-profile, public face of CMP. Newman, a veteran pro-life activist, is well-known as the president of Operation Rescue. Merritt, 66, a grandmother who ran a home business and was a part-time teacher, is familiar as co-defendant with Daleiden in an ongoing California state criminal prosecution. Lopez, 28, is employed by the Navy as a hospital corpsman in an intensive care neonatal unit, and got involved in the undercover operation after Daleiden met him when he worked at Starbucks and hired him to transcribe the videos. Rhomberg is a longtime pro-life advocate and investigator who did graduate studies in high-energy particle physics, taught physics at the University of Wisconsin, and worked in the space program at Caltech Jet Propulsion Laboratory and at the Johnson Space Flight Center in Texas: in other words, he’s a rocket scientist.

3) It’s a jury trial in San Francisco: Planned Parenthood brought its case in San Francisco, the most liberal district in the country. The nine men and three women selected after a closed door one-on-one with Judge William Orrick will make their conclusions based only on what they hear and see in the courtroom. In a jury trial, plaintiffs and defendants may pursue a line of questioning that lets jurors hear testimony that is ultimately stricken but could still influence their judgement, or bring up points that have little legal merit but might affect the jury emotionally. Significantly, Orrick isn’t letting the jury hear the audio from any of the undercover videos at the center of the case. The judge thinks the conversation in the videos, which record Planned Parenthood staff talking about harvesting baby body parts, would be “prejudicial.” In other words, if the jurors could hear what was being discussed in the videos, they might be so disgusted with Planned Parenthood that they would no longer be able to be impartial.

The defense is arguing that the audio is critical to their case. First, the content of the conversations corroborates their claim that they believed Planned Parenthood staff were committing violent crimes against people. More importantly, the audio conveys better than the video the un-confidential nature of the conversations. Seeking to uncover evidence of violent crimes against people is an exception to California’s law against recording without consent, and, if conversations are not confidential, there is no consent requirement.

There’s a chance that Orrick’s censorship could sway the jury toward the defense since they can see that the defense wants the videos shown while Planned Parenthood wants to talk about how awful they are but not show them.

4) The judge is biased and should have disqualified himself: It’s only the early days of the trial but Orrick’s conduct already vindicates the defense’s 2018 petition to the Ninth Circuit Court to have him disqualified, after he refused to disqualify himself at their request. His ties to Planned Parenthood are well-known (Orrick was on the board of a charitable institution that houses a Planned Parenthood abortion center) and his deferring to Planned Parenthood has led to daily early-morning battles between him and the defense lawyers before the jurors enter the courtroom.

Orrick has decreed that abortion and fetal tissue procurement are not relevant to the trial, his rulings fluctuate, and he arbitrarily imposed what he admitted were not federal rules but “the Orrick Rules,” which prohibit witnesses from speaking to their lawyers for all the time they are under oath. The defense team claims this impinges on their clients’ Sixth Amendment right to effective representation of counsel and lawyer/client privilege.

5) The defense lawyers are the unsung heroes: There are 13 lawyers from four law firms and four pro-life legal associations representing among them the five individual defendants, as well as CMP and its alter-ego BioMax. Almost all are away from their homes and their families to work exhausting hours over six weeks to put on a case within the frustrating constraints Orrick has imposed. They also must negotiate the conflicting priorities within their own team as required by their specific clients. Yet they all demonstrate a high degree of competence, graciousness, and a determination to win despite the odds.