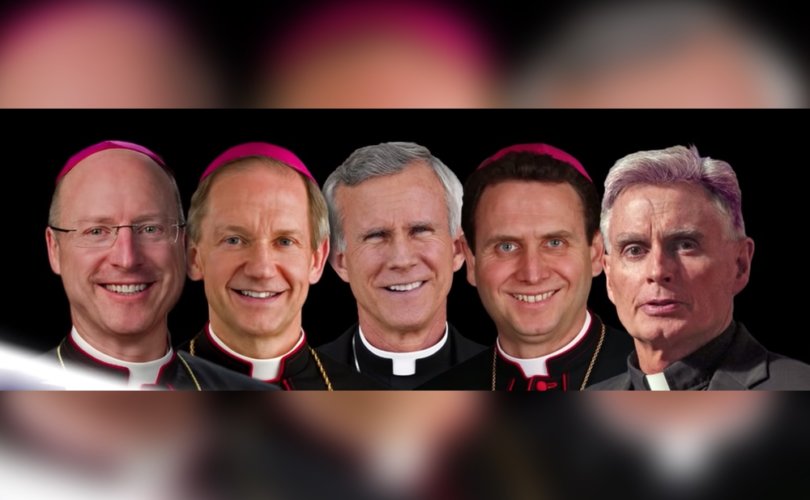 The Vatican kibosh of the U.S. bishops’ attempt to vote on two measures addressing sexual abuse and a failed motion at the meeting to request the Vatican release the documents on Archbishop Theodore McCarrick kept anger kindled among Catholics eager to see Church leadership in the U.S. authentically address clerical sex abuse.

And while many bishops talked about action, some took discussion time to fixate on what the difference may be between abuse of minors and consensual sex involving adults. Still others urged leaving it to the Vatican to address the abuse crisis. Five prelates, however, ran counter to the meeting’s perceived futility with their interventions.

They brought to the floor the importance of being shepherds to their people, fraternal correction among bishops, involving laity in addressing the abuse, and having appropriate regard for the Church’s moral teaching on sexuality.

The interventions were the subject of a video montage produced by the laity-run site Complicit Clergy titled “A Few Good Men.”

Among the video highlights was Springfield, Illinois Bishop Thomas Paprocki quoting Lumen Gentium #27, to illustrate that bishops are vicars of Christ and not branch managers of the Vatican.

“In that regard I think we do have a responsibility to take care of our sheep,” Bishop Paprocki said. “Our Holy Father has called us to accompany our sheep. Our people are crying out for some action.”

Bishop Andrew Cozzens, auxiliary bishop of St. Paul and Minneapolis, said he dreamed of a day when a bishop facing accusations such as McCarrick would approach the bishops of his region and ask their thoughts on whether he should resign for the good of the Church.

This would have helped a great deal in a very difficult situation in his own diocese, the bishop said.

Bishops Cozzens continued, saying he also dreams of a day “when we as brothers are strong enough to say to another brother in our region, ‘We think you should resign,’ even if he’s not ready to hear that. ‘We think that in fact these things are serious enough that you should resign.’”

Spokane Bishop Thomas Daly questioned if the sex abuse as it has been revealed of late had come to be “because we have certain bishops or priests who don’t see anything wrong with consensual sex between adults?”

“It might be that they themselves were compromised,” he said. “Others, ambitious clerics on the ecclesiastical escalator doing everything to contain things and not saying anything, and then moving up the ladder.”

Bishop Daly expressed concern for parents of faith-filled families who had encouraged their sons and daughters to priestly and religious vocations.

“And again these are faith-fill parents that are committed to the Church, that are very understanding and patient,” the Spokane bishop stated. “But my feeling is judging from their conversations, they’re running out of patience.”

Jefferson City Bishop Shawn McKnight stressed “the necessity of the laity in helping us get out of this mess.”

“I think we all believe that,” he said. “We all talk about it, but unfortunately in concrete structures we don’t actually do it.”

Bishop McKnight echoed the thought voiced earlier in the meeting by St. Paul and Minneapolis Archbishop Bernard Hebda in a homily “that we need to study the root causes of the abuse of power by U.S. hierarchy.”

‘Do we believe the doctrine of the Church or not?’

“It’s part of our deposit of faith that we believe homosexual activity is immoral,” he said.

“The people, those that we label homosexual, are children of God, and they need our great care,” Bishop Strickland continued. “But to me that real care comes from acknowledging the sin, and the reality that all of us are sinners called from sin to virtue.”

The question with the McCarrick situation is how the now-disgraced prelate got promoted, the bishop added, “and how did all that happen, if we really all are of one mind that this is wrong and sinful?”

“There seem to be questions about that and I think we have to face that directly,” he said. “Do we believe the doctrine of the Church or not?”

The Tyler, Texas bishop then evoked Jesuit Father James Martin, known for promoting an LGBT-affirming message wherever he goes.

“There’s a priest that travels around now, basically saying he doesn’t [believe the doctrine of the Church],” said Bishop Strickland. “And he seems to be very well promoted in various places.”

Fraternal correction, he said, means asking, “Can that be presented in our diocese? That same-sex marriage is just fine, and the Church will one day grow to understand that?”

“That’s not what we teach,” he stated. “And I think we really have to ask those serious questions.”

The Complicit Clergy website was established by lay Catholics on the premise that “a laity-led initiative was required to cleanse the Church and establish a culture of accountability.”