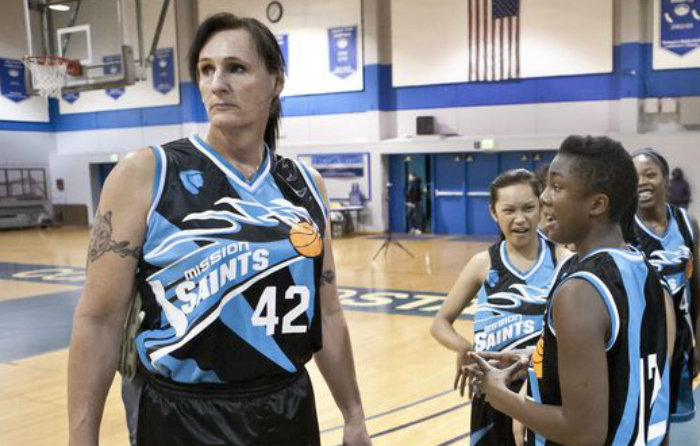 SAN PABLO, CA, December 10, 2012, (LifeSiteNews.com) – Gabrielle Ludwig is not like any other woman on the basketball courts, or in the locker rooms, in Santa Clara Community College’s junior team. Gabrielle is a foot taller than every other player and has significantly more upper body strength.

That’s because the 50-year-old player was born Robert John Ludwig, a man. He still bears the tattoos of his service in Operation Desert Storm.

This turn at college basketball is his second. His first stint in 1980 was as a man at Nassau Community College.

After his sex change operation this summer he petitioned to change his birth certificate’s sex from male to female.

That edit allowed his previous sports history to be wiped off his record. Ludwig is now eligible to play for two full years.

Even at twice his opponents’ age, Ludwig cuts an imposing figure at 6’8” and 220 pounds, a fact not lost on his coach – or his much smaller opponents.

Ludwig’s coach, Corey Cafferata, told the Mercury News in time the vet “will be the most dangerous player in the state.”

Some of the sport’s regulators minimize the physical advantage that competing against women gives Ludwig.

Central Valley Conference, Commissioner Logan McKechnie said, while Luwdig is tall, his state certification as a female is all that matters. “I don’t think, frankly, fairness enters into it,” he said.

Another commissioner, Dale Murray of the Coast Conference, believes Ludwig is evenly matched with his competitors and “just happens to be a bit taller than everyone else.”

Others question whether a player with Ludwig’s attributes belong in an all-female sport.

One of the people Ludwig faced off against in a recent game described his style as “real physical.”

The issue of transgender athletes sharing showers and locker room changing areas remains a point of contention wherever the question arises.

Parents complained upon learning a 45-year-old transgender man, who still had male genitalia, lounged naked in the women’s sauna at Evergreen State College in Washington State. The locker room was frequented by girls as young as six.

But homosexual activists claim biology does not determine sex, and it should not determine which locker rooms or restrooms people use.

In October 2010, the National Center for Lesbian Rights released a series of proposed guidelines for how schools and coaches should deal with transgender athletes.

“Transgender student athletes should be able to use the locker room, shower, and toilet facilities in accordance with the student’s gender identity,” the report stated.

Transgender people should also be allowed to share hotel rooms with members of the opposite sex, it stated.

“Transgender student athletes generally should be assigned to share hotel rooms based on their gender identity, with a recognition that any student who needs extra privacy should be accommodated whenever possible.”

They recommend any employee who refuses to comply with these regulations should be subject to discipline, “up to and including discharge or expulsion from the school,” and that failure to implement such policies “puts schools, athletic conferences, and sport governing organizations at risk of costly discrimination lawsuits and negative media attention.”

The NCAA adopted a standard policy in 2011 stating that a male-to-female transgender athlete may not compete on a female team “until completing one calendar year of documented testosterone-suppression treatment.”