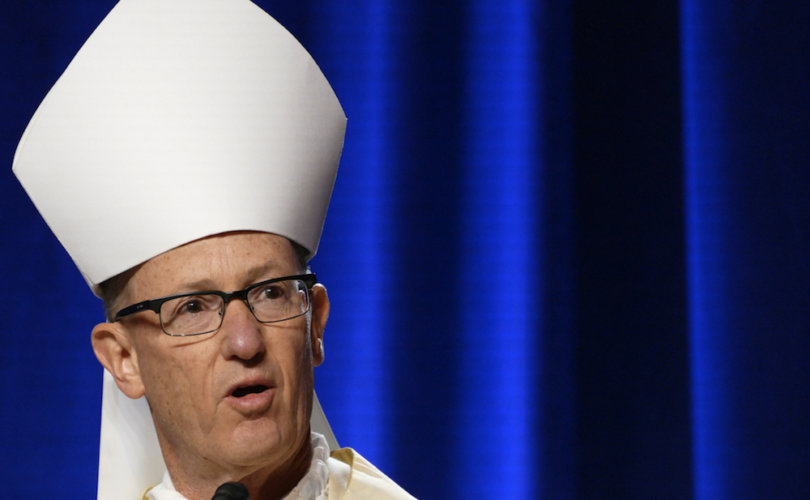 DENVER, Colorado, July 26, 2017 (LifeSiteNews) – On the occasion of the 50th anniversary of the Land O’Lakes statement on Catholic education, Lincoln Bishop James Conley likened the controversial declaration to the ultimate rejection of God.

Bishop Conley described the statement as the “the ‘non serviam’ moment of many of America’s Catholic universities.”

“Non serviam,” a Latin phrase for “I shall not serve,” is typically attributed to Lucifer’s Old Testament words expressing his rejection of serving God. The prophet Jeremiah also used it to describe the Hebrew people’s disobedience to God.

“The Land O’Lakes statement proposed to redefine the mission of the Catholic university,” Bishop Conley said. “It rejected the authority of the Church, and of her doctrinal teaching.”

“It rejected the idea that faith and reason work best in communion with one another,” he continued. “It prioritized the standards and culture of secular universities over the authentic mission of Catholic education. It was a statement of self-importance, and self-assertion.”

This self-importance “defies an authentically Catholic view of education,” he said.

The statement “declared that Catholic universities would become independent from the hierarchy of the Church, from any obligation to orthodoxy, and from the authentic spirituality of the Church,” the bishop went on to say.

Speaking July 5 to teachers and principals at the Regional Catholic Classical Schools Conference at the Institute for Catholic Liberal Education in Denver, Bishop Conley said, “Fifty years ago, a ‘declaration of independence’ in Catholic education transformed the Church.”

The document came from some 26 presidents and administrators from 10 institutions who convened at a retreat center in Land O’Lakes, Wisconsin, for the North American summit for the International Federation of Catholic Universities. Holy Cross Father Theodore Hesburgh, Notre Dame’s president and head of the federation at the time, had summoned the attendees.

The meeting’s purpose was to establish a vision for Catholic higher education in the wake of Vatican II. The “Statement on the Nature of the Contemporary Catholic University” was signed July 23, 1967.

It is considered by many to have devastated Catholic education because of the ensuing loss of Catholic identity in Catholic colleges and universities. Bishop Conley spoke about the ripple effects on the U.S. church.

“Land O’Lakes sought to make many parts of the Catholic university indistinguishable from secular counterparts,” Bishop Conley said. “And that has impacted the entire Church in the United States.”

In the 50 years since the statement, he said, secularization in Catholic universities has caused secularization in many Catholic elementary and high schools. There are textbooks that don’t reflect Catholic perspectives and, he said, “teachers who have, regrettably, not been trained to think or teach from the heart and wisdom of the Church.”

“An entire generation of bishops, priests, religious, and lay Catholics — myself included — were formed in the wake of Land O’Lakes,” stated Bishop Conley. “And we formed another generation, which now forms another, all of us doing the best we can, but regrettably, without being exposed to much of truth, goodness, and beauty of the Church’s tradition.”

He cited the drop of Catholic school attendance from more than five million in the early 1960s to just over two million today, saying the decline of the Catholic university “has a great deal to do with the diminished place of Catholic education in the United States.”

The bishop warned against the temptation to measure credibility, effectiveness, impact, and importance of Catholic universities according to the standards of the world — a temptation from which he said the statement was borne.

The statement is also a reminder of the importance of humility, docility, wonder, and receptivity in education, he told the educators. He expressed hope that their embrace of these and their dependence on the grace of God would transform schools and the Church.

Bishop Conley emphasized that the statement is a reminder of how much education impacts our culture and pointed out that this works both ways.

“If dissenting universities, actively distancing themselves from Catholic identity, can have an impact that profound on Catholic and civic culture,” he said, “then faithful schools, alive in the best traditions and wisdom of the Church, and dedicated to the formation of disciples, can be an unparalleled instrument for the revitalization of Catholic culture.”