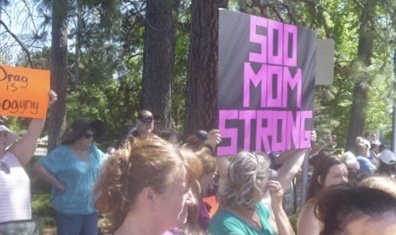 SPOKANE, Washington, June 19, 2019 (LifeSiteNews) ― A group of mothers and their allies have taken to the streets to show their opposition to Drag Queen Story Hour.

500 Mom Strong and its male allies rallied outside the Spokane South Hill Public Library on Saturday, June 15. The afternoon event, which attracted more than 200 supporters, took place on the opposite side of the street from the library. It featured several church groups, music, police, snipers, and the arrest of a Christian pastor.

Pastor Afhsin Yaghtin of New Covenant Baptist Church argued with police about having to remain at a distance from the library. Hundreds of supporters of Drag Queen Story Hour (DQSH) held a counter-rally beside the public facility.

The protest was filmed by Alex Barron of the traditionalist Catholic Charles Carroll Society.

500 Mom Strong is a group founded over Facebook by Anna Bohach, a woman who believes that library drag queen events are both misogynist and attempts to sexualize children.

Bohach began the group when she discovered that the Spokane South Hill Branch Library was going to host a “Drag Queen Story Hour” on June 15. An official advertisement for the event promised “a special sparkly edition of storytime.”

“We will share stories of identity and inclusion and celebrate creativity with a craft,” the ad continued.

In an early post describing the new group, Bohach explained why she finds drag queens so offensive.

“500 Mom Strong is a group of women who have had enough with the sexualization of our children and the mockery of our femininity,” she wrote.

“The Spokane Public Library South Hill has decided to host a ‘Drag Queen Story Hour’ on June 15th, at 2pm. This is misogyny; drag queens are very offensive to women. They are grotesque hypersexualized caricatures of women. They mock women and debase our womanhood and femininity. A drag queen is no different than a racist donning black face,” she continued.

“The library hosting such an event teaches our sons that women are just sexual objects and it teaches our daughters that they must be overly sexualized to be desired. Enough is enough. We say NO more to a political agenda aimed at degrading women and sexualizing children. We say no to gender appropriation!”

Soon after 500 Mom Strong went live on Facebook, it was inundated with misogynist and sexually explicit abuse from drag queens and their supporters.

Bohach told LifeSiteNews by phone that the abuse has continued.

“We’re getting death threats daily,” she said. “They threatened to rape my husband.”

Bohach, who has four children, has been married for 13 years. She told LifeSiteNews that she had always told herself that she would do something if Drag Queen Story Hour came to Spokane. The call for action arrived when her mother phoned her with the news of the Spokane library hour.

“I think it came from God,” Bohach said. “It came into my head that I and a bunch of moms should do something about it.”

Their objections to Drag Queen Story Hour would be voiced as women uncomfortable with the stereotypes of femininity paraded by drag culture.

After Bohach founded 500 Mom Strong, the Spokane library asked her to be part of a panel discussion about Drag Queen Story Hour. When Bohach discovered the discussion was going to be on the same day as a Pride parade, she worried about being identified and harassed on the way to the library.

When the library agreed to a different date, Bohach discovered that everyone else on the panel was a drag queen supporter and she would not be allowed to bring people who shared her point of view. She decided not to go and was later told that the panel used the occasion to tell every concerned Christian woman in the audience that she was a bigot. A male professor gave them a lecture on men dressing as women.

“It was a man sitting there telling women that we’re not allowed to be offended by drag,” Bohach said, her voice cracking.

The heavy police presence, including “snipers on the roof,” was there, Bohach believes, because of false accusations from a rival Facebook group, called 500 Drag Queen Strong, that she had made death threats against them.

“It’s outrageous and a total lie,” she told LifeSiteNews.

Undeterred, the strong mom is hoping that other mothers will be inspired by her fight against the misogyny of drag queens and Drag Queen Story Hour.

“My goal is 500 moms,” she told LifeSiteNews. “I want to have 500 moms in each state who work together to stop it in their state.”

This is not an impossible dream: Bohach is already in demand.

“I’ve been getting calls from all over the country from people who want my help,” she said.

“From Texas, from Ohio, from California.”

One of the factors inspiring the women to join Bohach’s movement is their discomfort with men aping female dress and mannerisms.

500 Mom Strong will appear at Spokane Public Library’s downtown branch this Saturday, June 22, between 12 and 3 p.m. to protest its Drag Queen Story Hour.