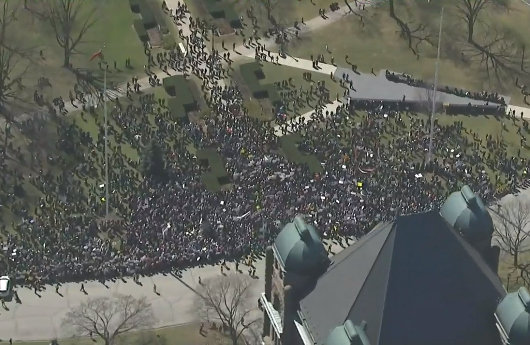 Aerial shot of the April 14 sex-ed rally outside Queen's Park, taken by CP24.

TORONTO, April 14, 2015 (LifeSiteNews.com) — Despite the serious subject matter, a festive atmosphere reigned at Queen’s Park April 14, about 5,000 Ontarians came by foot, subway, stroller, or bus to rally under a blue sky against the Liberals’ radical sex education curriculum set to rollout this September.

The now familiar refrain of “We say no! We say no!” was loudly chanted by demonstrators of widely diverse backgrounds, races and creeds, who had come from far and wide, including Toronto, Windsor, Chatham, Hamilton, Orillia, Mississauga, Brampton, and Niagara Falls to attend the demonstration, organized by the ad hoc parental rights umbrella group My Child My Choice.

A reporter for Toronto’s CP24 said the rally was “probably one of the biggest we’ve seen since Kathleen Wynne has taken power.”

“Parents are mad and we’re not going to stop,” said crowd marshal Claudia Rulli. “We will keep going and going and going.” Rulli, a mother of a two-year-old son and five-year-old daughter, told LifeSiteNews that she helped organize at least 50 busloads of protestors for the day.

Speaker Steve Tourloukis told the crowd that government promises of “opt out are easily made but don’t happen.”

The father of two has been embroiled in a lawsuit against the Hamilton-Wentworth District School Board since September 2010, with no resolution in sight. Tourloukis sued the board because teachers routinely refused to provide him advance notice about lessons containing material objectionable to his family’s Christian beliefs. “Today I have not been successful,” he said, adding that the battle has been expensive, even though “my case is strong. I believe I will win.” He asked parents to support him.

Parents have the legal right in the law to pull their kids from class, Tourloukis told the crowd. “Your parents’ rights don’t come from Kathleen Wynne, they come from God.”

Tory MPPs Monte McNaughton and Jack MacLaren echoed the theme of parental rights when they addressed the crowd. McNaughton (Lambton-Kent-Middlesex), former candidate for the Progressive Conservative leadership, who has been the sole voice in the Legislature speaking out against the sex-ed curriculum, assured the crowd he would keep up the fight.

“The government is going to ram something down your throats that you haven’t even been asked about,” MacLaren, MPP for Carleton-Mississippi Mills said. “And if you had have been asked, what would you have said?” At which point the crowd roared, “No!”

Charles McVety of the Institute for Canadian Values, rhetorically told Premier Kathleen Wynne “we are not your subjects. You have no right to decree” to parents what they teach their children.

Campaign Life Coalition spokesman Jack Fonseca pointed out the sex-ed curriculum’s link with convicted child pornographer Ben Levin, in the second day of his sentencing hearing. Levin is widely considered to be the architect of this curriculum’s 2010 prototype, which was pulled by Liberal Premier Dalton McGuinty because of parental backlash.

“Many parents recognize in the controversial elements of this curriculum, a pattern to lower childrens’ inhibitions regarding sexual matters and they attribute its presence to Levin,” Fonseca said. “Kathleen Wynne’s continual defense of this pedophile influenced sex ed curriculum is inexcusable.” Fonseca wondered if Wynne was vying with federal Liberal leader Justin Trudeau to be the “undisputed leader of the sexual left,” prompting shouts of “She must go! She must go!” from the crowd.

Farina Siddiqui of the Coalition of Concerned Parents and mother of three daughters aged 15, 12, and 10, all of whom attend public schools, said that parents are “very determined” and will not stop until the curriculum is “struck.” She said Wynne seems afraid of the parents, and fled them when Thorncliffe Parents Association staged a surprise protest April 11 at a school in the premier’s own riding. “She took the fire exit,” Siddiqui said. “What is she, a premier or a rat?” Wynne had police protection, she added: “We are not cannibals. We are not going to eat her. … We are common, every day kind of parents.”

Teresa Pierre of Parents as First Educators also spoke at the rally, and told LifeSiteNews, “We came to demonstrate to the Ontario government that this curriculum is not welcome in Ontario schools.” Pierre, the mother of two daughters and two sons, launched a petition in November 2014 on PAFE’s website that now has 57,133 signatures. LifeSiteNews also started a petition against the sex-ed curriculum that has 67,813 signatures to date.

Barrie MP Patrick Brown, one of two contenders remaining in the leadership race and endorsed by McNaughton, did not attend the rally but sent regrets and a statement. They were read out by enthusiastic, always smiling emcee, key organizer of these events and former Toronto school board trustee, Sam Sotiropoulos, who also had the task of often reminding the protesters to follow Queen's Park staff directions regarding grounds rules for the protest.

The demonstrators’ spirits kept remarkably high with frequent spontaneous chanting throughout the two-hour rally, “We say no! We say no!” Or, as parent Rulli put it, “We will not co-parent with Kathleen Wynne.”

Kathleen Wynne sneaks away from sex-ed protest as parents surround building; more protests on the way