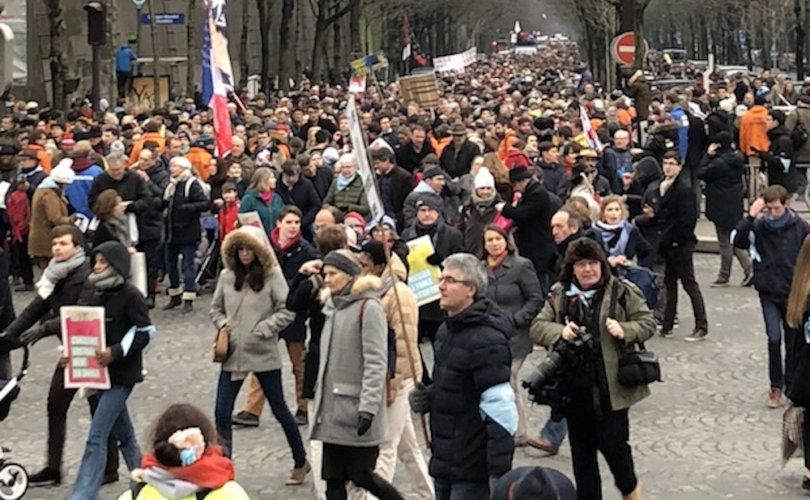 PARIS, January 21, 2019 (LifeSiteNews) — Despite the cold and repeat demonstrations of the so-called “yellow vest” protests against the French government over the last few months, the turnout at this year's Paris March for Life was impressive. Thousands of pro-lifers – 50.000, according to the organizers – walked through upscale neighborhoods of the country’s capital, ending the March at the Trocadero, which overlooks the Seine opposite the Eiffel Tower.

2019 will be a critical year for right to life issues in France, with a parliamentary debate coming up this spring on the periodical revision of this country's bioethics laws. Human embryo research, “in vitro” fertilization for lesbian couples and alone-standing women, genetic screening, and many other transgressive issues are on the agenda. Also in the news is conscientious objection, the main theme of this year’s edition, at a time when proclaiming one’s systematic opposition to abortion is next to impossible for all those who want to reach the top in politics or medicine.

Over the last few years, police authorities have gradually displaced the March for Life route to the quieter parts of Paris where fewer onlookers actually see the demonstration. At the same time, the French media at last seem to have noticed something is going on. For the first time, most major sources reported on the “Marche pour la vie,” and even though they minimized the numbers, quoting from “several hundred” to “7,400” participants, the tone of their news items was in general not aggressive. There was even a report on national television, with a mention of Pope Francis’ letter of support.

The Pope’s message to the organizers of the Paris March for Life was sent through normal diplomatic channels in a letter from Archbishop Luigi Ventura, papal nuncio in Paris:

“Pope Francis cordially greets the participants of the March for Life (…). The Sovereign Pontiff, animated by the conviction that ‘all the evil in the world is summed up by contempt for life,’ encourages them to bear witness untiringly to the unalienable value of human dignity and life.”

Over the years, the face of the Paris March for Life has changed. Its numbers have grown and, most remarkably, an overwhelming 90 percent of the participants are now age 35 or younger, an organizer told LifeSite. And of those, the majority are high school kids, students and young professionals, many of whom come by car, special buses or trains from the four corners of France.

Cécile Edel, foundress of the Paris March and president of one of the co-organizing associations, “Choose Life,” told LifeSite: “It's a real encouragement to see that there are so many young people present – people who 15 years ago were practically newborns. The flame of respect for life has been successfully passed on and is still burning strong.”

But at the very end, far from the loud music and festive spirit that have become characteristic of the Paris March for Life, an elderly gentleman who hasn’t missed an edition from the start bravely held up the banner of SOS Tout-petits, which regularly prays near public hospitals where abortions are performed, together with pro-life hero Dr. Xavier Dor. He told LifeSite that he will continue protesting as long as he has the strength. The 85-year-old’s indignation is intact. In this group, pro-lifers of all ages pray the rosary and implore heaven for mercy for the heinous crimes of abortion.

Isn't there reason for discouragement when the 13th edition of the Paris March is bearing witness to the fact that respect for life has receded over the years and that upcoming laws threaten to make the situation worse? Cécile Edel does not agree: “From a human point of view, discouragement can exist with the idea that all this is bearing no fruit – or rather because of the impression that there are no fruits. But I have always thought that we are not reasoning in terms of success. We are here to do our duty: to bear witness to respect for all human life.”

“The fact that so many young people are present shows that our witness has borne fruit in itself, if only because the issue is still in the news and that we are still talking about it. Even more, we are always in an attitude of hope: we who have faith know that victory has already been won. At ‘Choose Life,’ we see many young people who show us that the issue is very much at the surface. 45 years after the legalization of abortion, its consequences are becoming more and more clear and women are at last starting to talk about what it really is. The word has been liberated.”

This shows clearly another remarkable development. Over the past years, the Paris March for Life gained support from a number of Catholic bishops, many of them retired. Now, the small nucleus of historic French pro-life bishops in activity continues to support the March, but this year 20 bishops from all over France officially encouraged the event. These include the Cardinal of Lyons, Archbishop Philippe Barbarin, and, for the first time, the new Archbishop of Paris, Michel Aupetit. Aupetit was a medical doctor when he received the calling to become a priest, and he has taken a front-line role in the current debate on bioethics.

In a letter to the organizers and 1,000 volunteers, he recalled: “It is a lie to oppose ‘pro-choice’ and ‘pro-life.’ One must be free from all deadly and dominant social pressures in order to defend life today. That requires a great deal of courage. Thank you for your mobilization; I encourage you to tell the beauty of love and of life in season and out of season.”

Bishop Dominique Rey of Toulon, on the French Riviera, deserves special mention. He has always supported the March for Life, he told LifeSite, but this year he was present in person because of the importance of the issues that are under debate, and because bearing witness to the respect for human life is so fundamental.

The Paris March for Life has become less apologetic about the role played by Catholics in defending life, even though many non-Catholics or non-believers do participate. Its spokesmen and spokeswomen also clearly told the truth about abortion: “In politics, they try to ease their own conscience by trying to deny the unborn child’s human nature, in the face of scientific evidence. To be sure, they would otherwise have to admit that they are accomplices to an immeasurable crime, by promoting, fostering and facilitating a crime against humanity: the humanity of each aborted child.”

These words were fearlessly proclaimed on the podium at the end of the March by Guillaume Bernard, a political analyst who teaches law at the Catholic Institute of Higher Education in the Vendée.

The March’s official spokeswoman, Adelaïde Pouchol, underscored the particular relevance of this year’s edition. While the “yellow vests” are trying to gain attention for the “material hardship” many ordinary French citizens are facing under ever-rising taxes and low pensions, she said pro-lifers stressed the “spiritual hardship” brought about by abortion and disrespect for human life.

French President Emmanuel Macron has opened a “Great Debate” that is taking place throughout the country under official leadership about the “great challenges faced by the nation:” taxation, public spending and public services, the “ecological transition,” democracy, and citizenship are all on the board. But along with other hot-button issues such as immigration, the fundamentals of social debate have been explicitly set aside, such as right to life, the definition and scope of marriage and family, even though they are prerequisites for a just society.

The Paris March for Life hopes to impose those themes in the debate at a critical point in French history: France’s abortion rate is going up, births are slowing, as is its fertility rate, now at 1.87 birth per woman despite immigrant births, and the number of yearly deaths is slowly rising.