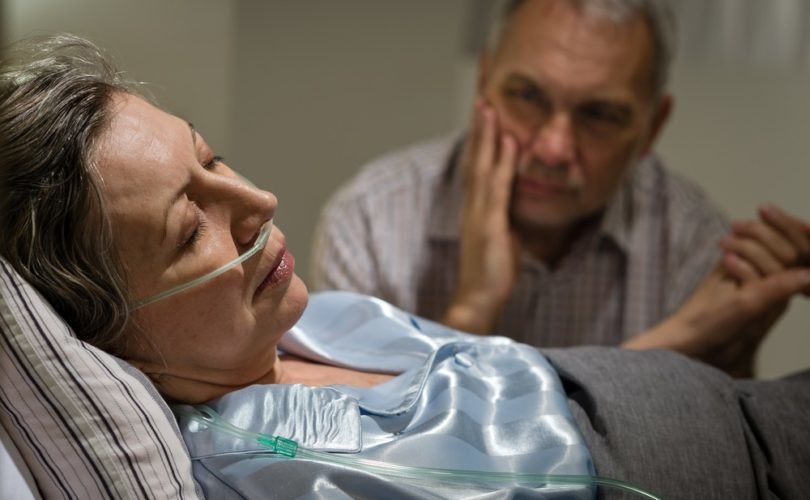 April 28, 2015 (LifeSiteNews.com) — More than half of all Dutch physicians specialized in euthanasia would consider approving euthanasia for a demented patient, according to a survey carried out last year and made public last week at an academic symposium held at the VUmc Free University in Amsterdam.

“SCEN” doctors – as they are known – form the Support Consultation Euthanasia Network Netherlands whose members can be called upon by family doctors who face a euthanasia request and who need help with the procedure, specialized and independent advice as to whether their patient should “benefit” according to the requirements for “careful” euthanasia, or a second opinion as prescribed by the Dutch euthanasia law.

547 physicians – 82 percent of all SCEN doctors – took part in the survey, making it a very accurate representation of the present state of mind of those who play a leading role in the practice of euthanasia in the Netherlands. They are often called in when a family doctor is unsure whether acceding to a euthanasia request complies with the “requirements of careful practice.” Compliance with the “strict” criteria of the law is assessed retrospectively, once the act has been performed and declared: should it not be judged “careful,” the family doctor would then face prosecution. A SCEN doctor’s opinion is no guarantee, but it is extremely rare for the Regional Euthanasia Control Commissions to disavow it.

In the survey, 4 percent of the SCEN doctors said they had personally approved euthanasia for a person who was unable to express his or her personal will because of advanced dementia.

Considering the first such case registered – and approved – by a Regional Euthanasia Control Commission took place only four years ago, in 2011, this is no small number: it means 22 SCEN doctors have already approved euthanasia in that context even though the actual amount of acts performed would probably be lower.

Even more worryingly, 52 percent of the doctors said they could imagine personally approving euthanasia in the case of a demented person incapable of expressing his or her will, should the patient have requested it through advance directives or a “living will.”

This growing preparedness to consider lawful the deliberate killing of a dependent and defenseless person is something of a novelty in the Netherlands. Most doctors remain squeamish about euthanasia for the mentally incompetent and refuse to act upon advance directives drawn up when the patient was still well enough to do so.

This is a sticking point between family doctors and the Dutch euthanasia lobby, which argues that the euthanasia law provides for such cases. The euthanasia lobby is in fact right: the letter of the 2001 law clearly states that advanced directives can justify euthanasia. But on the other hand it is the family doctor who makes the final decision. A very large majority of practicing doctors refuse to act on the provision. It is even this fact that has motivated a growing tendency to euthanize patients with incipient dementia, so as to avoid refusing their request once they would become incapable of expressing their death wish.

But overall resistance against euthanasia on mentally incompetent patients is apparently dwindling.

Not surprisingly, 49 percent of the SCEN doctors who participated in the survey said they consider that the limits of what is considered “acceptable” and compliant with the law have broadened since they entered the network – on average since 8 years; some since the law came into effect. This is proof positive of the “slippery slope” syndrome.

The Dutch euthanasia law’s broadening scope is a sign that the Control Commissions are not controlling much: cases where they judge a euthanasia act “not careful” are extremely rare. The present survey shows that the SCEN network is also playing a role.

Eleven percent of the surveyed SCEN doctors said they had already approved euthanasia for patients who were simply “tired of living,” who had no severe or terminal illness causing “unbearable suffering.” Thirty-two percent are prepared to consider doing so in the future, even though the law does not provide for such cases.

Seventy-five percent of the SCEN doctors consider it acceptable to approve euthanasia for a person refusing all treatment. A small majority would consider approving the killing of a person incapable of communicating, provided there was a living will, but also – even more alarmingly – on the basis of information afforded by third persons.

The survey showed that 70 percent of SCEN doctors have occasionally given advice for treatment in order to relieve a patient’s suffering; 62 percent suggested one time or another that palliative care would be more relevant than euthanasia. The professional journal Medisch Contact considered this to go beyond their scope: offering genuine help would encroach on palliative care doctors’ responsibility and go against their own “independence.”

The survey’s authors say they were “satisfied” to find that the personal experience and beliefs of SCEN doctors does not “interfere” with their judgment as regards the compliance of a euthanasia case with the law: “Seen in the light of the quest for standardization of judgment-forming this is a positive result,” they conclude.