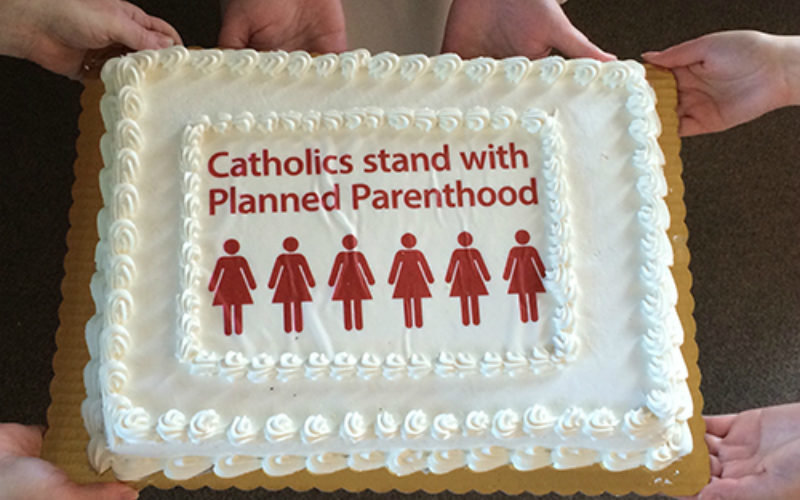 Washington, DC, November 10, 2015 (LifeSiteNews) – Before the Planned Parenthood human body part trafficking scandal was even a month old some 50-plus pro-abortion and pro-homosexual purportedly “faith-based” groups sent a letter urging the U.S. Senate to disregard efforts to defund the abortion giant.

“A world without Planned Parenthood would be disastrous for many women and their families,” the letter stated.

The letter to the Senate was drafted by pro-abortion Catholics for Choice, and among the 56 signers were homosexual activist groups New Ways Ministry and DignityUSA, along with other pro-abortion, feminist and liberal organizations.

Catholics for Choice, which lists Warren Buffet and the Ford Foundation among its donors, has been repeatedly and forcefully condemned by the U.S. Catholic bishops and ordered to stop using the name Catholic. In 2000, the United States Conference of Catholic Bishops stated that CFC “is not a Catholic organization, does not speak for the Catholic Church, and in fact promotes positions contrary to the teaching of the Church as articulated by the Holy See and the NCCB.”

In their letter to the Senate, the pro-abortion faith-based groups stated, “Planned Parenthood touches the lives of millions of young people with education programs and online information that helps foster health and safety; it provides women with quality medical services, including abortion; and it embodies the highest of standards of medical and ethical care.”

In one video a technician recounted how an abortion clinic took fetal body parts without parental consent and harvested a baby’s brain while the baby’s heart was still beating. The videos have also caught abortion staffers appearing to describe using the illegal partial birth abortion procedure, and altering the method of abortion in order to harvest the best possible “specimens” – both of which are prohibited under federal law.

“We represent millions of people of faith committed to ensuring women’s health and moral autonomy,” the pro-abortion group told the Senate. “We are deeply troubled by the latest deplorable attacks on Planned Parenthood by faux groups, which demonstrate the lengths to which antiabortion extremists will go to curtail women’s right to obtain a legal medical procedure.”

The letter referred to the Center for Medical Progress as “anti-choice extremists” who resorted to “methods of deceit” to “try to dupe the public and policymakers” with “smear campaign videos” that are “heavily edited and misleading.”

A forensics report released September 29 by a firm that performs analysis for criminal investigations confirmed the undercover videos of Planned Parenthood shot by the Center for Medical Progress are authentic and unaltered.

“As groups representing millions of people of faith, including those who access healthcare at local Planned Parenthood centers, we affirm our support for the incredible and necessary work of this organization,” the pro-abortion coalition stated to the Senate. “We call on you to reject the underhanded, dishonest attempts to discredit Planned Parenthood and to consider who will be harmed if federal funding to this important organization is blocked or eliminated.”

A graphic released in mid-August by the Alliance Defending Freedom and Susan B. Anthony List's Charlotte Lozier Institute displayed a U.S. map identifying tens of thousands of existing health care clinics that could fill any medical need that would arise should Planned Parenthood be defunded and have to cut its services.

A Congressional Budget Office report released in Mid-September found that defunding the abortion behemoth would result in saving thousands of unborn lives and $235 million over a decade.

Catholics for Choice was behind further Planned Parenthood promotional efforts directed toward Congress later in the scandal, organizing a full-page ad in the Washington Post in late September in support of Planned Parenthood along with some 60 Catholic state leaders and legislators from 25 states. They also delivered cakes to Planned Parenthood staff on the August 21 day of national protest against the abortion chain, decorated with a message stating “Catholics stand with Planned Parenthood.”

Several attempts by Congress to defund Planned Parenthood since the scandal erupted have fallen short. The next opportunity to end taxpayer funding of the nation’s largest abortion business comes up after December 11 when current funding of the federal government runs out again.