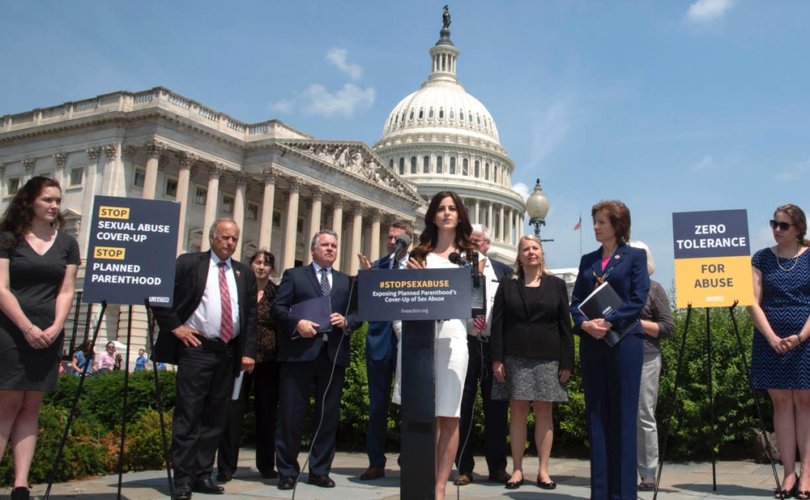 Planned Parenthood has a decades-long history of covering up crimes against minors which has gone largely ignored.  Live Action has released its report and video series seeking to blow the lid off Planned Parenthood’s unchecked, ongoing criminal behavior victimizing young girls who are already victims of sexual assaults.

“Abuse cover-up is systemic to the abortion industry,” said Lila Rose, founder of Live Action which produced the investigative report and video series.

“What these abusers do––what sexual traffickers do––to their victims is take them or threaten to send them by force to an abortion facility, which can become a key place for that abuse to be covered up,” said Rose.  “And Planned Parenthood, instead of reporting the abuse as they’re mandated to do in virtually all fifty states by law––instead of reporting abuse, instead of being that person who can encounter a girl in a situation of extreme distress and be that moment of intervention for her––does a secret abortion, has a ‘don’t ask, don’t tell policy,’ and sends this vulnerable young girl back into the arms of sex abusers.”

“The lies that are coming from the Big Abortion Industry are just heartbreaking,” Black continued.  “Live Action’s findings show us that these same lies are used to willfully neglect reporting these horrific cases of abuse, rape, and sex trafficking.

Sometimes these young teenage girls plead with Planned Parenthood staff to them help them escape their abusers, but their pleas go unheeded.

“It’s come to light that Planned Parenthood performs abortions on girls as young as 12 years old, and then sends them right back into the arms of their abusers without alerting the authorities,” noted Black.  “It is shameful.”

“Planned Parenthood’s failure to report these heinous crimes does not empower women or our children;  It empowers their abusers,” said the Congresswoman.  “The despicable cycle of these facilities, turning a blind eye to sexual abuse and exploitation of our children must end.”

It seems that Planned Parenthood … has broken the law,” said Rep. Mark Walker (R-NC).  “There should be a full investigation into whether or not Planned Parenthood willfully turned over child victims of abuse back to their abuser, and if necessary, criminal prosecution.”

“Are these lives not important to Planned Parenthood?  Or is the greater abortion industry more important than protecting these young innocent lives?” wondered Walker.

“We’re borrowing money from China to send to Planned Parenthood, how moral is that?” asked Iowa, Rep. Steve King (R).  “I don’t think any taxpayer dollars should go to any organization that either does abortions or counsels in favor of them.”

“Planned Parenthood portrays itself as a champion of women’s rights, but Live Action’s investigation exposes the abortion giant’s systematic betrayal of vulnerable women and girls,” said former Congresswoman Marilyn Musgrave in advance of the gathering.  Musgrave now serves as Vice President of Government Affairs for Susan B. Anthony List.

“Abortion is a gift to pimps, traffickers, and abusers,” continued Musgrave, “and Planned Parenthood, America’s largest abortion business, has helped them cover their tracks while raking in more than half a billion dollars from taxpayers every year. We can’t put a price on the lives and dignity of unborn children and their mothers. That’s why further action is needed to disentangle taxpayers from the scandal-ridden abortion business.”

As a result of Live Action’s reporting, fifty-six members of Congress today called on the U.S. Department of Health and Human Services to begin an investigation into Planned Parenthood.

The report’s findings suggest that abusers feel comfortable taking their victims to Planned Parenthood. We are therefore requesting an investigation into Title X recipients, particularly Planned Parenthood, to determine how widespread this failure is and if there are other instances where Planned Parenthood failed in its duty to report suspected child abuse to local authorities and to HHS.

“Members have requested that HHS turn over records regarding all incidents of Planned Parenthood’s Title X recipients’ failures to report suspected sexual abuse of minors in their care, records of the steps taken to bring recipients into compliance with reporting laws, and documentation of any disciplinary actions,” according to a statement about the letter released by Live Action.

“Since 1999, federal regulations have made clear the expectation that organizations that receive federal Title X ‘family planning’ grants follow state laws mandating the reporting of suspected child sexual abuse and rape,” continued the statement.  “Planned Parenthood is the largest recipient of Title X funding, receiving about $60 million annually through the program. It is also the nation’s largest abortion provider. In 2015, 474 of nearly 650 Planned Parenthood facilities received Title X funding.”

The first of Live Action’s investigative report videos provides an introduction to the project and an overview of what to expect in its future installments, including documented cases, the testimony of former abortion industry insiders, two of Live Action’s own previous undercover investigations, the lies Planned Parenthood has told in response to the allegations, and what consequences the offending personnel have faced, if any.

The group has also released Part 2 in the series, “Recorded Cases.” It details how the abortion giant’s refusal to report men who brought in girls as young as age twelve for abortions enabled their abusers to continue raping them. Live Action has documented many of these cases here and here.

Live Action says that a later installment will quote former Planned Parenthood insiders such as Sue Thayer and Catherine Adair, who say the organization actively discouraged reporting of children being brought in by their apparent abusers.

“Planned Parenthood has actively participated in illegal activity, selling the body parts of aborted babies in exchange for profit,” said Abby Johnson, a former abortion advocate and Planned Parenthood director who is now a pro-life activist.  “They’ve lied to the very women they purport to fight for. I saw it first-hand when I worked for the abortion giant and yet, they still manage to obtain over half a billion dollars a year in our tax dollars.”