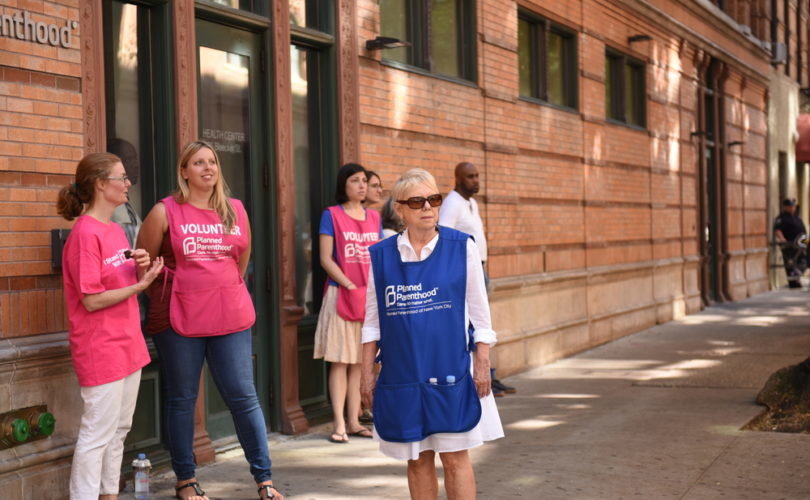 Pro-abortion activists wait outside a Planned Parenthood to escort women inside for abortions.a katz / Shutterstock.com

“Each one of these abortions is a tragedy, not just because an innocent child has died, but because of the last impact the abortion itself had on the mother of those children,” NRLC President Carol Tobias told LifeSiteNews this afternoon.

“While we estimate that more than one million unborn children are still being aborted every year, we know that we will ultimately be successful,” Tobias told LifeSiteNews, “because at our core as a society, we know the immutable truth: killing unborn children is wrong.”

The finding was one of several contained in its third annual “State of Abortion in the United States” report, which NRLC released this afternoon.

Founded in 1968, NRLC and its 50 state and 3,000 local affiliates “have worked tirelessly to enact laws that protect unborn children and offer a life-affirming alternative to their mother, and we see the strategy is working,” she said – and ever-falling abortion rates confirm that.

NRLC's Director of Education and Research, Randall K. O'Bannon, said the number of abortions in the United States “peaked in 1990.” But in a report released last November, the U.S. Centers for Disease Control and Prevention (CDC) found a 4.2 percent decline in the number of abortions performed during the 2012 reporting year alone.

“This is still too many by any accounting, but it is a sign of great progress,” he told LifeSiteNews. Multiple measures, from the rate and ratio of abortions to numerous public opinion polls, “indicate that behaviors and attitudes toward abortion have been changing – and that is best explained by pro-life education, legislation, and outreach.”

Their new report finds that most abortions are performed early, and a growing number are by chemical or “medical” abortion – involving taking a series of pills and miscarrying, often into a toilet.

A total of 65.8 percent of abortions in states that report such data are performed at eights weeks gestation or earlier – and 21 percent of those abortions were performed by medical abortion.

Once again, single women make up 85 percent of all abortions.

The report also tracks executive policies that affect abortions, enacted by presidents from Ronald Reagan to Barack Obama, showing federal laws often ping-ponging from the one interpretation to another depending on who holds office – something that should spur pro-life readers to be involved in the political process.

NRLC Legislative Director Douglas Johnson told LifeSiteNews that votes in the Republican-controlled Congress are moving in the right direction. In the House, NRLC recorded 10 roll call votes – and the pro-life side prevailed all 10 times.

Of the four Senate votes, pro-life senators “mustered a majority,” but “a majority is not sufficient” due to Senate rules, which require 60 votes to end a minority filibuster.

“We have not had 60 votes on any of these matters,” he said. “We also face the hardline and inalterable, apparently, pro-abortion views of President Obama.”

“Even after seven years of pro-abortion policies from the Obama Administration, the right-to-life movement is making tremendous gains on behalf of mothers and their unborn children,” Tobias said in a press release accompanying the report. “As the November election approaches, the right-to-life movement stands ready to protect our pro-life majorities in Congress and elect a pro-life president.”

“That there are hundreds of thousands fewer abortions today than there were ten, or even twenty years ago is proof that pro-life education, legislation, and outreach make a difference,” the report says. “Keep informed, stay active, and expand the outreach so that more and more lives are saved.”