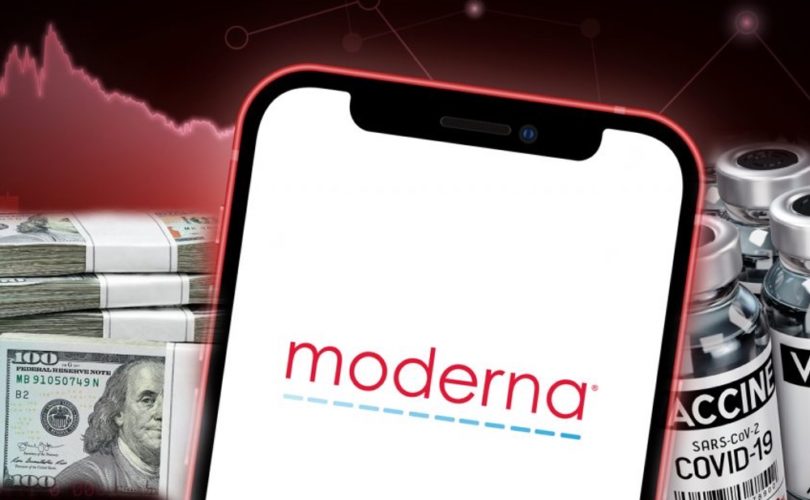 June 17, 2021 (Children’s Health Defense) — For the fifth time since the onset of the COVID pandemic in early 2020, the skyrocketing price of Moderna stock has produced a billionaire.

Moderna President Dr. Stephen Hoge is the company’s latest shareholder and executive to join the “three-comma-club” — with an estimated $1.1 billion fortune.

Hoge is one of more than 40 new billionaires who made 10-figure fortunes with companies involved in the “battle against COVID.”

Activists say this wealth generation highlights the stark inequality that has resulted from the pandemic, CNN reported.

“These billionaires are the human face of the huge profits many pharmaceutical corporations are making from the monopoly they hold on these vaccines,” Anne Marriott, Oxfam’s health policy manager, said in a statement. “These vaccines were funded by public money and should be first and foremost a global public good, not a private profit opportunity.”

Since February 2020, Moderna’s share price has gained more than 700%. Over the past month alone, the company’s stock is up 29%. During this same timeframe, Moderna applied for Emergency Use Authorization from the U.S. Food and Drug Administration for its COVID vaccine in adolescents, and increased its forecasted production of vaccine in 2021, from 800 million doses to 1 billion.

As The Defender reported previously, Moderna’s COVID vaccine is funded almost entirely by U.S. taxpayers. Through its partnership with the U.S. government, Moderna received nearly $1 billion for research and development of its mRNA vaccine, and up to $1.525 billion for delivering 100 million doses, with an option for another 400 million.

As described in The People’s Vaccine, the U.S. government provided millions of dollars to Moderna as early as 2013 to help develop its mRNA technology. The NIH meanwhile was also developing new methods to target COVID spike proteins. When the new coronavirus emerged in Wuhan, China, the NIH worked with Moderna to design and test a vaccine.

Fauci and the NIAID have a financial incentive to push Moderna’s vaccine over competitors’ COVID vaccines — because Fauci personally, and others on staff, have a financial stake in the Moderna vaccine. Fauci and four of his hand-selected deputies will split hundreds of millions of dollars in royalties with Moderna from sales of the vaccine.

Moderna continues to ignore problems with its vaccine

Moderna’s stock has risen steadily, and its top executives have benefited accordingly, despite a growing number of reports of injuries and deaths following the vaccine.

According to the latest data from the Center for Disease Control and Prevention’s (CDC) Vaccine Adverse Events Reporting System (VAERS), between Dec. 14, 2020 and June 4, a total of 329,021 total adverse events were reported following COVID vaccines, including 5,888 deaths and 28,441 serious injury reports.

As The Defender reported this week, Simone Scott, a 19-year-old freshman at Northwestern University in Evanston, Ill., died June 11 of complications from a heart transplant she underwent after developing what her doctors believe was myocarditis following her second dose of the Moderna COVID vaccine.

Scott received her second dose of Moderna on May 1, after which she developed heart complications which required her to have a heart transplant. Her doctors have not fully confirmed the cause of her death, but they said it appears Scott suffered from myocarditis — which according to researchers at the National Organization for Rare Disorders, can result from infections, but “more commonly the myocarditis is a result of the body’s immune reaction to the initial heart damage.”

Justin, whose school required him to get the vaccine in order to attend classes in the fall, experienced flu-like symptoms followed by heart pain within eight to 12 hours of receiving the vaccine.

“He has to wear a heart monitor and take four different medications for six months,” Justin’s father said. “He has to sleep propped up, can’t exert himself and he’s missing out on one of the most important times of his life.”

As recently as last week, Moderna said it has not found a link between its COVID vaccine and cases of a rare heart inflammation condition reported in young people who have received the shot.

The vaccine maker said in a statement it arrived at this conclusion after “carefully reviewing available safety data to date for the Moderna COVID-19 vaccine for cases of myocarditis and/or pericarditis.”

The CDC said during a June 10 meeting of the U.S. Food and Drug Administration’s (FDA) Vaccines and Related Biological Products Advisory Committee the agency had identified 226 reports of heart inflammation that might meet its “working case definition” of myocarditis and pericarditis following the shots, The Defender reported last week.

Moderna said it “will continue to closely monitor these reports and is actively working with public health and regulatory authorities to further assess this issue.”

“We clearly have an imbalance there,” said Dr. Tom Shimabukuro of the CDC’s Immunization Safety Office during the June 10 FDA meeting. The committee met to discuss safety issues surrounding the use of COVID vaccines in children as young as 6 months old.

The CDC has scheduled an emergency meeting of its advisers on June 18 to discuss higher-than-expected reports of heart inflammation following doses of Pfizer and Moderna COVID vaccines.

On May 10, EU regulators called on Pfizer and Moderna to provide additional data related to the companies’ COVID vaccines and a potential link to heart inflammation, after the agency completed a safety review of all four COVID vaccines authorized for emergency use in the EU.

In a report issued May 7, PRAC disclosed its members were aware of cases of myocarditis and pericarditis following Pfizer vaccination. Regulators said they didn’t see an indication the vaccine caused these cases, but as a prevention, PRAC requested Pfizer provide further data, including an analysis of events according to age and gender in its next pandemic summary safety report and will consider if any other regulatory action is needed.

Because Moderna and Pfizer use the same mRNA technology for their vaccines, the committee asked Moderna to monitor for similar cases of heart inflammation.

Doctors have warned both the Pfizer and Moderna vaccines also could cause blood clotting disorders, similar to those associated with the Johnson & Johnson (J&J) and AstraZeneca vaccines.

As The Defender reported in April, U.S. regulatory officials were alerted to that fact as far back as December 2020.

A study released in April by Oxford University found the number of people who developed CVST blood clots after COVID vaccines was about the same for Pfizer, Moderna and AstraZeneca, MarketWatch reported. (J&J is not approved for use in the EU, where the study originated).