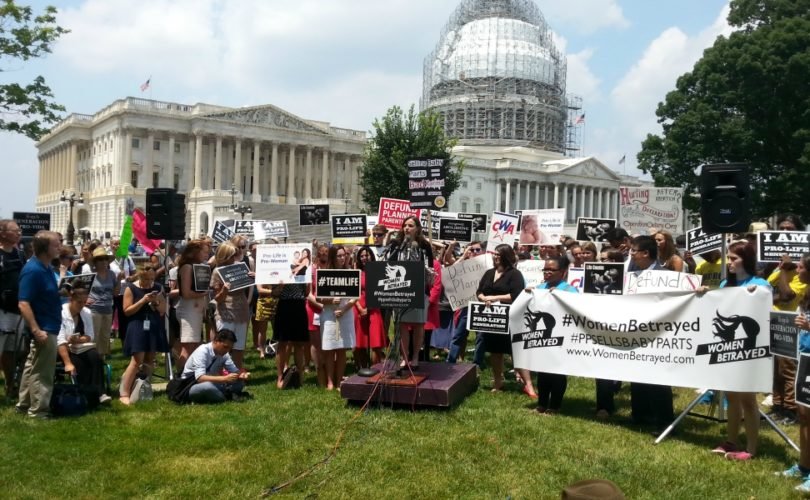 WASHINGTON, D.C., July 28, 2015 (LifeSiteNews) — Thousands of pro-life activists participated in rallies in more than 60 cities and towns around the country Tuesday, where they demanded that Congress defund Planned Parenthood.

Organized by Students for Life of American (SFLA) and its sister organization, Pro-Life Future, the rallies were a response to videos that show senior Planned Parenthood officials admitting the organization harvests and sells body parts from aborted babies.

“We are very conservatively estimating 13,000 participating at all 65 cities with two confirmed babies saved so far!” SFLA president Kristan Hawkins told LifeSiteNews. “Hundreds are showing up at each event and the grassroots are on fire. Every news outlet was at the DC rally, and we are seeing articles in the media from nearly every rally.

“It’s been an incredible day uncovering the truth about Planned Parenthood and making sure all Americans know what goes on behind closed door[s] and how the abortion giant makes money off of women in their times of crisis.”

A rally near the U.S. Capitol in Washington, D.C. drew more than 500 people and three Republican presidential candidates — Sen. Rand Paul of Kentucky, Sen. Ted Cruz of Texas, and Dr. Ben Carson. More than a dozen Members of Congress and outside organizations were represented at the rally. Groups present include Alliance Defending Freedom, the Susan B. Anthony List, Americans United for Life, and the Family Research Council.

Senator James Lankford, R-OK, who introduced a temporary, partial defunding bill, also spoke at the rally, as did Kansas Rep. Tim Huelskamp and other Members of Congress.

According to Hawkins in a press release, the rallies represented “women across the nation [who] rose up today to say that they deserve better than Planned Parenthood and abortion.”

“Photos and videos are pouring in to us at Students for Life of America and being posted on social media of the other 65 #WomenBetrayed rallies happening across the country. The response from the grassroots to defund Planned Parenthood has been truly astounding.”

The Family Research Council's Arina Grossu, who is the Director of the Center for Human Dignity, said at the Capitol rally that “Planned Parenthood is performing barbaric and grotesque activities and yet received $528 million in combined federal, state and local government grants and contracts in 2013-2014, and has a reported revenue of over $1.3 billion.”

News reports show that rallies were held in South Bend, Indianapolis, and Buffalo. Texas Right to Life partnered with the Houston Coalition for Life and Texas Eagle Forum to hold a rally in Houston in front of a Gulf Coast Planned Parenthood clinic.

Congressional leaders have promised action to investigate and defund Planned Parenthood. However, the complex funding mechanisms may make defunding impossible.