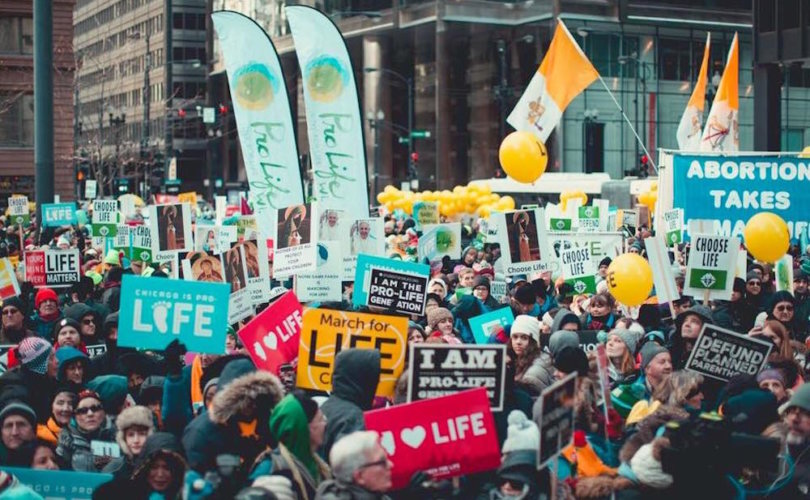 Update January 22, 2019: This report has been updated with a final attendance estimate from March for Life Chicago.

CHICAGO, January 14, 2019 (LifeSiteNews) – As pro-lifers from across the nation prepare to gather in Washington, D.C. this week to stand against abortion, thousands already gathered this weekend to demonstrate their support for life in the Windy City.

“We mark with deep sadness the great tragedy of the legalization of abortion in the United States along with the devastating social, moral, and legal consequences that have followed,” the March’s website says of its purpose. “Our vision is that, marching together in hope, we call upon religious, civic, and community leaders to renew every effort to build a nation that affirms the authentic dignity of women and men, the gift of children, and a culture dedicated to protecting life at every stage of development in law and love.”

Photos of the turnout show packed streets with enthusiastic men and women of all ages bundled up and bearing signs proclaiming “right to be born,” “abortion takes a human life,” “a person’s a person no matter how small,” and more.

Tons of energy and a ginormous crowd for #March4LifeChi.#ProLife pic.twitter.com/tXSpsU6siz

#prolife is for ALL life, even those who work in the abortion industry. We pray for you and help is at https://t.co/4ESdS7vtcs! #March4LifeChi #MarchForLife #Feminism #WomensWave #reprorights #pink #PlannedParenthood #love #pray pic.twitter.com/Pk49NCdic3

At the #march4lifechi, @CardinalBCupich addressed the younger crowd @ Federal Plaza: “You, young people, give us hope & encourage us as we know that year after year as we march into the future, there will be others who will continue this effort to protect human life and dignity.” pic.twitter.com/RFHfwb3soB

Among the speakers was a young woman named Rayanna, who along with her little girl appeared onstage to attest to how Illinois pro-life pregnancy center Aid for Women helped her choose life. (Her remarks begin 14 minutes into the below video).

“I initially felt scared and overwhelmed, I felt that I would be so judged. That’s what led me to my first decision of abortion. I didn’t know what to do next, so I went online and the first thing that came up was Aid for Women,” she explained. “The woman on the phone was so understanding, she offered me a free ultrasound and said that we could talk about all of my decisions. When I went to my appointment at Aid for Women and saw my ultrasound, I cried. I was able to see her whole body; she was my breathing little person.”

Rayanna went on to detail how Aid for Women gave her a place to stay, parenting resources, and loving support she says helped her grow up. “Going to Aid for Women was the best decision of my life,” she said. “They gave me so much, they helped me through a very difficult time, provided me and my baby a home, and made me feel like I had hope again.”

Several hundred pro-abortion counter-protesters also gathered across the street from Federal Plaza, with one young organizer making the bizarre claim to the Chicago Sun-Times that “neo-Nazis and white supremacists find cover among the Pro-Life protesters, with their view being women should be incubators to perpetuate white supremacy.”

“They know the importance of the life issue and unfortunately they're on the wrong side of it,” pro-life protester Daniel Pribble told WGN of the counter-protest. “They might have a civic right to be here, but they don't have the moral right to be here.”