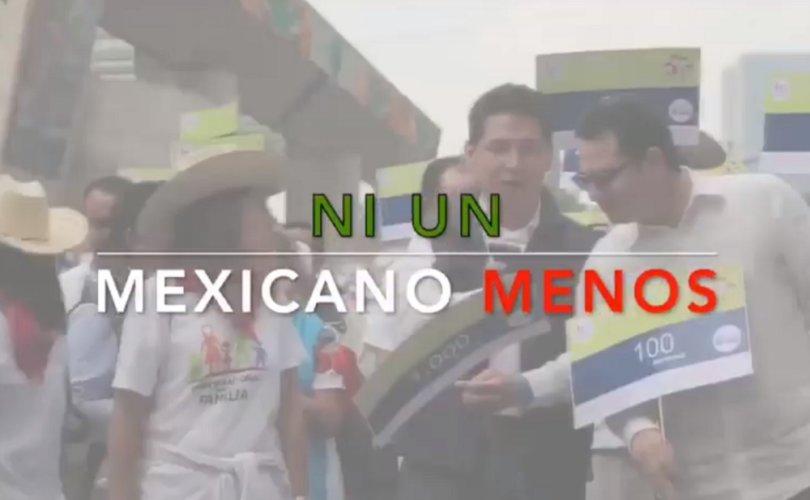 MEXICO CITY, September 23, 2019 (LifeSiteNews) — More than 600,000 Mexicans hit the streets on Saturday to show support for families and human life, which pro-life organizations say are imperiled by their government’s abortion and gender ideology.

Organized by Mexico’s National Front for Family (FNF), the march was active not only in Mexico City, but in 100 other cities and towns across the country.

In an interview with LifeSiteNews, FNF president Rodrigo Iván Cortés said the purpose of the march was to “defend life, family and fundamental freedoms. We want to give voice to the voiceless. We want to embrace Mexico and say strongly and clearly, ‘Not one less Mexican.’” He said his country is suffering under the weight of organized crime and a “culture of death” that are tearing families apart. “It is ironic,” Cortés said, “that our politicians want to worsen the crimes being committed by the drug cartels by seeking to legalize abortion.”

According to Cortés, politicians are seeking to redefine marriage and family life by pushing for transgender ideology not only in schools, but in the public forum by squelching dissent and free speech. Cortés said peace in Mexico will be possible when families and all human life are respected. “Authentic democracy will only be possible when fundamental freedoms for conscience and belief are respected, as well as parents’ freedom to educate their children,” he said.

Cortés pointed out that the Mexican government, through its Office of Sexual Diversity and other ministries, and members of the ruling MORENA party are pushing for the decriminalization of abortion throughout the country. “At the federal level, there is National Deputy Lorena Villavicencio’s bill to decriminalize abortions committed within the first trimester and Senator Citlalli Hernández’s bill to prohibit conversion therapy,” said Cortés. He also denounced groups of the “radical left,” linked to socialist Cuba and Venezuela, “who want to impose a culture of death, through legislation that would allow for legalized murder with the most absurd arguments. In addition, Cortés named the International Planned Parenthood Federation and affiliated groups in Mexico, such as the Mexican Family Planning Foundation (MEXFAM), and the Open Society foundation funded by financier George Soros, as the source of funding for pro-abortion activities.

Pro-lifers participating in the march were active in Guadalajara, Celaya, Guanajuato Querétaro, Xalapa, Monterrey, Pachuca, Huejutla, Tlaxcala, Chilpancingo, Puebla, Naucalpan, and Hidalgo. In the United States, there were also marches in Chicago and San Diego, where marchers rallied at Mexican consulates. Many of the marchers wore white and the sky blue bandanas that have become the identifying mark of pro-lifers in Latin America.

A declaration was read in the cities where marchers were on the move that said: “Mexico doesn’t need more of the culture of death. All of us must work not only to stop the madness of organized crime, in all of its facets, but also build an authentic culture of life.” It went on to say, “For this to happen, it is necessary to start with the family, the basic cell of society, in which life is not only created, but where it must be welcomed and cared for throughout its life cycle and continuously strengthened through a good education.”

The document called on the Mexican government to uphold the rights of all citizens, “starting with the most vulnerable Mexicans. If we cannot guarantee life, we certainly cannot do so for the rest of basic values.” The declaration rejected all forms of the “legal or tolerated criminal violence, such as prenatal murder, and illegal criminality such as extortion, kidnapping and murder of thousands of people who are members of millions of families.”

Actor Eduardo Verástegui sent his countrymen a salute on the FNF Facebook page, thanking them for their support for women. He called on them to watch the Mexican premiere of Unplanned, a movie that recounts the life of Abby Johnson, a former Planned Parenthood manager who left behind the abortion industry to become a noted pro-life advocate.

“Together we can defend life, family and women. May God bless you; thanks for everything you do so that Mexico can be a better place to live,” said Verastegui, who has been notable for his forthright Catholic faith and pro-life advocacy.

On Monday, Cortés and other members of his organization delivered their declaration to the office of Mexican president Andrés Manuel López Obrador. A sister organization, the Binational Pro-Family Pro-Life League, delivered the statement to the Mexican consulate in San Diego.