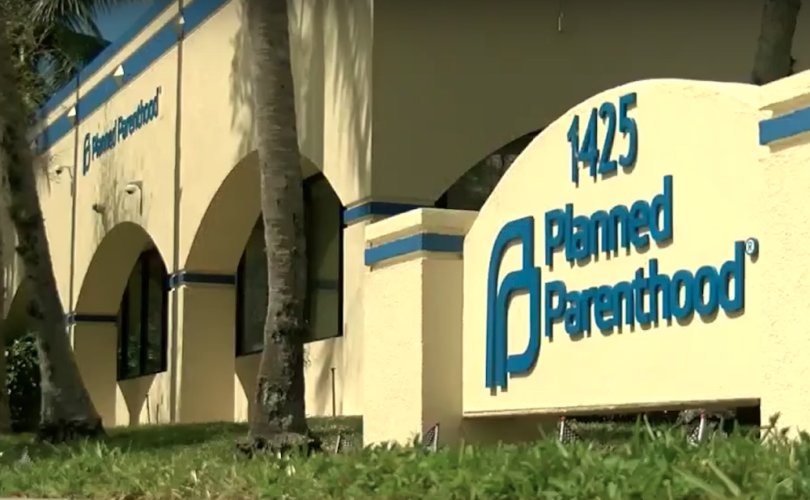 Every week, a group of pro-lifers gathers on the sidewalk outside Planned Parenthood Naples Health Center to pray, display signs to passersby, and persuade abortion-minded women to consider alternatives. The center, which started committing abortions in 2009, is across the street from a pro-life Community Pregnancy Clinics location.

Around 10:49 a.m. Monday, authorities responded to reports of an assault, the Naples Daily News reports. According to witnesses, a man who appeared to be in his mid-forties exited the building, took some pictures of the protesters, and then approached Joe Alger who was praying on the sidewalk.

“I saw one of our men, Joe, saying the rosary on the sidewalk. The attacker walked up to him and for several minutes he was verbally badgering him. The language was atrocious, it was horrible,” said Mary Claire Dant, a pro-lifer who saw the attack. “At some point he kept screaming, all of a sudden Joe was standing there, boom, he knocks him down onto the ground. Joe got up, as he gets up he pulls his arm and fist back and starts striking him. I heard bone on bone.”

Multiple witnesses told police and reporters the same thing, all agreeing that such violence was unprecedented. An ambulance took Alger to a nearby hospital to be treated for his injuries.

“I arrived, I saw an ambulance with police all over the place. They told me what happened, and at that point, I went to the ambulance and Joe was bleeding, he was quite bloodied up,” Fr. Michael Orsi, the parochial vicar of St. Agnes Church, told LifeSiteNews.

The assailant has not been publicly identified, but a man fitting his description was seen entering the back seat of a patrol car. Planned Parenthood “clinic escort” Paul Van Valkenburg, whose shift didn’t start until noon, told the Daily News he had been told the man was the husband of a woman at the facility for an unspecified service. Orsi relayed that he had been told a Planned Parenthood security guard might have pointed Alger out to the man and suggested “that he speak to our sidewalk counselor to tell him to end his activities.”

Orsi also stressed that the pro-life demonstrators were “trained at how to avoid violence and how to be Christian in everything they say and everything they do, not only in their physical actions but in their verbiage.”

“No arrests were made” following a preliminary investigation, sheriff’s department spokeswoman Krista Williamson said. Alger decided not to press charges, concluding “it’s a painful situation, and I’m not going to make it any worse.”

“There was an unfortunate incident at our Naples health center today when a fight broke out between a trespassed protestor and a patient’s support person,” said Planned Parenthood of Southwest and Central Florida spokeswoman Sarah Scully. “Our staff responded to the safety needs of both parties and our patients, and are now working with the Naples police to handle any follow up.”

Orsi questioned Planned Parenthood’s cooperation, noting that the facility claimed its security cameras couldn’t be reviewed because they happened to not be working.

Valkenburg, who wasn’t present until later in the day, also suggested Alger had trespassed on the abortion facility’s property earlier in the day, a charge Orsi is skeptical about. He had been told that a woman had told Alger she was afraid her daughter was at the facility to get an abortion, and asked him to go look if a certain type of car was in the parking lot.

“That’s the only thing I can think of that they would consider to be a trespass,” Orsi told LifeSiteNews. “There was nothing to that, that was a separate incident earlier in the morning.” He added that he had never before heard of a woman asking a prayer warrior to look for a car in a abortion center’s parking lot, and wondered if it was a setup to engineer a “trespass.”

In any event, Orsi said the incident was ultimately about a “very violent man” who may act out again, “ill will here on the part of Planned Parenthood,” and a rising tide of left-wing anger boiling over into violence.

“An organization that promotes violence inside is also going to promote violence on the outside,” he said. “And I think Planned Parenthood is becoming more and more desperate” between the Trump administration partially defunding the abortion giant and the impending midterm elections.

“There’s a certain meanness in the country right now, and you can see this everywhere,” he continued, referencing examples such as rioting Antifa protesters, leftist protesters harassing Republicans such as Ted Cruz in restaurants, and former Attorney General Eric Holder telling a crowd of Democrats, “when they go low, we kick them.”

“You get some people that have some violent tempers, people that are angry, and they’re going to act out, just as this man acted out on the sidewalk counselor,” Orsi warned. “I really think we’re gonna see more of this. People are being stirred up by the media, the politicians, I think some of them just don’t know how to handle it and they’re acting out violently.”

News of this assault comes a few weeks after a pro-life woman was roundhouse kicked by an abortion activist during a peaceful demonstration in Toronto.